Four Things To Watch For When President Trump Takes The Stage 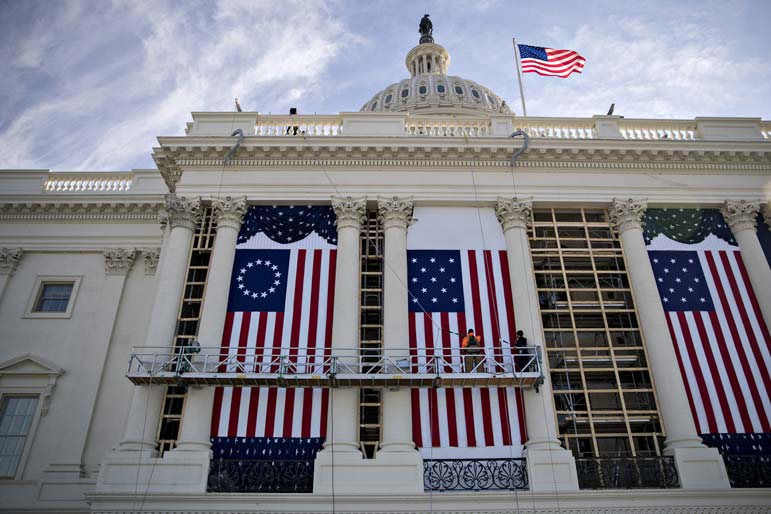 Workers adjust an American flag at the U.S. Capitol building during rehearsal for the 2017 Inaugural Ceremonies in Washington. Bloomberg photo by Andrew Harrer.

The temptation was to write something snarky about Donald Trump's swearing-in and inaugural address given that . . . well, it's Trump and we're still waiting to see if showbiz, showmanship and the Democrats' unrelenting urge to show him up can commingle.

Admit it: for some you, there's still a sense of disbelief that this is actually going down.

Besides, there's already enough product floating around the Internet poking fun at the situation. For example: this New Yorker cartoon that has the president-elect modifying the oath to Trump-speak: " . . . and will to the best of my ability, which is terrific ability, by the way. Everyone agrees, I have fantastic ability. So there's no problem with my ability, believe me."

So let's take the high road here. No snark. No drinking-game predictions like cutaways to Hillary Clinton's blank stare or Trump botching the oath - which, by the way, Barack Obama did back in 2009 (he later had to retake the oath).

Instead, here are four things I'll be watching as Trumps writes the first chapter of his presidency:

Length. Having drafted political speeches in a past life, I'm always sensitive to how many words it takes for an officeholder to get his or her point across. Brevity is more than the soul of wit - especially when rain's in the forecast.

Lincoln's second inaugural ("with malice toward none, with charity for all . . .") was a mere 700 words, two-and-a-half times the length of the Gettysburg Address. As most people speak at a rate of around 100 words per minute, it means Abe was in out in 10 minutes at the most.

John F. Kennedy's inaugural ("the torch has been passed to a new generation of Americans") - along with Lincoln's 1865 speech, the two that reportedly drew Trump's interest during his speech prep - weighs in at a more robust 1,366 words.

The over-under wager here: 15 minutes. It's not an unreasonable assumption: Obama did his first one in 18 minutes-and-change.

Besides, Trump wasn't elected with the expectation that he would bathe us in soaring rhetoric and poetic passages, as did his predecessor. I expect Trump to touch on what got him the job - the "forgotten" Americans in states he presumably couldn't win but did; the public's many frustrations with the political ruling class.

There is one theme that Trump should pursue . . .

Unity. Let's give Trump the benefit of doubt: he understands the significance of the moment and the challenge ahead.

My advice: take his critics head-on, but not as he does on Twitter.

As I write this, at least 68 Democrats plan to boycott the inaugural - a sad figure considering that only 240 Democrats populate the two chambers of Congress.


Trump should reach out to the truants, with words something like this: "To those of who decided not to attend today, I understand your concerns. And while I not agree with your choice, and we're not always going to agree to this nation's ailments and remedies, my door is open to all Americans of all persuasions who have a better idea for making this a better nation."

Should Trump want to mimic Lincoln or Kennedy?

The Lincoln address doesn't work - the nation's divided, but we're not getting over a military conflict.

But one Kennedy passage does appeal: "We observe today not a victory of party but a celebration of freedom - symbolizing an end as well as a beginning - signifying renewal as well as change."

It's an effective way for Trump to point out that the torch has been passed . . . to a new style and new approach to governing.

Will the media give Trump get credit for conciliatory words?

Still, he should consider acting as the bigger man on Friday, as the event could be marred by . . .

Blowback. A friend of mine who's inaugural-bound hopped a flight from San Francisco earlier today. Her report from somewhere over fly-over country: "This is actually a pretty tense flight. There are a good number of protesters on board and one in particular is sitting near me and is clearly agitated. She keeps yelling at everyone and swearing . . ."

Imagine what it'll be like when the ceremony begins.

Each day brings stories of protests that could mushroom into outright disruption - sit-ins, crashing the parade, blocking traffic at Metro stations.

The question: does any of this make its way into the inaugural itself - protesters unfurling flags, fights breaking off, police dragging way spectators? Do any protesters get close enough to Trump that their heckling becomes part of the audio feed?

Hopefully, some enterprising reporter will devote time, once this is over, to an accounting of who received the missing congressmen's guest passes - the balance between friends, constituents and professional rabble-rousers?

Impact. So has an inaugural address ever actually affected the course of the presidency?

Well, there's William Henry Harrison's drone-a-thon in 1841 and the assumption that the 68-year-old president's speaking outdoors for two hours on a damp winter day triggered his death a month later (a more likely cause: contaminated drinking water).

Others speeches stand out for their sound bites ("The only thing we have to fear" . . . "Ask not what your country can do").

More important than Trump's words in the moments after he's handed the job: his actions in the subsequent days, weeks and months.

From reversing the Obama to a full policy plate of his own, Trump has set the bar almost ridiculously high. We soon get to see how he adjusts from frenetic campaigning to the steadier beat of a presidency.

After the swearing-in and his address, Trump will lunch inside the Capitol. The rest of the day: a parade and social obligations. And the rest of the weekend: getting settled in.

Under the Trumpian Calendar, the first working of the new presidency isn't until Monday. Keep an eye on the first 100 days hours for what Trump can do swiftly and severely (executive orders reversing Obama edicts).

From there, it's the first 100 days and the question of Trump having a defining victory (Obamacare?). After that, the first 100 weeks, which takes us past the midterm elections.

That's a lot to anticipate. Which suggests the inaugural address is more than 15 minutes of fame. More like: the first aria in a long Wagnerian production.