Rubio is the man to watch in Tillerson's confirmation hearing 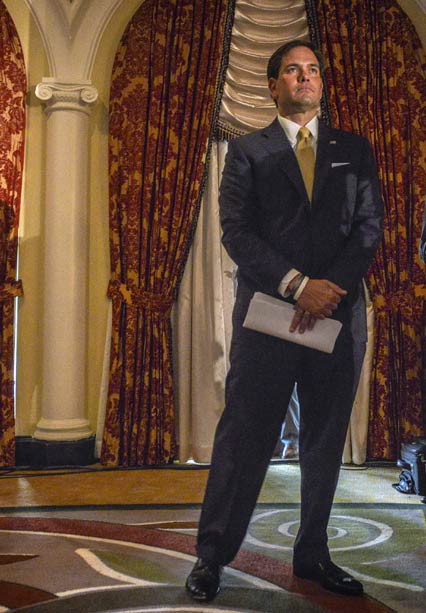 The most interesting person to watch in ExxonMobil CEO Rex Tillerson's confirmation hearing for secretary of state Wednesday - after Tillerson himself - is without question Sen. Marco Rubio, R-Fla.

The Florida Republican is likely to reveal what kind of future he wants in President-elect Donald Trump's Washington, and there are two broad possibilities. He could play a lead role in trying to torpedo Trump's pick for the nation's top diplomat, by turning his question-and-answer sessions with Tillerson into an aggressive attack on his economic ties to Russia and the honors bestowed upon him by President Vladimir Putin.

Or Rubio could be, well, more diplomatic, tempering his questions about Tillerson's global philosophy and Trump's own views toward Putin and paving the way for an easy confirmation.

Rubio's fellow hawks on national security issues will be watching closely to see which path he takes. Several of them have joined Rubio in criticizing Tillerson's credentials, but Rubio is the most prominent among them on the Senate Foreign Relations Committee, which is tasked with vetting the oil titan's qualifications. That puts equal parts of pressure on Rubio to voice that perspective - and to be careful about his relationship with the incoming administration.

"I will most certainly watch for Senator Rubio's questions and want to hear how that interchange goes," Sen. James Lankford, R-Okla., who is not on the committee but has concerns about Tillerson said Tuesday.

Sens. John McCain, R-Ariz., and Lindsey Graham, R-S.C., who are allied with Rubio on defense issues, have already staked out positions as antagonists toward the incoming president and his pick for secretary of state, seeking to keep the Republican Party on a more traditional stance of foreign policy.

Sen. Bob Corker, R-Tenn., meanwhile, the committee chairman, is playing the opposite role: serving as adviser to the incoming president and to Tillerson and trying to shape their views through positive persuasion.

Rubio has yet to signal which direction he'll take Wednesday, despite early claims of "serious concerns" about Tillerson's nomination.

A forceful attack on Trump's seemingly friendly stance toward Russia would win credit with many traditional GOP foreign policy experts, but it could renew the personal battles with the president-elect that played out during the Republican nominating contest. Once considered a rising star within the GOP, Rubio's presidential ambitions ended last year in an acrimonious trade of personal insults with Trump.

As word spread last month that Tillerson was the likely nominee, Rubio took to Trump's most preferred means of communication, Twitter, to criticize the CEO for being awarded the Order of Friendship by Putin a few years ago because of ExxonMobil's energy contracts in Russia.

"Being a 'friend of Vladimir' is not an attribute I am hoping for from a #SecretaryOfState," Rubio tweeted.

Rubio issued a more detailed statement suggesting that the next secretary of state must have "moral clarity" and be free of "conflicts of interest."

Several elder statesmen in the Republican foreign policy establishment quickly mounted a private campaign to quell Rubio's concerns on Tillerson, and Rubio has been circumspect ever since. He said little of substance Monday evening on his way to a meet Tillerson in his Senate office. A statement released later merely thanked the nominee for coming by; on Tuesday, Rubio told reporters only that he was going through "the process" of assessing the nominee.

The most critical line of questioning will likely come on Tillerson's views on sanctions against Russia, including new economic measures imposed by President Barack Obama in the wake of election meddling last year that the U.S. intelligence community has concluded was overseen by Moscow.

Tillerson has previously opposed sanctions that would have hurt ExxonMobil's economic interests in Russia, and Trump has signaled his intent to have a better relationship with Putin than Obama. He has only begrudgingly accepted the intelligence community's conclusion that Russian operatives tried to influence the presidential election.

McCain and Graham, neither of whom are on the committee, have already signaled their votes would likely depend on how Tillerson handles the Russia questions.

Some Democrats hope to shape those questions to divide the Trump and McCain wings on foreign policy and imperil the nomination.

"I think we'd be fools not to think about the issues that may end up weighing on Republicans on the committee," Sen. Chris Murphy, D-Conn., a member of the committee, said in an interview. "I cannot imagine how John McCain or Lindsey Graham or Marco Rubio could vote for Tillerson if he does not make a firm commitment to continue and expand U.S. sanctions against Russia. And yet I don't know how he makes that commitment given Trump's positioning."

Corker said the business executive is ready after his final meeting Tuesday with the nominee to prep him for the hearings, adding that as chairman he has followed up with most members of the committee after they met Tillerson.

"It's up to Tillerson to win over people, and my observation is he likely will," Corker told reporters. "There's nothing in our conversations with Tillerson that would point out to me he is outside the mainstream of Republican thinking on Russia."

Corker acknowledged that Rubio's exchanges would have an extra layer of significance, particularly on Russia, but he expects Tillerson to more than meet the moment.

"My guess is you're going to have people on both sides of the aisle, over and over again, pounding on issues like that, and my sense is that he will do a good job in responding. He certainly did in my office," Corker said.