The D.C. Women's March and Why I've Never Been a Feminist 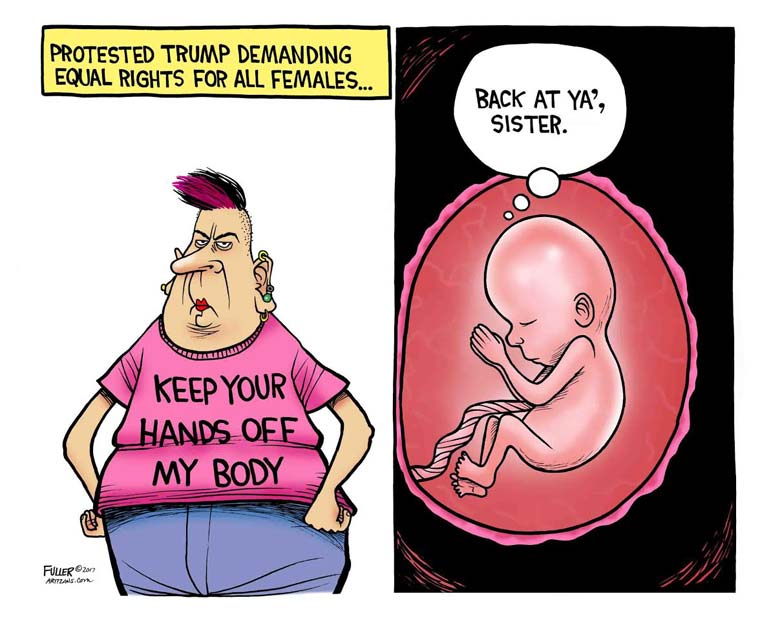 I was quite young when the women's movement began in the 1960's but there was something about the fierce rhetoric spouted by the movement leaders that turned me off.

Their speech was peppered with a lot of hate and resentment towards men but more than that, it hypocritically acted offended by phrases like 'Babe' and "broad" while we women routinely called men 'hunks' and in my neighborhood, 'guapo'. Then again the idea that I should burn my bra was beyond ludicrous and I felt that these feminists were light years away from the women who fought for our suffrage with dignity and faith.

Years ago, I received an email from an editor at the liberal Detroit News who expressed interest in my columns and the possibility of my becoming a columnist there. That offer was hotly rescinded by a female editor who read my column for IntellectualCapital.com that expressed amazement at the utter stupidity of some women voters and sarcastically suggested repealing the 19th amendment. Whew. I was told that I was not the type of writer that met their high standards.

At last Saturday's Women's March in DC any sign of humor was out shadowed by the stridency, anger and hatred spewed by speakers like Madonna and Ashley Judd who ironically stooped to the coarseness and crudeness they despise in our new president. I really can't imagine Susan B. Anthony and the other suffragettes uttering four letter words and reading obscene poems alleging incest at their rallies for equal rights.

These brave women who fought valiantly for equal rights dedicated their battles to three issues-abolition, temperance and women's suffrage. The right to terminate the lives of women's unborn children was rarely discussed publicly but in private diaries, it was considered an abomination.

The overwhelming message, however, in the Washington March was the fight to protect women's reproductive rights and it is clear that the Trump administration presents a threat to Planned Parenthood.

Abortion, euphemistically clothed in the more acceptable pro-choice mantle, has long been the war cry for militant feminism and liberals but one fact about Roe v Wade is always ignored. It was passed through deception and bald faced lies and probably benefited men and radical medical researchers more than the average woman. These marchers do not care that Planned Parenthood sold human fetal parts because they have lost all ability to reason with facts.

To sell the Roe V Wade decision to the SCOTUS and the general naive public, Bernard Nathanson, co-founder of National Association for the Repeal of Abortion Laws (NARAL), admitted that they just made up the number of deaths from illegal abortions. It wasn't 10,000 but a little over 100. He said:

"We fed the public a line of deceit, dishonesty, a fabrication of statistics and figures. We succeeded because the time was right and the news media cooperated. We sensationalized the effects of illegal abortions, and fabricated polls which indicated that 85 percent of the public favored unrestricted abortion, when we knew it was only 5 percent. We unashamedly lied, and yet our statements were quoted [by the media] as though they had been written in law."

As I wrote in my last column, "The Brainwashing of a Nation," the tactics of the Marxist left is still going strong and was in clear view in DC. It is so sad to watch my gender march for changes that are not even necessary while they spout the talking points of the deceitful mainstream media.

When I hear these celebrities that are wealthy and free of the problems that so many of us have to deal with on a daily basis screaming and bitching about an election that disappointed them, I can't help but wonder how anyone can take their antics seriously.

I am not a feminist but I am a woman and once upon a time, this country had many of us who knew how to take care of ourselves without expecting the government and lawyers to rescue us. The stronger women who march to a different drummer than the pink 'Pussy" hatted, vagina costumed DC marchers, will be marching on Jan. 27 in the March for Life. The wonderful Kellyanne Conway will be one of the event's speakers. I can guarantee that the MSM will ignore and fudge the numbers of the turnout.

The day that women march for the support for all women being abused and enslaved by Sharia law in the Middle East and throughout Muslim countries is the day I'll march with them. Until then, these feminist demonstrations are really just a waste of my precious time.