Grayer but not wiser: A president who's an underachiever and proud of it 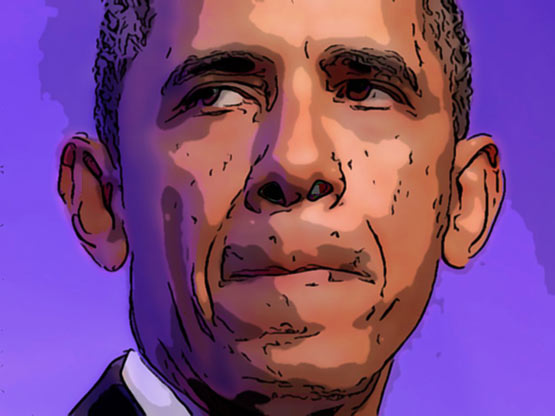 Presidential State of the Union addresses have something of a checkered past.

What started as an "annual message" in 1790—all the U.S. Constitution dictates is the President "shall from time to time give to the Congress information of the State of the Union"—nominally changed in 1946, then crept into television's prime time beginning in 1965.

In 1981, Ronald Reagan took the big speech in yet another direction, not for the better: "heroes" in the House gallery. Reagan did it to salute an average Joe named Lenny who jumped into an icy river to save a plane-crash survivor. Since then, it's been a seemingly inexhaustible supply of human props meant to back a presidential agenda. A pathway to America's future, it would seem, must include a little pathos.

In this respect, it might be the highlight of President Obama's final State of the State, the 82nd to be delivered in person on Capitol Hill since Woodrow Wilson broke with tradition way back in 1913. He loaded up the gallery with props, but didn't go for cheap applause lines by singling out "hero" after "hero."

There was a rambling oration about life in the America he envisions—a curious cross-section of ordinary folks who get rewarded for their work, run in marathons, cast their first votes as new citizens, protest for justice and embrace their courageous gay offspring (methinks someone at the White House is watching too much Modern Family).

First, this was an oration by a president not so much leading a nation or forging common ground as he is trying to insert himself into the middle of the presidential election—his agenda being his party's. (That's a big roll of the dice, given that America isn't wild about Obama these days—his approval rating a wobbly 44.7% per the last Real Clear Politics Average).

There's nothing wrong with an eighth-year president wanting to take a victory lap, real or imagined. Ronald Reagan engaged in a little of it—the economic recovery—in 1988. George W. Bush did as well. In 2000, Bill Clinton ventured deeper into self-idolatry—no surprise for a man who took an entire day to leave Washington the day he moved out of 1600 Pennsylvania Avenue.

But with Obama, the self-importance was too much. It started and ended with the invocation of hope and change and the not-so-veiled notion that the 44th President isn't merely the leader of one political party but a class of more enlightened Americans. That presidential Teleprompter? Barack Obama found a way to turn it into a selfie-stick.

Second, and this has been the problem with this presidency since its inception: Obama, for one last time, proved that he's failed to grasp that fixing a dysfunctional Washington always required recognizing himself not just as part of the solution but also as a big part of the problem—something seemingly beyond his political makeup.

No such humility was on display last night. There were gentle swipes at Congress—the only workplace, Obama said, that guarantees 30 years of job security and guaranteed healthcare. His explanation that America dominates the globe was condescending (I understand the world, you don't) and wholly unconvincing.

Moreover, the President neglected to do the one thing we expect in our leader: prove that he has his finger on the public's pulse. With a nation on edge due to domestic terrorism, Obama delved into guns, not radical Islam. Speaking to a public that wants an answer to ISIL's barbarities, he drifted into his University of Chicago professorial mode of lecturer-in-chief. Small wonder some members of Congress had that Ben Stein/Ferris Bueller eyes-glazed-over look.

Third—and this may be most distressing takeaway: the Obama presidency is out of new ideas.

An address delivered by a Democratic president and probably inspired by Democratic focus group will only move the needle with—surprise—the party faithful.

Consider this speech model: Mr. Obama opened with four favorite liberal chestnuts: a "fair shot" for all; technology that will address climate change; for the "Feel the Bern" crowd, keeping American safe without becoming the world's policeman; and making politics better (watch out, Koch Brothers).

And then the obligatory segue into free stuff. The President wants to provide universal pre-school, give every student "hands-on computer and math classes," "recruit and support" more teachers and offer two years of free community college.

There was one big domestic idea in the address—Vice President Joe Biden leading a "moonshot" effort to fund a cure for cancer.

But here too, looks are deceiving. Biden, who tragically lost a son to cancer last year, has been talking about this for months now. Moreover, for all of cancer's awfulness and the universal desire to rid the world of the scourge, the 40-year "war on cancer" that began with 1971's National Cancer Act hasn't panned out as hoped. As with many an Obama initiative, more government may not be the soundest approach.

All of which raises this question: is this the kind of performance that thrills Hillary Clinton?

With the exceptions of Herbert Hoover in 1928 and George H.W. Bush in 1988, presidential nominees never win with a "third-term" message. The staleness of the Obama agenda underscores why.

Then again, Hillary may feel offended. The 2016 candidate foremost on the President's mind isn't her. It's Donald Trump. How else to explain the presidential spiel on hatemongers who bash Muslims?

The first time he stood before a joint session of Congress, in February 2009 as a newly elected president, Barack Obama finished his address with this passage: "I know that we haven't agreed on every issue thus far, and there are surely times in the future when we will part ways. But I also know that every American who is sitting here tonight loves this country and wants it to succeed. That must be the starting point for every debate we have in the coming months, and where we return after those debates are done. That is the foundation on which the American people expect us to build common ground."

His final speech was more of the same: flowery, over-dramatic rhetoric about too much rancor and suspicion in politics, voters deserving better, the desire for a more elevated debate in Washington that we don't get because members of Congress (not the President, mind you) are flummoxed by partisan limitations and selfish reelection concerns.

It's a familiar sentiment—and by now, a tired one. Yet the President keeps trotting it out each instance he sees a chance to elevate himself above the political morass.

The first time President Obama road-tested this before Congress, Nancy Pelosi was seated behind him, Speaker's gavel in hand. The final time Obama got to say it, Paul Ryan had taken her place—Ryan only in the chair because of an insurrection against a Republican House Speaker preceded by a national insurrection against a Democratic president.

Is Barack Obama solely to blame for a squandered opportunity these past seven years? Of course not. But his final State of the Union left the impression of a president who's grayer but not wiser and a presidency that, like Bart Simpson, bears the label "underachiever and proud of it." According to this CBS News/New York Times poll, only one-third of Americans believe his presidency exceeded their expectations. And so it was, too, with his last State of the Union. A lot of soaring high, only for everything to fall flat—very flat.