Congress continues to degrade itself 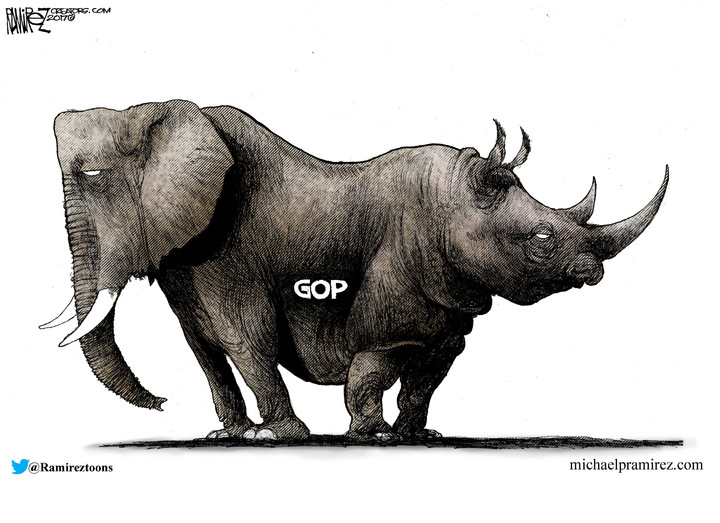 In January 1988, in Ronald Reagan's final State of the Union address, he noisily dropped on a table next to the podium in the House chamber three recent continuing resolutions, each more than a thousand pages long. Each was evidence of Congress' disregard of the 1974 Budget Act. Reagan fumed:

" ... budget deadlines delayed or missed completely, monstrous continuing resolutions that pack hundreds of billions of dollars' worth of spending into one bill, and a federal government on the brink of default. ... In seven years, of 91 appropriations bills scheduled to arrive on my desk by a certain date, only 10 made it on time. Last year, of the 13 appropriations bills due by October first, none of them made it. Instead, we had four continuing resolutions lasting 41 days, then 36 days, and two days, and three days, respectively. And then, along came these [three] behemoths."

Reagan might have been less cross if there had not then been Democratic majorities in the House (258-177) and Senate (55-45). Today, however, Republicans have both political branches in their hands. How are they doing with the government's basic business -- budgeting and appropriating? James Arkin, a congressional reporter for Real Clear Politics, recently wrote a four-part dissection of Congress' ongoing dereliction:

Neither the House nor the Senate has passed the fiscal 2018 budget resolution that the Budget Act of 1974 stipulates should have been acted on by April 15. Neither chamber has passed any of the 12 appropriations bills that are supposed to be passed by the Oct. 1 beginning of the fiscal year.

On-time passage of the appropriations bills has not happened since 1996. Continuing resolutions involving "hundreds of billions of dollars' worth of spending" that annoyed Reagan three decades ago have become continuing resolutions involving more than a trillion -- not counting the two-thirds of government spending (e.g., entitlements, debt service) that happens without congressional involvement. As Arkin's analysis was appearing, the Social Security and Medicare trustees projected the former's insolvency in 2034 and the latter's in 2029.

Remember all this while watching Republicans fumbling with the health care sector that is approaching one-fifth of the U.S. economy and is larger than all but four of the world's national economies. Remember, too, Republican umbrage about the Senate auction by which the Obama administration threw money at the problem of cobbling together Democratic votes to pass Obamacare. Remember the "Gatorade" for a Floridian, the "Cornhusker Kickback" for a Nebraskan, the "Louisiana Purchase" for a Louisianan.

Legislative bargaining is inherently additive: Eighteen months ago, Barack Obama proposed $1.1 billion over two years for responses to the opioid crisis; the Republican Senate leadership's initial offer -- the bidding is ongoing -- is $45 billion over 10 years, which makes Republicans about eight times more caring, so far, than Obama was, as that virtue is measured monetarily.

Legislative bargaining can be addition by delayed subtraction: The Washington Post has reported, and Wisconsin Republican Sen. Ron Johnson says other senators have "basically confirmed," that Majority Leader Mitch McConnell told Senate moderates not to fret about the Medicaid changes that Senate conservatives want to begin years hence, because (in Johnson's words summarizing reports of McConnell's words), the changes "won't take effect." McConnell's not-altogether-clarifying response to these reports was: "The Medicaid per capita cap with a responsible growth rate that is sustainable for taxpayers is the most important long-term reform in the bill."

The debate that began in the Senate Tuesday afternoon will reveal whether Republicans are, in the words of Pennsylvania Republican Pat Toomey, unwilling to enact a "slight curb" in the rate of growth, "in the distant future," of Medicaid, the entitlement "that is growing most rapidly, and is equal to 70 percent of our budget deficit."

America is sleepwalking into the most predictable crisis in its history, the demographically driven crisis of the entitlement state struggling to provide health care for an aging population. And the Republican Party is led by a president who, as a candidate, pledged to guarantee the acceleration of the crisis by preserving the status quo.

Tuesday afternoon, the irascible John McCain made a plea in the Senate for that body to return to "regular order." This was a response to the institutional slovenliness that exasperated an amiable president three decades ago.

Congress's continuing self-degradation is writ large in a process that brought us to Tuesday morning, when most Republican senators knew only this: They would vote to begin consideration of a bill that they might have to pass in order to find out what is in it.