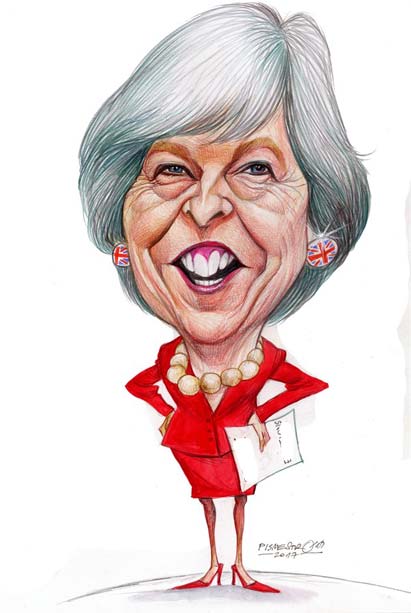 LONDON -- The poet Rupert Brooke voiced the exhilaration of those Britons who welcomed the war in 1914 as a chance to escape monotonous normality, "as swimmers into cleanness leaping." They got four years mired in Flanders' mud.

In a 2016 referendum, Britons voted, 52 percent to 48 percent, for the exhilaration of emancipation from the European Union's gray bureaucratic conformities. They thereby leapt into a quagmire of negotiations with an EU determined to make separation sufficiently painful to discourage other nations from considering it.

On Tuesday, Parliament emphatically rejected the terms of separation that Prime Minister Theresa May negotiated with the EU. So, there is no majority, in Parliament or the country, for anything other than, perhaps, a second referendum, which might be impossible to organize before the March 29 deadline for leaving the EU -- although the EU might extend the deadline, hoping for a British reversal.

Another democracy recently rethought something momentous. On Sept. 29, 2008, with the U.S. financial system nearing collapse, the House of Representatives voted 228 to 205 against the George W. Bush administration's bailout plan. The Dow promptly plunged 7 percent (777 points off 11,143) and four days later the House reversed itself, 263 to 171.


Britain's 2016 referendum came hard on the heels of the 2015 surge of asylum-seekers into Europe. Much more than the margin of Brexit victory probably was provided by anxiety about Britain's and Europe's social cohesion. Since then, however, the immigration issue has cooled: Those identifying it as "the most important issue confronting Britain" plummeted from 48 percent in June 2016 to 17 percent in October 2018.


Of the four nations that comprise the U.K., Scotland and Northern Ireland voted Remain, Wales and England voted Leave. Many Remainers disparage many Leavers as "English nationalists."


Brexiteers can cite a noble pedigree for their sentiments: Speaking in 1933 to the Royal Society of St. George, Winston Churchill said: "On this one night in the whole year we are allowed to use a forgotten, almost a forbidden word. We are allowed to mention the name of our own country, to speak of ourselves as 'Englishmen.'" The EU has dangerously promoted the blunderbuss principle that nationalism -- the belief that one's nation has uniquely admirable aspects -- is always dangerous. This principle stigmatizes normal and often defensible judgments.


In 2016, many Brexiteers had an aspiration with a glistening pedigree -- Churchill's vision of British greatness ensured by looking not across the English Channel but across the Atlantic to ever-closer relations with what Churchill called "the Great Republic." This prospect lost luster when, 138 days after the referendum, that republic elected Donald Trump, whom many of Charles Darwin's countrymen think evolution passed by.


Diminishment and loss of control have been recurring British anxieties since the nation emerged depleted from World War II. In the Brexit debate, references to Suez have rekindled painful memories of the 1956 British-French-Israeli invasion intended to reverse Egypt's nationalization of the Suez Canal. The invasion was halted by a furious President Eisenhower using the leverage of Britain's financial weakness. Brexit is an attempt to revive national control and stature. It is subtracting from both.


Brexiteers believe that the fact that leaving the EU has proven to be so difficult a prison break validates Euroskepticism. They ask: Britain, which has been in the EU since 1993, was self-governing since the Romans departed in 410, so how calamitous can Brexit be? Very, respond Remainers, with increasing plausibility as the prospect of a "hard Brexit" -- divorce with no new U.K.-EU legal and commercial relationships in place -- becomes more probable.


Economic globalization, with the increasing importance of just-in-time inventory management of complex supply chains, raises the stakes for Britain, whose trade with the EU far exceeds its trade with either America or China. Steep tariffs and other controls could snap into place March 29, and The Wall Street Journal reports that officials at the Port of Dover "estimate that for every two minutes of delay trucks experience before embarking [on cross-Channel ferries], a 17-mile traffic backup will be created on the M20 highway heading to the port."


May's stolid pursuit of other people's goal -- in the referendum she voted Remain -- has evoked the criticism that "stamina is not a strategy." Actually, it might be: As the March 29 deadline for leaving the EU draws near, her agreement might seem marginally less unpalatable than, and the only alternative to, a hard Brexit, which could be "into chaos leaping."