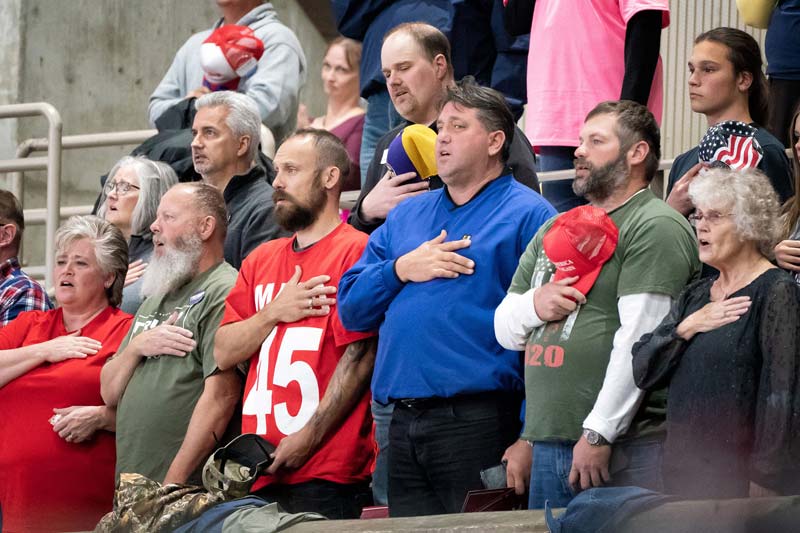 Just in time for comes a former male stripper, who drove a van with Trump stickers plastered all over it, being charged with sending pipe bombs to top Democratic leaders, a journalist and at least one celebrity, all of whom have been vocal critics of .

reported that the accused, ., was said to be lost and a "sick individual" who is estranged from his family, but eventually "found a father" in . He also hates his mother, according to , his attorney.

Well, yes, you wouldn't expect a stable individual who loves his mother to do what Sayoc is accused of doing.

Predictably, many of those who were targets of Sayoc's pipe bombs, some of which were incapable of exploding, are blaming for inciting people like Sayoc to go beyond verbal attacks and engage in dangerous, unlawful behavior.

Some on the right point to language used by Rep. (D-CA), former Attorney General , former President and others ( published a review of a novel, the plot of which revolves around the assassination of with the aid of a rogue agent). Those conservatives claim that left-wing rhetoric is mostly responsible for widening the political divide and polluting civil debate.

How about each side taking responsibility for its own language and behavior? People attending Trump rallies dislike big media, but their rants haven't changed what conservatives believe is biased reporting. Why don't some in the Trump crowd invite a reporter to lunch and calmly explain their feelings and political points of view?

On the left, why don't some of those people confronting out for a quiet dinner with family and friends respectfully ask for an appointment to explain why they oppose Republican and conservative ideas and offer their own proposals for making America better? Whose mind is changed when their dinner is interrupted by people accusing them of treason?

As a conservative, I understand the anger felt by many on my side about the way our political positions, faith and worldview are portrayed by the media and wider culture, but behaving as conservatives sometimes do only reinforces long-held stereotypes in the minds of secular progressives who think of us as uneducated Bible-thumpers, intolerant, judgmental and a "basket of deplorables."

While many in mainstream media deplore everything for which the right stands, I think they secretly enjoy the conflict because it boosts ratings and sells newspapers. Conflict always attracts a larger audience than comity, but that is no excuse for contributing to the conflict.

Our anger at government and politicians solves nothing. The country is divided. It has always been that way. The focus should be not on winning a war of words, which is impossible so long as the name-calling continues; the focus should be on winning the battle of ideas and what works best in promoting the welfare of most Americans.

If that sounds naĂŻve in our polarized environment, what would you suggest? Clearly, what we are engaged in now isn't working. As the late sang, "Try a little kindness." It's better than sending bombs through the mail. It's also better than behaving rudely in restaurants.