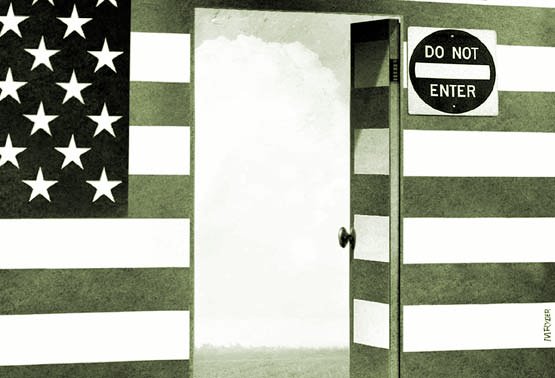 "They're Coming to America" — Neil Diamond

The numbers are staggering. Should we call them invaders instead of migrants, since that word better describes the hordes of humanity coming across what used to be our southern border, a border that has been effectively erased? In March, the COVID positivity rate for those breaching our border was about 6 percent. Many of these people cannot speak English and have few job skills other than manual labor. Recently, a convicted sex offender was one of 35 migrants arrested in Texas for entering the country illegally. An Afghan evacuee has been charged with raping a woman in Missoula, Montana. We are beyond a crisis and are now experiencing a disaster.

The overwhelmed Border Patrol reports nearly 200,000 encounters with migrants in July, alone. It was the highest monthly total in more than two decades. This doesn't include the "gotaways," which some estimate are as high as 400,000. According to the Brookings Institute, the number of undocumented immigrants living in the U.S. as of 2019, ranged from 10.5 to 12 million, or about 3.2 percent to 3.6 percent of the population. The numbers have grown considerably since then.

They are not finished coming. Why should they stop when coyotes and other traffickers promise free stuff courtesy of the U.S. taxpayer? Last Saturday morning, as many as 4,000 migrants broke through a clearly ineffective Mexican National Guard roadblock in Tapachula, Mexico. They were on their way to Mexico City. The U.S. was their final destination. I'd like to know who is paying for their transportation, food, and signs written in both Spanish and English for the TV cameras? Some signs praise President Biden. No longer limited to Latin countries, the latest wave includes Haitians.

We have heard promises by former President Obama and President Biden about their pledge to "fundamentally transform America." Is this what they mean? Why don't they tell us what their new America will look like and then put it to voters in the next two elections to see if they agree?

The image of migrants recently flown in the dead of night from Texas to Westchester, New York, and Jacksonville, Florida, does not speak well of the administration's motivation. It reminded me of the Baltimore Colts football team sneaking out of that city for Indianapolis some years ago because they wanted to avoid the bad publicity some apparently thought the move would bring to management. As the Scripture says, "Men love darkness rather than light because their deeds are evil." (John 3:19)

If those tearing down statues, re-writing or spinning history to fit contemporary political goals, and treating parents of children in public schools as the enemy have the ruining of the America most of us love as their objective — even with flaws we have worked hard to fix — they are well on their way to a nefarious victory.

None of this would likely have occurred if the Biden administration were not so spiteful about Donald Trump that it refused to finish the border wall so that we could slow the migrant flow and direct migrants to areas where their asylum claims could be properly assessed.

America is fragile. Its values must be renewed in every generation, or we risk losing them. What is happening at what used to be our southern border is a scandal and a disgrace. Administration officials need to enforce the laws they took an oath to uphold.

The next election cannot come soon enough, but if the flow continues at the current, or a greater pace, it may be too late to reverse the harm being done.