Harris and the Hatch Act 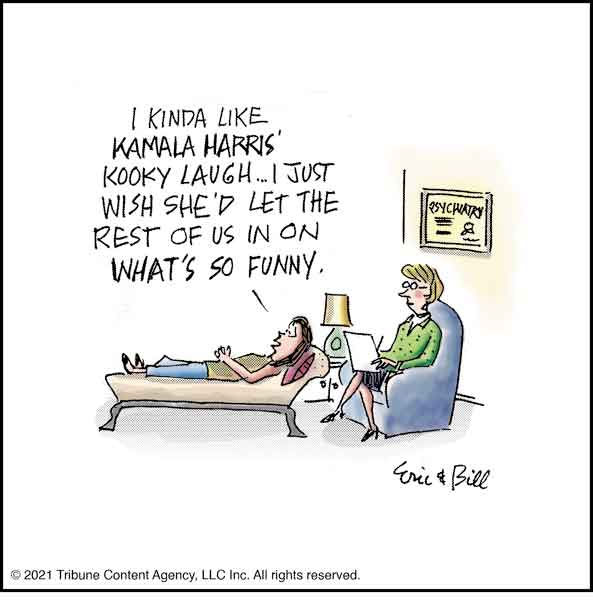 Vice President Kamala Harris, who appears to be in the witness protection program when it comes to her assigned role of restoring our southern border, has re-surfaced in a video she sent to 300 Black churches in Virginia. In it, she calls on congregants to vote for Democratic candidate for governor, Terry McAuliffe. She even reminds them they can vote on Sundays and urges them to do so following their church service, presumably after worshipping an Authority higher than the state.

Did Harris just violate the Hatch Act? The Hatch Act says of employees of the federal government: "an employee may not use his official authority or influence for the purpose of interfering with or affecting the result of an election." Iâ€™m sure "getting out the vote" for McAuliffe qualifies.

In the video, Harris touts what she says was McAuliffeâ€™s record during his previous governorship from 2014 to 2018. She claims he brought thousands of jobs to the state. Former President Donald Trump also made this claim. But the Biden administration gives no credit to Trump for anything, though it has quietly restored some of his policies, such as requiring migrants to remain in Mexico while their asylum claims are processed.

Some other takeaways from the Harris video include her failure to mention anything the current Democratic governor, Ralph Northam, has done. It is as if Northam has been erased from memory, like the Soviet Union used to do with leaders who had fallen out of favor and whose photographs were scrubbed from official ceremonies, and ultimately history, to service the Bolshevik propaganda machine.

In the video, Harris says when she attended church in Oakland, California, "it was our sacred responsibility to raise our voice and to lift up the voices of our community." Translation: vote for Democrats, though their track record is less than admirable when it comes to serving Black and brown communities. For Democrats, African Americans never seem to succeed and are always in need of government. Why? To do what? Reduce shootings in the streets of our major cities? Create and keep families together? Give parents an opportunity for their children to escape failing public schools and allow them to choose a school that provides a real education in a safe environment? None of the above. It is in Democratsâ€™ self-interest to keep African Americans loyal and beholden to their party, though so little is given in return.

When a liberal Democrat "talks G od" there is no criticism from the advocates of church-state separation because the left, which now dominates that party, knows they arenâ€™t serious. You can call yourself anything you want so long as you ignore the instructions, admonitions, and salvation message of Scripture.

Thatâ€™s why Roman Catholics like President Biden and Speaker Nancy Pelosi seem to get away with proclaiming themselves "faithful Catholics" yet ignore — even oppose — their churchâ€™s teaching on abortion, marriage and homosexuality. As long as you are for the same policies advocated by secular progressives you can be "religious," and the left doesnâ€™t care.

Democrats who have told conservative Christians they should not try to impose their beliefs through government obviously have no problem imposing misinterpretations of Scripture and even non-beliefs through government and judicial fiat. Some are even inconsistent in those beliefs, accepting their churchâ€™s teaching when it opposes the death penalty for murderers, but rejecting teachings that seek to protect unborn human life.

By sending a video to Black Virginia churches, Harris is guilty of the same condescension we have seen for years within her party when it comes to certain demographics. If government is the answer, would it not have succeeded by now with so many programs enacted and so much money spent?

Will Harris be held accountable for violating the Hatch Act? Of course not. Washington always protects its own, unless the person is a Republican, or Donald Trump.