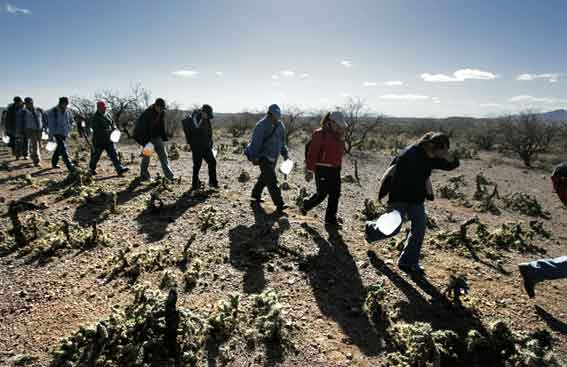 Britain's Home Office says more than 12,500 migrants have broken the law to get into the UK so far this year. Compare this to the nearly 200,000 migrants who have crossed the nearly nonexistent southern border just in July of this year.

The count is estimated by the overwhelmed U.S. Customs and Border Protection, a name that is almost contradictory given the Biden administration's refusal to enforce the law and secure the border. It helps that Britain has a natural channel separating it from the continent, while our border resembles Swiss cheese.

If a picture is worth a thousand words, how many words are necessary to express alarm when one looks at the "dozens of stacked columns of steel" worth $100 million dollars lying at the border? This is material that was supposed to finish a portion of the wall to reduce the flow and discourage new migrants from coming.

In another spiteful move, the Biden administration has canceled all contracts with companies selected during the Trump years to build the wall. That's taxpayer money going to waste.

No one should consider this "invasion" a happenstance. If these were soldiers coming into the country from other nations, presumably even this administration might do something about it. These are soldiers of another kind, who are untested for COVID-19, harming our economy by sucking up "benefits," bringing crime and in some cases possible terrorism.

The Center for Immigration Studies (CIS.org) makes a point I have not seen elsewhere. It contends that several countries, supposedly allies of the U.S., are complicit in enhancing the migrant flow: "â€¦the United States has never seen fit to publicly acknowledge that Colombia, Panama, and Costa Rica are doing this to the American people. The American public hardly knows of it. Nor has the United States sought to diplomatically leverage any of the governments to instead disrupt, slow, or outright halt the flows of people long before they reach Mexico. This strange state of tolerance and American public ignorance, even during the Trump administration, endures, despite the fact that all three of these nations are ideally positioned as trail-route bottlenecks where new U.S. strategies can significantly attenuate the problem if all involved simply acknowledge that it is happening and there is a political will to press for a solution."

Is this not what is happening at the border? Did not the president (and his attorney general) take an oath to uphold the laws of the United States?

As CNN reported in 2019, "Joe Biden once spoke about jailing employers who hire â€˜illegals,' said sanctuary cities shouldn't be allowed to violate federal law, and argued a fence was needed to stop â€˜tons' of drugs coming into the country from â€˜corrupt Mexico.'" Nothing has changed in the last two years, except Biden's position.

If you are watching the right TV channels, you are seeing how a country is destroyed. History â€“ depending on who writes it â€“ will rightly blame President Biden.