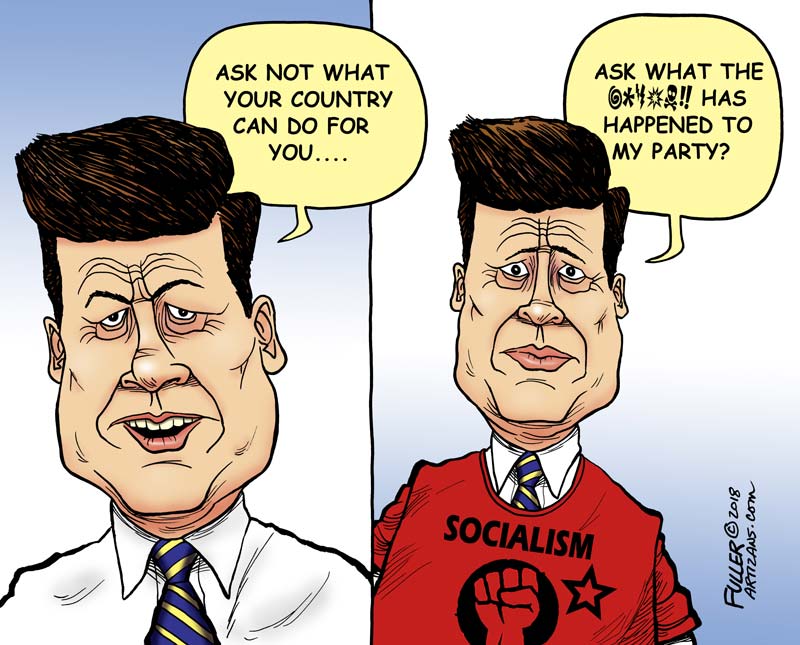 In his address to Congress on Dec. 8, 1941, following the Japanese attack on Pearl Harbor, President Franklin Roosevelt said: "... we will not only defend ourselves to the uttermost but will make it very certain that this form of treachery shall never again endanger us. Hostilities exist. There is no blinking at the fact that our people, our territory and our interests are in grave danger. With confidence in our armed forces, with the unbounding determination of our people, we will gain the inevitable triumph, so help us G od."

Compare that powerful address with President Bidenâ€™s threat following the deaths of 13 U.S. troops and at least 90 Afghans last week outside Kabul airport: "We will hunt you down and make you pay. I will defend our interests and our people with every measure at my command."

In his 1961 inaugural address, John F. Kennedy pledged, "Let every nation know, whether it wishes us well or ill, that we shall pay any price, bear any burden, meet any hardship, support any friend, oppose any foe, in order to assure the survival and the success of liberty."

Granted, the world has changed significantly since FDR and JFK, and now a feckless president with low credibility makes a promise that will not be kept. How can it when there will be no Americans in Afghanistan to hunt anyone?

Biden has done more to harm American interests and security than perhaps any other U.S. president. He sounds and looks weak because he is weak. This has not gone unnoticed by terrorists, as well as Iran, China, Russia and others who do not wish us well.

Perhaps the most discouraging part of Bidenâ€™s remarks was his continuing obsession with blaming former President Donald Trump for the Afghanistan debacle. True, Trump floated the idea of inviting unreliable Taliban leaders to Washington and even Camp David to reach a deal to end the war, though he never did. Critics apparently forget that Bill Clinton did invite Yassir Arafat to Camp David.

The "treaty" then-Secretary of State Mike Pompeo concluded with the Taliban worked. No U.S. soldiers were killed during an 18-month period. There were probably two reasons. First, the Taliban thought they could patiently wait out America, because based on our withdrawal from Vietnam, they believed we would not stay "forever," and second, because Trump had specific requirements for the Taliban to meet or the deal would be off. It is hard to imagine, as much as Trump wanted to stop "endless wars," that he would abandon Afghanistan altogether without at least a minimal U.S. presence to deter terrorists who wish to again attack America.

Biden claims the military was on board with his decision to withdraw all forces from Afghanistan. That is difficult to believe, unless leaders have gone completely woke, focusing on diversity instead of on winning current wars and preparing to defend us from the possibility of future ones.

The drone strike last week that the administration says killed an ISIS-K leader is more likely a one-off than an effective military strategy for diminishing the threat of more terrorism.

The president had promised to reach out to our allies. "America is back" he repeatedly said. He had chastised Trump for "going it alone" and pledged to include allies in decision-making. He did just the opposite with a unilateral decision and an arbitrary pullout date, leaving our allies to effectively fend for themselves. They will likely be cautious about joining a future American military coalition when new threats emerge.

When speaking of our national debt, Democrats frequently say that "the full faith and credit of the United States" is on the line if the debt ceiling isnâ€™t raised and our bills paid.

America under Joe Biden has demonstrated its faithlessness and unreliability. This will have serious implications for our immediate and long-term future. Should there be another terrorist attack on our homeland — something that seems likely — the blood of the dead will be on the hands of President Biden, no matter who he tries to blame.