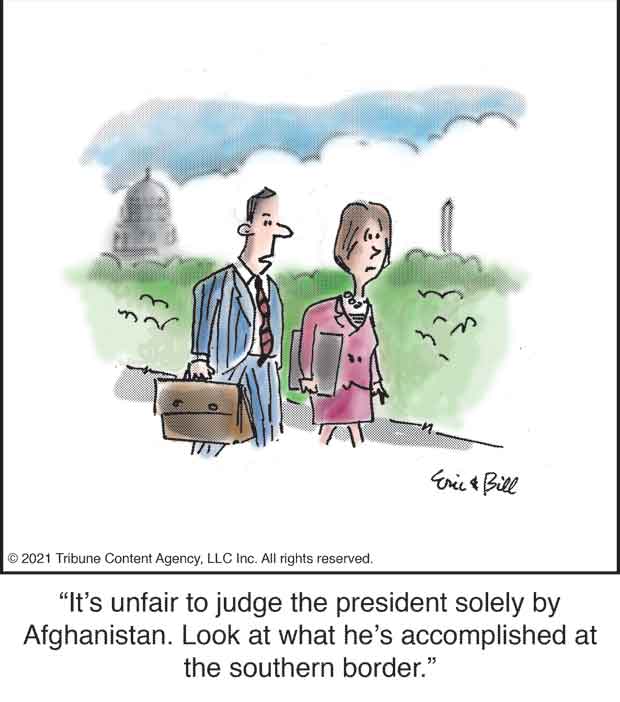 Only in America, it seems, can border patrol agents be cleared of breaking any laws but still be punished, while those entering the country illegally mostly escape punishment.

Biden had threatened the agents, saying they would "pay" for their actions. They have paid in lost time on the job, the smearing of their character and probably an end to their careers. It is the administration that should pay. One hopes the agents will find a lawyer who sues them for slander.

In a 511-page report (only the government requires so many words to explain the obvious), Customs and Border Protection said the agents did not whip the migrants, who managed to get across the border anyway, but added they are still guilty of "unprofessional conduct," including using "unnecessary force on Haitians."

Apparently, some of the agents used bad language while trying to turn the people back. Shocking, I know. Were they supposed to say: "Would you pretty please turn around and go back to your country?"

Texas Attorney General Ken Paxton has joined other Republicans in calling on President Biden and others to apologize to the four agents they falsely accused. Good luck with that. Being a high government official means never having to say you're sorry. Paxton said instead of being punished, the agents "should be rewarded."

Texas Governor Greg Abbott is trying to do the job the Biden administration has so far refused to do by sending migrants who cross into his state back to an established crossing point where they can be processed. The administration opposes the move and is suing Texas to try and stop it.

Yes, I understand that immigration is the constitutional responsibility of the federal government, but what's a governor to do when his state is being overrun by migrants, some of whom they say are destroying private property and committing other crimes, including rape and murder?

In Richmond, Virginia, two men in the country illegally were arrested prior to what authorities say was a plot to conduct an act of terrorism on July 4. Someone heard something and said something, preventing what might have been a tragedy had the men been able to proceed with their alleged plot. One of the men reportedly had been deported twice before.

If Republicans achieve a majority in the House and Senate in the November election, their top priority must be securing the border and restoring a legal process for those seeking to enter the country. President Biden is likely to veto any legislation passed by Republicans to achieve that goal, but if there are enough Republicans in Congress his veto can be overridden.

It isn't just those breaking our laws to get here that is a continuing problem, but also the large amounts of the deadly drug fentanyl coming in. Fentanyl now ranks No. 1 on the list of biggest killers of 18-to-45 year olds in the United States. And it is about the number of desperate people promised a better life by the cartels and human traffickers who have died on their dangerous journey.

All the administration has said is "don't come," which is like telling a child not to raid the cookie jar. Secretary Mayorkas has repeatedly made the ludicrous claim that the border is closed. He should be impeached for lying and not enforcing the law, or maybe bring back the ancient whiplash form of punishment and apply it to high government officials (just kidding).