The age of wokeness 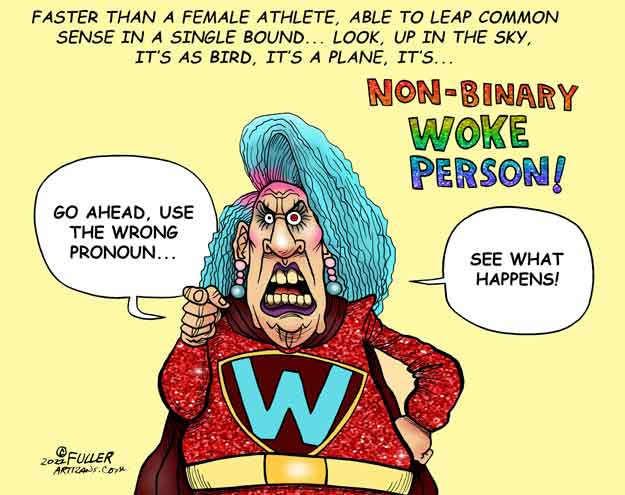 "And I'm proud to be an American…" (Lee Greenwood)

A Gallup poll has found only 38 percent of us are "strongly proud" to be Americans, the lowest on record. Another 22 percent say they are "moderately proud."

Some pro-choice liberals have called for boycotts of future Independence Days.

What is responsible for these numbers and attitudes about America? Part of it, I think, is the way much of the media cover stories, which are usually bad (and more importantly the good ones they ignore). They pit us against each other – rich against poor, black against white, Republicans against Democrats. They stress the fringe groups on both left and right and ignore moderate voices, rarely considering solutions to problems.

The City of Orlando issued a statement after sending out a promotion for its July 4 fireworks display, claiming people "probably" don't want to celebrate because America is full of "hate," adding, "we can't blame them."

Comedian Mel Brooks believes the best way to diminish the power of evil is to make fun of it. He did this in his film and later Broadway musical "The Producers." The show includes the song "Spring Time for Hitler" and a ludicrous Nazi sympathizer. Brooks would find it difficult to create that type of satire today because of what has come to be known as "wokeness."

Reinforcements have arrived with the publication of the Babylon Bee's "Guide to Wokeness." It is laugh out loud funny, unless you are woke.

The writers assert that wokeness is the new secular religion. They say being woke means: "realizing the problems in your life are not your fault; finding your identity not in objective reality, but in your feelings; worshipping the planet because humanity is evil; rejecting organized religion and mindlessly following the Left; finding racism, sexism and hatred in everything; changing your (social media) profile picture to match the current fad; brainwashing your kids to hate life and be miserable; rioting; never, ever being satisfied and having happiness, but instead constantly complaining about everything; becoming an absolutely horrible person to be around."

In addition to the media fixation on our divisions and corporations that shamelessly bow their knees to a tiny woke minority, the education system (which the Bee refers to as indoctrination) is responsible for promoting wokeness to the young.

The Bee writers take this on as follows: "Starting in pre-school your goal is to turn kids against their parents. Start by asking them simple questions, like 'Why are your parents so white and dumb'? Or 'Did you know your turtle sandbox is sitting on land your Dad stole from indigenous people?'"

Or this about sex, a subject once thought to the exclusive purview of parents: "Gender-Confuse them from kindergarten – it's important for your students to see sex as central to their identities and personalities." Such an approach, they write, turns a "well-adjusted boy" into an "enraged man ready to dismantle capitalism."

In all satire there are elements of truth, which is what makes it funny, at least to those not being skewered. In this case that would be the woke crowd and those who wish to be woke so they can be accepted by the spirits of the age. The Bee says to become fully woke requires constant apologizing for one's whiteness and even your humanity because you are a racist – don't deny it – and are guilty of destroying the planet by your very existence.

Get the book and after reading it and laughing yourself silly, give it to a liberal friend, take pictures of (use their preferred pronoun) facial expressions as they read it and post them on social media. Include a flag and "I love America" sticker to enhance their rage. And then run.