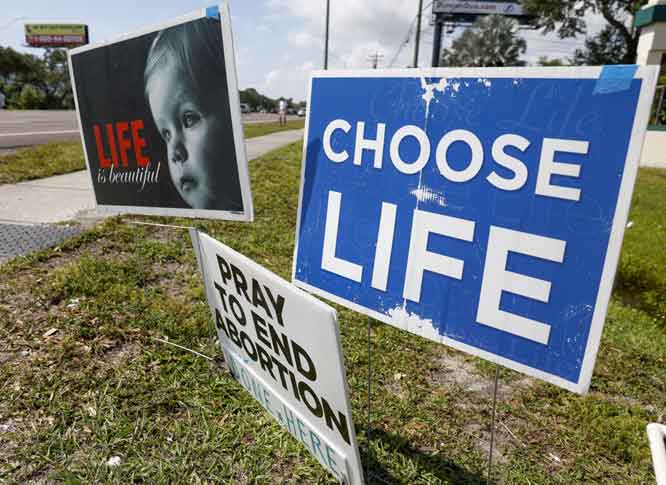 Tampa Bay Times
Some editorial writers, columnists and activists are working overtime to tell stories of women who oppose last week's ruling by the Supreme Court that overturned Roe v. Wade. Women will die, they say. What about the lives of their unborn children?

This attempt to divide humanity into categories of worth and less worth is reminiscent of the court's Dred Scott decision in 1857, which said Black slaves could not be citizens of the United States (suggesting they were less valuable than white people). The 7-2 decision was widely regarded as the worst decision in the court's history. Until Roe.

The word "choice" has been used by those opposed to any restrictions on abortion. If all choices are to be considered equal, then none is to be preferred. We don't apply that to any other category of life and law.

The 50-year debate – and the continuing debate going forward – is personal for me. My late daughter became pregnant before marriage and delivered a daughter. That daughter grew up, became a nurse, and now has two children of her own. One of her children was also conceived out of wedlock. He has grown into a handsome and intelligent young man.

Rather than my telling her story, I will let her tell it. Her name is Crystal and she posted this on her Facebook page after the court ruling:

"I was 19 when I found out I was pregnant with my first child.

I didn't have any future plans. Just taking 1 day at a time. The father of my child didn't want to be involved so it was just me. Never did I think abortion was my solution. I had people tell me my life would be ruined, I would not be able to provide for my unborn child, doctors encouraged me to get an abortion. People encouraged adoption. I wanted none of that! I became a mother. My instincts to love, protect and nurture my child were immediate. I didn't have a college degree or a well-paying job. I didn't have a bunch of money. I didn't even have a car!

"Having my child set me on a path and G od guided me the whole way. I am thankful to have the courage and the ability to think for myself to make my OWN decisions. I am thankful I was not easily swayed by the lies that abortion is and was the only solution. If you find yourself in a similar situation there is help! People say pro-lifers don't care about the child once the baby is born. That is a huge lie. There are SO MANY resources out there for young pregnant moms and people who choose life but need help to build a strong foundation.

"There are people who can't have children and WANT them. Adoption is a beautiful thing. Death for convenience and out of fear is not so beautiful. I know people who have shared their abortion stories with me and not one of them was because of a defect, rape, abuse. Every single one was because of fear. I want to share my story to counter the big lies told by the abortion industry. It's a business. They don't care about you or your baby. They want the money.

My firstborn is 16, he is smart, funny, responsible, dedicated and I'm so lucky I get to be his mom. I am where I am today in my life because I became a mother early on. I don't regret a second of it. I have achieved so much in my life, having a child didn't hold me back, it propelled me."

There is not much I can add. Generations will be born because these two women chose life in circumstances that were less than ideal.