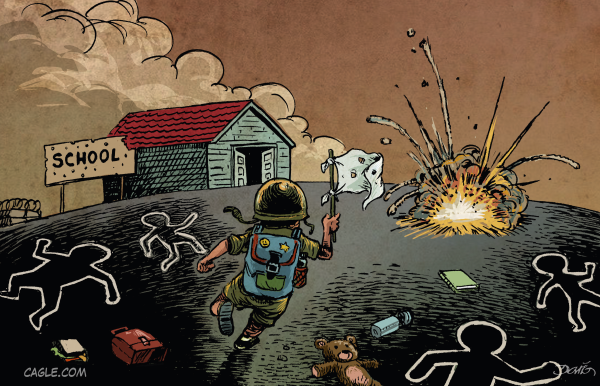 There are no adjectives that can accurately describe the gruesome act committed by 18-year-old Salvador Ramos at Robb Elementary School in Uvalde, Texas. He killed 19 children and two teachers. "Evil" is about as close as it gets.

President Biden and some fellow Democrats predictably called for more gun control laws without explaining why current laws are not obeyed by people intent on breaking them.

Texas state Sens. John Whitmire (D) and Roland Gutierrez (D) said Ramos had legally purchased one of the assault rifles from a federally licensed gun store on May 17, one day after he turned 18. The following day, reported the Houston Chronicle, he purchased 375 rounds of ammunition. Then, on May 20, he reportedly bought his second assault rifle.

At a news conference, Texas Governor Greg Abbott said Ramos posted on Facebook his intention to shoot his grandmother, posted again after he shot her, and then posted he was going to shoot-up an elementary school. Why did no one contact the police?

The most important question is could this tragedy have been prevented?

The initial narrative of a quick law enforcement response is now in question. The Associated Press reported police waited outside the school for at least 40 minutes and perhaps one hour while parents and onlookers urged them to do something. Authorities said Ramos lingered outside the school building firing shots for 12 minutes before going inside. That should have been enough time for the police to stop him.

Before the shooting, Ramos tagged a Los Angeles girl on Instagram, hinting at his intentions. The girl said she had never met him. Why didn't she contact authorities? News reports quoted her as "afraid," but after the shooting she regretted not doing so. Ramos had taken a picture of two AR-15-style weapons he purchased and posted it on social media. One can support the Second Amendment and still favor bans on weapons of war. There should, at a minimum, be a waiting period, a full background check, a mental evaluation and a look into instances of anti-social and erratic behavior and family structure.

The Uvalde school district's website says it has "proponents to curb and/or eliminate" elements of "violence, vandalism, disruptions and fear" in its schools to "provide a safe and secure environment for all."

Clearly that failed. At a news conference held Thursday, it was reported that Ramos was allowed to enter Robb Elementary without opposition, contradicting earlier reports that Uvalde police officers "engaged" the killer.

That sounds good, but investigators, parents and relatives will want to know which, if any of these, were not operative or malfunctioned?

Parents have a right to expect schools to protect their children from harm. It wasn't that long ago when parents could send their children off to school, expecting them to return safely. Schools, then, were considered as safe as one's home. Faculty and staff saw it as their duty to protect students from injury. Even running in the hallway could require a child to stay after school as punishment or meet with the principal.

Today, it appears only homeschooling can guarantee a safe environment for kids. While some people in Uvalde and elsewhere may select that option, most won't, or are unable to for various reasons.

Each time one of these evil acts occurs, we hear from politicians that we can't go on like this. OK, then tell us how to stop it. Laws alone have not succeeded. Again, examining prospective purchasers more closely might help, along with waiting periods and more rigorous background checks.

There is also a moral element to this and other school shootings which should not be overlooked. Preachers, please, take note.