The cost of the Russian war keeps rising 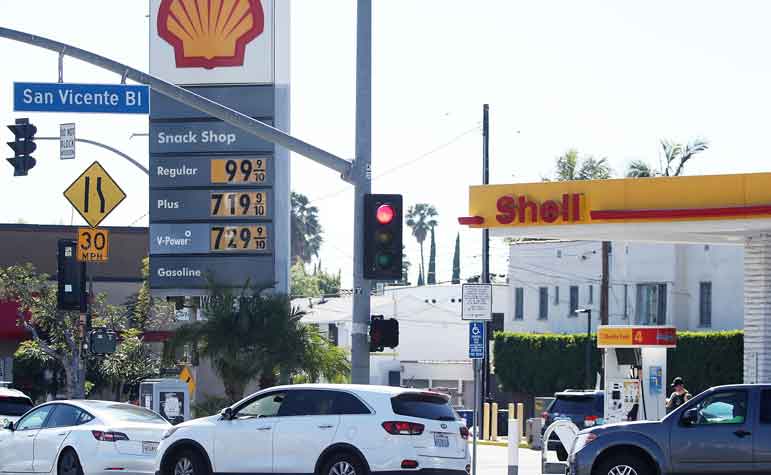 From the start of Russia's invasion of Ukraine, the U.S. stock market, which has been "stumbling since the beginning of the year," writes the New York Times, is down "10.3 percent from its most recent peak on Jan. 3," and the cost of gas is rising rapidly. Near record high oil prices — it briefly topped $130 per barrel on Monday — means in some states it costs $100 to fill up certain vehicles, more if you drive a truck for a living.

The stock market's decline is hurting retired people who rely on their 401k and IRA investments.

The Biden administration is engaging in mostly symbolic gestures and rhetoric, promising to bring down the price of gas, but without results. What's needed is obvious, including the restoration of the Keystone Pipeline and drilling for oil on federal land. During the previous administration, gas prices were more than $2 a gallon lower on average than today, though it was due largely to supply and demand during the pandemic â€“ more people working from home, fewer people buying gas.

While many environmentalists want to wean us from fossil fuels in favor of green energy, the problem for them â€“ and the rest of us â€“ is that fossil fuels are in virtually everything we buy and need. A Google search finds 144 products that contain petroleum. These include ink, upholstery, bicycle tires, dishwasher parts, food preservatives, petroleum jelly, antiseptics, shoes, trash bags and even fishing hooks. Windmills and solar panels won't create these products.

When it comes to the electric vehicles, here are some fun facts.

An electric vehicle (EV) battery, like all batteries, doesn't make electricity. It only stores it. The electricity must be produced primarily by coal, uranium, natural gas-powered plants, or diesel-fueled generators. The claim that EVs produce no emissions may be technically true, but there are emissions from substances that go into making them.

A typical EV battery weighs more than 1,000 pounds. It contains 25 pounds of lithium, 60 pounds of nickel, 44 pounds of manganese, 30 pounds of cobalt and 400 pounds of aluminum. Inside are over 6,000 individual lithium-ion cells.

Windmills, which along with EVs and solar panels, are not a viable alternative to fossil fuels. Not only can't they meet our energy needs, they also contribute to environmental destruction. Some windmills weigh more than 164 tons. Each blade lasts only 15 to 20 years at which time they must be replaced. There is also the harm caused by the spinning blades to birds, bats, sea life and migratory insects.

If fossil fuels are to be replaced, or our reliance on them reduced, technology must precede politics and wish lists. Otherwise — and without a change in policies that return us to what as recently as 2016 produced energy independence — prices will continue to rise.

Former Obama administration U.S. Treasury official Mark Mazur has revealed the goal of the greens. "We don't want lower prices for fossil fuel buyers, we prefer higher prices" to achieve "climate change goals." Americans are supposed to change our way of life based on a dubious claim about "climate change"? They told us something similar in the '70s when "experts" were certain a new ice age was coming.

Voters, who are paying more at the pump, are likely to make the politicians responsible for increased gas prices and inflation pay at the polls come November.