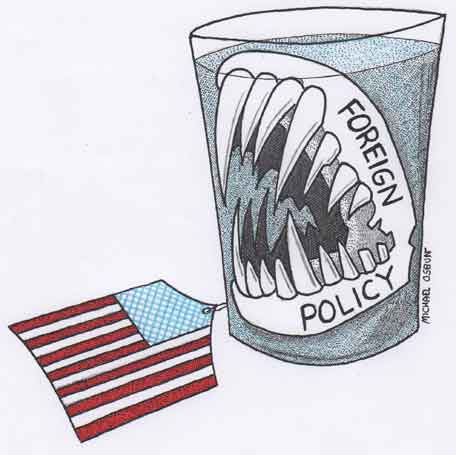 Oh, for the good old days of the Soviet Union. America's foreign policy and goals were clear then: containment and opposition to communist expansion. Nuclear weapons were a deterrent, but neither side believed the other would use them.

Russian President Vladimir Putin has changed the game by threatening to use nukes should the U.S. directly confront his forces now raping Ukraine and committing war crimes that the world is watching thanks to ubiquitous mobile phones, brave reporters and camera crews.

President Biden and top members of his administration say we can't directly intervene to stop Russia because of Putin's threat. Is that America's new foreign policy? If we can do little beyond sanctions against nations that have nuclear weapons this will signal to those who have them — and those planning to acquire them — that they have little to fear from America should they proceed with invading Taiwan (China) or attacking Israel (Iran).

Suppose Putin is emboldened by at least temporary success in Ukraine and proceeds to invade other countries that once were in the Soviet orbit, but are now sovereign states and in some cases members of NATO? Estonia and Latvia are two of them. Finland has a border with Russia that is more than 800 miles long. Article 5 of NATO's founding treaty says an attack on one member country will be considered an attack on all.

That treaty was written in 1949. Does it remain relevant today? Will someone in this administration please tell us how far we would be prepared to go to help NATO allies? Would the excuse that Russia has nuclear weapons be used to keep America from directly engaging Russian forces should they invade one or more NATO countries? It would be nice to know and soon.

The increasingly secular West has difficulty understanding evil, except in general terms. It is why what appears to be a pending nuclear deal between the U.S. and Iran is fraught with danger. If reports are accurate, Iran would be required to ship its uranium to another country. Would that country be Russia? And as part of the deal would the U.S. then buy Iranian oil in hopes of reducing gas prices ahead of the fall election? That would surely be a deal with the Devil and the ultimate in cynicism.

In 2016, the Obama administration bragged that a deal with Iran had ensured their nuclear program would remain "exclusively peaceful." If that were true, why are we in more negotiations designed to produce a similar agreement that will also very likely be ignored? Leaders of Iran have said they believe Allah wants them to develop nuclear weapons and they make no secret of their targets — Israel and the United States.

Evil can never be accommodated. It must be opposed, even defeated. That was Ronald Reagan's goal with the Soviet Union. Now Putin thinks he can reincarnate the USSR.

There is guidance in Scripture for those wishing to pay attention. It is found in both the Jewish and Christian bibles. Perhaps it is no more powerfully stated than in the Book of Deuteronomy. The instructions are to the ancient Israelites, but they apply today as evil is not exclusively tied to one generation or nation: "You must purge the evil from among you." (Deuteronomy 17:7)

One other thing. As a Wall Street Journal editorial noted, "Putin told us for years what'd he'd do. The West didn't listen."

Knowing something bad is coming and refusing to confront it ensures that when it does come we will have fewer options to defeat it.

This denial and "kicking the can down the road" also applies to domestic issues, including the necessary reform of Social Security and Medicare. Are we blind? Are we stupid? Do we have a foreign policy? If so, what is it?