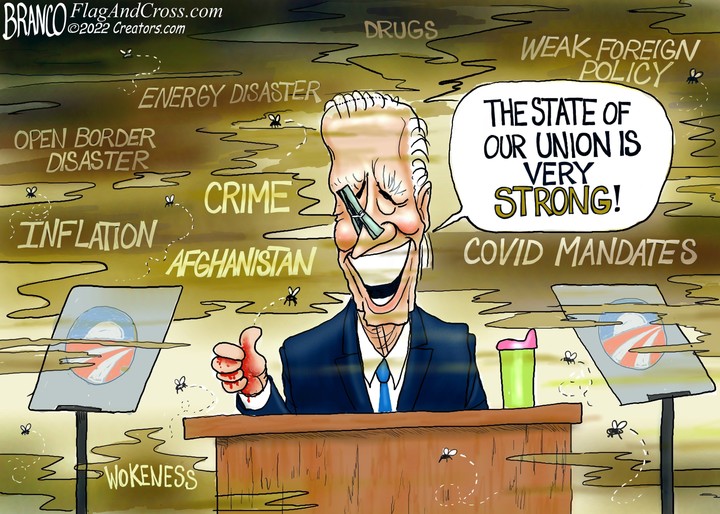 When a president's poll numbers are tanking, as the most recent Washington Post/ABC News poll shows they are for President Biden — 37 percent approval — he needed to do something spectacular, even radical, to keep him from sinking further. Unfortunately for Biden and his party, he did nothing that is likely to stem his free fall. Washington Post columnist Henry Olson said Biden's re-hashed agenda is "dead on arrival" in Congress.

The opening part of the State of the Union address about Ukraine seems to have been tacked on to a speech that had already been written. The words sounded good — freedom over tyranny was one good line — and the threat to go after Russian oligarchs may have appealed to that other war Democrats love to fight (that would be class warfare) — but words are not the kind of weapons Ukraine needs right now. Closing U.S. airspace to Russian flights is symbolic. Closing airspace over Ukraine would be substantive, though no one wants a confrontation with a nuclear-armed Russia and a Vladimir Putin who appears to some to be increasingly unstable.

The president said he had an agreement with allied countries to release 16 million barrels of oil. He claimed that would help drive down gas prices. He said nothing about the oil the U.S. buys from Russia, enabling it to underwrite the cost of tyranny against Ukraine.

The rest of the speech was pretty much boilerplate Democrat talking points we've heard for years, including the familiar charge that corporations and "the rich" aren't paying their "fair share in taxes." Why is it that Democrats never tell us what that means? The federal government takes in record amounts of revenue. It's spending that drives the debt. The president claimed he will cut the deficit (but not the debt) in half, but that is hard to believe in light of his new spending proposals.

Perhaps the most laughable part of the speech was his promise to "secure the border." Rather than finish building the wall, he wants to spend more on "technology" and give "citizenship to dreamers." How does that stem the tsunami of migrants who have been entering the country by the thousands? Rewarding people who broke the law to get here only encourages more to come. It also makes a mockery of immigration and other laws the president took an oath to enforce.

There was his claim that state governments are restricting "voting rights." In fact, some believe they are making it easier to vote, but harder to cheat, as the saying goes.

He blamed inflation and other economic problems on the pandemic, while seemingly taking credit for the decline in the number of COVID-19 cases and deaths.

The president also threw in a proposal to spend more on cancer research (something President Obama assigned him to do in what was termed a "moon shot"), "fund the police, not defund the police" and reduce the cost of prescription drugs, which we were told Obamacare was supposed to do. Why are these problems never solved? Answer: because they are not the business of government, though Democrats want us to believe so. If government could fix these problems, would they not have been fixed by now given all the rhetoric and spending?

These addresses would be much shorter if Members of Congress were required to remain seated. By my count, there were 58 standing ovations (most from Democrats).

The public might be better served and less bored if presidents adopted the pre-television-era policy of sending their thoughts on the state of the union to Congress in writing.

Unfortunately, that is as likely to happen as politicians balancing the budget.