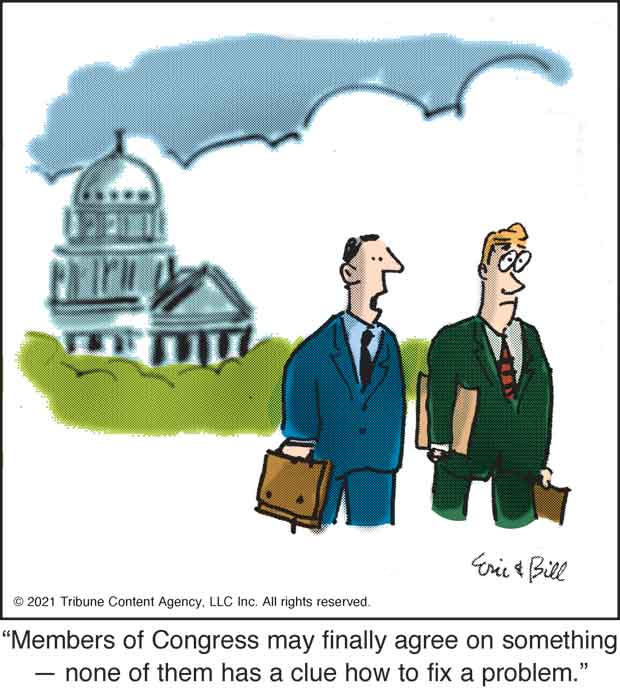 In certain circles — but not on cable networks or in fundraising letters — one continues to hear talk about bipartisanship and "reaching across the aisle." It sounds good and people who use the phrase probably feel better about themselves, but I wish to propose an alternative: win the argument.

America's Founders weren't interested in bipartisanship with the British. They fought a revolution to win. Nations don't engage in warfare just for the sake of achieving a draw. They want to be victorious.

The stated goal of Franklin Roosevelt was total victory over Germany and Japan in World War II. Some wanted to make a peace deal with Adolf Hitler, but Roosevelt would have none of it.

Ronald Reagan said he did not intend to co-exist with the Soviet Union, but to defeat it. Analyst Jeffrey W. Knopf argued that Reagan went beyond everyone else: "Reagan stands out in part because he believed the Soviet Union could be defeated. For most of the Cold War, Republican and Democratic administrations alike had assumed the Soviet Union would prove durable for the foreseeable future.

The bipartisan policy of containment aimed to keep the Soviet Union in check while trying to avoid nuclear war; it did not seek to force the dissolution of the Soviet empire. Ronald Reagan, in contrast, believed that the Soviet economy was so weak that increased pressure could bring (it) to the brink of failure. He therefore periodically expressed confidence that the forces of democracy â€˜will leave Marxism-Leninism on the ash heap of history.'"

Didn't America and the West "win" the Cold War? Remember how that felt?

Sports teams are not satisfied with ties. Las Vegas casinos don't refund part of a gambler's losses to be fair and equitable. Only in politics do we hear talk — and it is only talk — about working together. Consider President Biden's promise of bipartisanship which, like his promise to engage in civil discourse, he has not kept. Just two recent examples: his calling two Fox News reporters names and impugning their professionalism. Biden later called Fox White House Correspondent Peter Doocy to say it wasn't "personal". You can't get more personal than calling someone "a stupid son of a ..."

What if the policy goal was victory? That's the goal of Democrats when they win elections. Republicans don't seem to be able to handle victory so well when they win. Don't we know by now which policies work and which ones don't? Wasn't that the point of welfare reform in the 1990s. Bill Clinton and Newt Gingrich reached agreement on ending "welfare as we know it." People didn't starve, as some predicted. Most found jobs when they realized government checks would cease. It was a victory for everyone.

In Washington, problems are rarely solved and often get worse. If a problem is solved, politicians no longer have it as an issue to use against the other party. How cynical is that?

I have long thought an outside commission should be established to conduct a top-to-bottom audit of all federal programs, getting rid of those that don't achieve their stated goals and can't be done less expensively and more efficiently by the private sector. Who could oppose such a proposal, except those who benefit from division, chaos and spending other people's money? Such a commission would have no agenda other than promoting the general welfare.

If one is a liberal, it seems one doesn't need to achieve anything. Intentions are enough. Try that in business and see how long you last. If a sales strategy fails, you would be wise to try another strategy, or risk unemployment. Only with government do politicians rarely have to succeed and can still count on getting re-elected.

Winning the argument is better than never-ending arguments. We know what works and what is not working. Let's apply that knowledge and experience. It would get the country out of debt and shrink the overreach of government, contributing to more liberty, not less, as seems to be what we are currently experiencing.