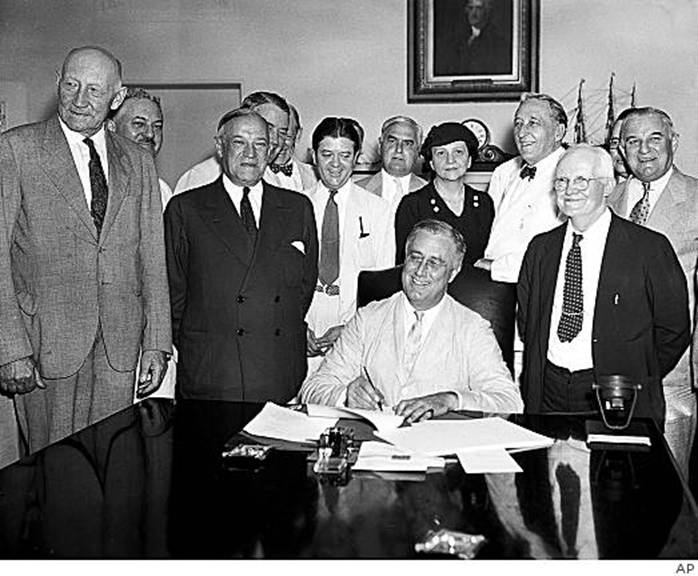 President Franklin Roosevelt signs the Social Security bill in Washington. Americans are getting older, but not this old: Social Security records show that 6.5 million people in the U.S. have reached the ripe old age of 112. In reality, only few could possibly be alive. But Social Security does not have death records for millions of people with birth dates stretching back as far as 1869, according to a report by the agency's inspector general. The first old-age monthly benefit check was paid in 1940.

One morning in early 1942, with the nation suddenly at war and not doing very well at it, President Franklin D. RoosÂ­evelt summoned Sen. Kenneth D. McKellar, a crusty old senator from Tennessee, to the White House. The president explained that he had to hide a billion dollars in the budget for a super-secret defense plant.

"Kenneth," FDR said, "you are the chairman of the Senate Appropriations Committee. Can you do that?"

"Well," the old senator said, in a slow, measured drawl, "of course I can. And where in Tennessee are we going to locate this facility?"

"Where" they located "this facilÂ­ity" was in a remote valley of the Clinch River, deep in Appalachia, largely unpopulated, 25 miles west of Knoxville. First the government built a town where there was nothÂ­ing and named it "Oak Ridge," a name chosen for the bucolic sound of it, hoping few would notice it. But within three years it grew to a population of 75,000, the fourth-largest city in the state (and kept off all maps), and it was here that the atomic bomb that was dropped on Hiroshima 71 years ago was built, ending the most destructive war since man began writing his history.

Hiroshima and the men who conceived the bomb, put it together and dropped it, is a story that has been told many times in books and movies and news accounts, but the story of the men and women - and mostly women - who manuÂ­factured the pieces has largely gone untold. Until now. Richard Cook, a Tennessean, has lovingly put together their story, told in the words of their oral histories, in a handsome book with dozens of photographs collected from official archives only recently available.

The town and the plant where the uranium was enriched was built with amazing speed. The scientists and engiÂ­neers were racing the Nazis, whom President Roosevelt knew were working on a weapon so terrible that the telling of it seemed the stuff of science fiction.

The first workers and laborers were recruited from crossroads villages from Tennessee and Kentucky and down into Alabama and Georgia and over to the Carolinas, mostly young women barely out of high school. Their men were mostly at war. They heard there was work "up near Knoxville" and packed meager belongings - the Depression was the wolf still at the door - into cheap cardboard suitcases, borrowed a few dollars from friends and family and "lit out for Tennessee."

In a region where nobody had a job, suddenly there were jobs. The workers were never told what they were making, but they were told that if they talked about their jobs to anyone they would be fired, arrested and or even sent to prison for a long time. They would be doing "war work." "ListenÂ­ing agents" were everywhere to make sure nobody talked. When a worker was fired nobody said anything about that, either. Coffins were opened to make sure nothing escaped the vast facilities.

Richard Cook thinks there are two reasons why the remarkable human story of Oak Ridge has not been previously told. One is benign and the other he calls "a national disgrace." The Manhattan Project was top secret and many of its secrets are still secured. Besides, it was a hard story to tell: many original sources are dead and gone, and documents are scarce. Workers were forbidden to keep notes. They couldn't have cameras.

"When I talk to groups about Oak Ridge," he says in his book, "Ignored Heroes of World War II," he recounts the fascinating particulars of love, life and work in the secret colony in the hills and hollows of the Tennessee mountains. "I delay telling them the purpose of the colony as long as possible. I want them to reserve judgment until they hear the word 'uranium.'" But as soon as he says the word he sees in their eyes that they don't want to hear anything more about Oak Ridge. "Their first question betrays the deep bias they cannot see: 'The bombings of Hiroshima and Nagasaki. Was it a good thing or a bad thing? I always answer 'yes'. It was both."

Or he might have said, a necessary thing. The bomb built at Oak Ridge ended the war and saved millions of Japanese and American lives, and after the bomb fell, just after the dawn of Aug. 6, 1945, the workers of Oak Ridge learned at last what they had made. The world would never be the same again. Thanks in large part to a lot of young women of Appalachia, sisters of Rosie the Riveter and Wendy the Welder, Americans are still speakÂ­ing English.