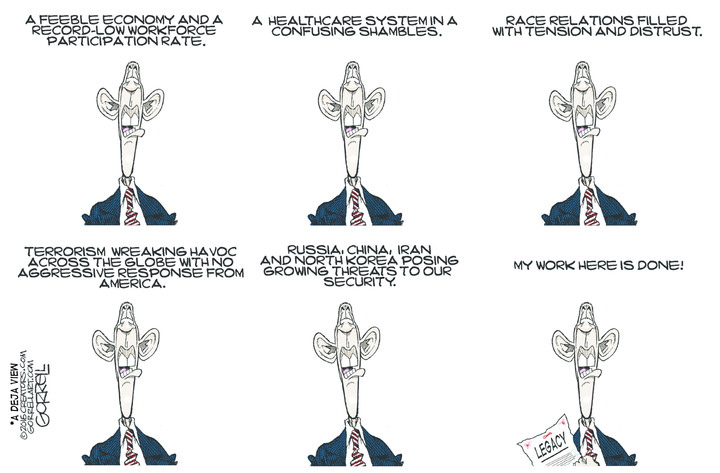 Barack Obama did not go out quietly. His unquiet final acts were, in part, overshadowed by a successor who refused to come in quietly and, in part, by Obama's own endless, sentimental farewell tour. But there was nothing nostalgic or sentimental about Obama's last acts. Two of them were simply shocking.

Perhaps we should have known. At the 2015 White House correspondents dinner, he joked about whether he had a bucket list: "Well, I have something that rhymes with bucket list."

Turns out, he wasn't kidding. Commuting the sentence of Chelsea Manning, one of the great traitors of our time, is finger-in-the-eye willfulness. Obama took 28 years off the sentence of a soldier who stole and then released through WikiLeaks almost half a million military reports plus another quarter-million State Department documents.

The cables were embarrassing; the military secrets were almost certainly deadly. They jeopardized the lives not just of American soldiers on two active fronts -- Iraq and Afghanistan -- but of locals who were, at great peril, secretly aiding and abetting us. After Manning's documents release, the Taliban "went on a killing spree" (according to intelligence sources quoted by Fox News) of those who fit the description of individuals working with the United States.

Moreover, we will be involved in many shadowy conflicts throughout the world. Locals will have to choose between us or our enemies. Would you choose a side that is so forgiving of a leaker who betrays her country -- and you?

Even the word "leaker" is misleading. Leak makes it sound like a piece of information a whistleblower gives Woodward and Bernstein to expose misdeeds in high office. This was nothing of the sort. It was the indiscriminate dumping of a mountain of national security secrets certain to bring harm to American troops, allies and interests.

Obama considered Manning's 35-year sentence excessive. On the contrary. It was lenient. Manning could have been -- and in previous ages, might well have been -- hanged for such treason. Now she walks after seven years.

What makes this commutation so spectacularly in-your-face is its hypocrisy. Here is a president who spent weeks banging the drums over the harm inflicted by WikiLeaks with its release of stolen materials and emails during the election campaign. He demanded a report immediately. He imposed sanctions on Russia. He preened about the sanctity of the American political process.

Over what? What exactly was released? A campaign chairman's private emails and Democratic National Committee chatter, i.e. campaign gossip, backbiting, indiscretions and cynicism. The usual stuff, embarrassing but not dangerous. No national security secrets, no classified material, no exposure of anyone to harm, just to ridicule and opprobrium.

The other last-minute Obama bombshell occurred four weeks earlier when, for the first time in nearly a half-century, the United States abandoned Israel on a crucial Security Council resolution, allowing the passage of a condemnation that will plague both Israel and its citizens for years to come. After eight years of reassurance, Obama seized the chance -- free of political accountability for himself and his potential Democratic successor -- to do permanent damage to Israel. (The U.S. has no power to reverse the Security Council resolution.)

Daniel Patrick Moynihan, the U.S. ambassador to the U.N. who went on to be a great Democratic senator, once argued passionately that in the anti-American, anti-democratic swamp of the U.N., America should act unwaveringly in opposition and never give in to the jackals. Obama joined the jackals.

Why? To curry favor with the international left? After all, Obama leaves office as a relatively young man of 55. His next chapter could very well be as a leader on the international stage, perhaps at the U.N. (secretary-general?) or some transnational (ostensibly) human rights organization. What better demonstration of bona fides than a gratuitous attack on Israel? Or the about-face on Manning and WikiLeaks? Or the freeing of a still unrepentant Puerto Rican terrorist, Oscar Lopez Rivera, also pulled off with three days remaining in his presidency.

A more likely explanation, however, is that these are acts not of calculation but of authenticity. This is Obama being Obama. He leaves office as he came in: a man of the left, but possessing the intelligence and discipline to suppress his more radical instincts. As of Nov. 9, 2016, suppression was no longer necessary.

We've just gotten a glimpse of his real self. From now on, we shall see much more of it.