The Unkindest Cut of All, Right in the Back of Israel 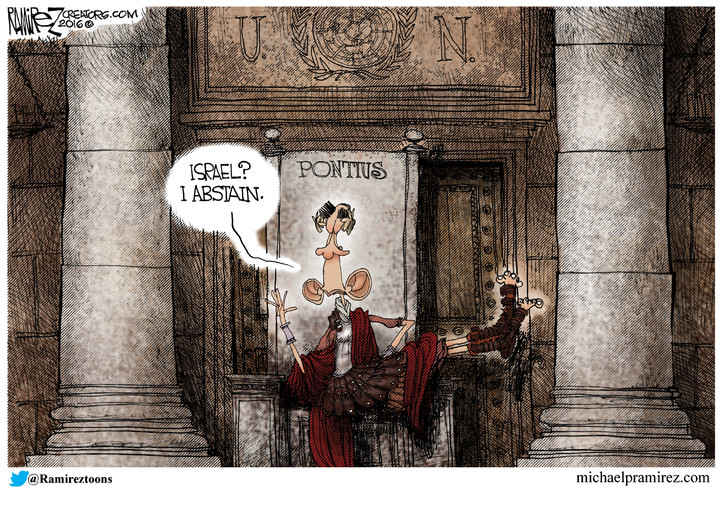 If Israel were a nation in human form, like Uncle Sam or Marianne, the feminine symbol of France, long bloody knives would be protruding from both back and breast.

The man with blood on his hands would be President Obama, who departed from decades of American policy under several presidents — both Republican and Democrat — and refused to veto a United Nations Security Council resolution rebuking Israel for land settlements, which the Jewish state hopes to use in a land swap to secure a lasting peace.

The president's action, or rather lack of action, is nothing less than treachery. The man presents himself as a great friend of Israel, but his long knives cut deep in a malevolent farewell gesture of contempt for the only democracy in the Middle East. Coming from the United States, Israel's most reliable friend for so long, this was the unkindest cut of all.

The reaction across America has been swift and angry — from left and right, liberal and conservative, Democrat and Republican. Liberal Democratic law professor Alan Dershowitz recalls in disbelief that soon after Obama's first inauguration, the president called him into the Oval Office to seek his support, promising that "he would always have Israel's back."

Dershowitz didn't get the president's real meaning at the time, he told "Fox & Friends," which was that "he would have their back so he could stab them in the back." Obama's fading administration tries to wrap itself in sheep's clothing, blaming the "absence of any meaningful peace process, as well as ... the face of accelerated settlement activity." But the text of the resolution goes far beyond the settlements.

The resolution would make the Western Wall (or the Wailing Wall, as it is commonly known), part of Israel's holiest site, illegally occupied under international law. Roads that act as pathways for both Israeli and Arab students to study at the Hebrew University and offer Israeli and Arab patients access to Hadassah Hospital would suddenly be rendered illegally occupied, too.

Israel opened its doors to Palestinians in answer to the Palestinians closing theirs to Israelis. For two decades before the Wailing Wall was liberated in the Six-Day War, Jews were denied access to the ancient stones once stained by their ancestors' prayers and tears.

John Bolton, former U.S. ambassador to the United Nations, agrees that "Barack Obama stabbed Israel in the front" by endorsing the Palestinian narrative and reducing possibilities for "land for peace." But all is not lost. President-elect Donald Trump now has ample opportunities to pivot away from his predecessor's perfidy. Bolton joins a chorus of politicians who suggest cutting U.S. assessed contributions to the United Nations, which amount to about $3 billion annually.

Alan Dershowitz and John Bolton visualize brutal stabbings in both the front and the back of Israel. Sen. Lindsey Graham of South Carolina describes the Obama treachery as abandoning "the only democracy in the Middle East who shares our values." House Speaker Paul Ryan calls the betrayal "absolutely shameful" and promises the clear focus of a unified Republican governing party to forge a new strong alliance with Israel.

If the Obama administration anticipated Republican fury, it seems surprised by the angry roars from the Democrats. Sen. Charles Schumer of New York, who will be the new leader of Senate Democrats, calls the failure to veto the resolution "frustrating, disappointing and confounding." Former Sen. George Mitchell, a Democrat who acted as special envoy to the Arab-Israeli peace process in the Obama administration, tells MSNBC News that the betrayal hurts the peace prospects for both Israel and the Palestinians. One Democrat, in the sharpest cut of all, says Obama is "worse than Jimmy Carter."

Anger becomes farce as critics suggest what to do with the valuable piece of real estate now occupied by the United Nations in the Turtle Bay neighborhood of New York City. One critic says the iconic building overlooking the East River could become another Trump hotel with great views of the skyscraper canyons. If diplomats would pay their parking and traffic tickets, that might sop up some of the red ink in the national budget.

Fun is fun, but change at the United Nations, which began with such idealism as a harbinger of world peace, offers little hope now for anything but more cynicism and more vitriol. As the President-elect might tweet, it's so sad.

Mixing absurdity with tragedy, Secretary of State John Kerry offered his grandiose rhetoric in a long speech that was heavily slanted against Israel. He obsessed over settlements and barely touched upon the root of the conflict: the "Palestinian opposition to a Jewish state in any boundaries," as Israel Prime Minister Benjamin Netanyahu observed. Leadership from this president's administration is, as usual, too little, too late — and headed in the wrong direction.