Trading Places in the Homestretch 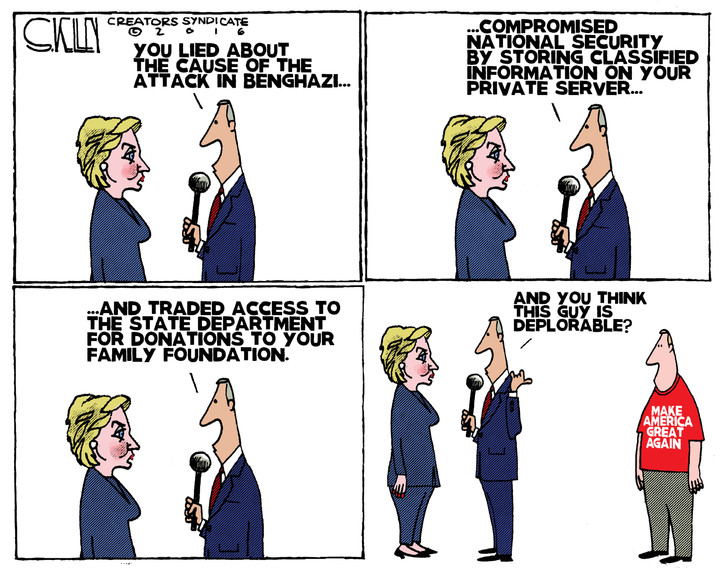 What an opportunity Hillary Clinton missed with her talk about "basket" cases. She blew a chance to broaden empathy for the unhappy, dissatisfied, disenchanted voters who find Donald Trump's message of strength — making America great again — important and crucial. She demeaned all those voters who are imperiled by the global economy, threatened by waves of illegal immigrants who compete for low-end jobs and angry with the politically correct elitists who undercut their values. By narrowing sympathy for them she expands her negatives.

The two candidates have traded places. Clinton demonstrates how she can stoop to insult as smoothly and as cruelly as her prime nemesis has done. The Donald, for once, stayed on message, eschewing ad-libbed black-and-blue language, and even looking presidential in his concern for Clinton's flailing health. No one would dare call this a pivot, but it's refreshing.

Not only did Clinton lump half of her basket cases together as irredeemable bigots, and the other half as helpless, hopeless, desperate, dependent victims. She shut down constructive conversation over what kind of leadership she would provide, for the millions who don't see the world through her royal blue glasses. Equally disquieting was the setting in which she chose to make her remarks — among the wealthy star-seekers at a fundraiser in New York, members of an elite society who enjoy their privileges blindly enough to be amused by her mean characterizations, as though she were performing in a skit on "Saturday Night Live."

Trump was right to call them out. He told the National Guard Association in Baltimore, Maryland: "She and her wealthy donors all had a good laugh. You heard them. They were all laughing. Good, good solid laugh. They were laughing at the very people who paved the roads — I mean, and these are the roads that she with all of her security drive on — paint the buildings she speaks in, and importantly, all of the other functions." She mocked the voter, not the candidate — always a dangerous tactic in a democracy.

Clinton's vulgar references brought out a rare eloquence in the Donald. He reminded his audience that his supporters come from every part of America, and every occupation, saying, "We have the support of cops and soldiers, carpenters and welders, the young and the old, and millions of working class families who just want a better future and a good job." It was not quite Walt Whitman, but it wasn't bad.

Clinton managed to half-apologize for generalizing so broadly as to include half of Trump's supporters, but her broad-brush namecalling smacks of guilt by association, and suggests that she did it intentionally to try to guilt-trip the independents who dare think of voting for Trump. She insists that they would be buying the bad brand.

Trump followers, however, are having the last laugh, wearing T-shirts with the slogan "adorable deplorables." And a poster parodying "Les Miserables" depicts a triumphant ragtag clutch of revolutionaries marching up the hill under two flags. One is the stars and stripes, the other is emblazoned with the name "Trump." The caption in bold letters identifies them as "Les Deplorables."

Clinton's remarks coincided with the hide-and-seek controversy over her health problems. In the Los Angeles Times tracking poll released this week, Trump now leads by nearly 6 points. This is still within the margin of error, and polls are mere snapshots in time, but it suggests the toll taken by Clinton's undisciplined mouth.

Her slurs against Trump supporters and working class men and women enabled him to draw emphasis toward an image of her as the rich insider who thinks she never has to show mercy to anyone. "While Hillary Clinton lives a sequestered life behind gates and walls and guards," he said, "she mocks and demeans hardworking Americans who only want their own families to enjoy a fraction of the security enjoyed by our politicians."

Then, with a bow to his emerging softer, sensitive side, he offered something to women, from whom he suffers a gap. During a speech in a Philadelphia suburb, he presented a child care policy for families, reflecting the strong influence of two strong women. Kellyanne Conway, his campaign manager, wants him to make child care a priority. And his daughter, Ivanka Trump, a mother of three who is passionate on the subject, helps him with details.

In an interview with Megyn Kelly of Fox News, Trump defended her father's harsh remarks about women in the past. She cast her defense with a feminist twist: "My father can be an equal opportunity offender. He will speak his mind, and he treats women equal to how he treats men. ...I think the fact that he doesn't treat us differently or with kid gloves shows the fact that he recognizes we're equipped to handle it." It's not clear whether that includes Hillary Clinton.