Give Marxist inspired authoritarians their due --- and day? 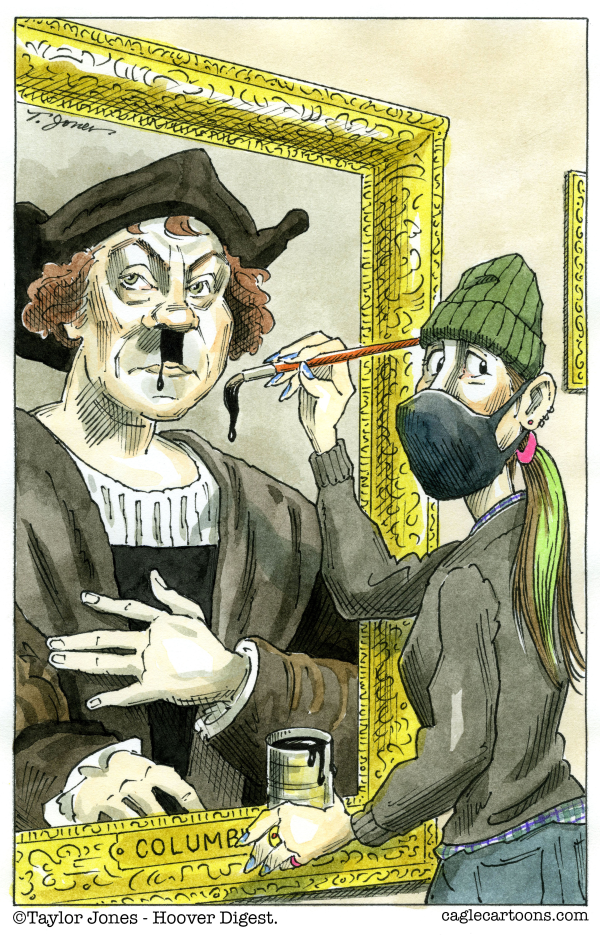 On September 27th the Conference of Presidents of Major Italian American Organizations came out with a full-page newspaper ad in support of celebrating Columbus Day. The idea of the print ad was to set the record straight and rectify current misconceptions about Christopher Columbus, what he did, what he didn't do, and who he was.

Our country is being run and ruined by America-hating deep-state elites made up of the Democrat Party and governmental bureaucrats, enabled and supported by the mainstream media, big tech companies, unions, public schools, and big business. They label themselves "progressives" but in fact are Marxist inspired authoritarians intent on dismantling everything our country has stood for since its inception, beginning, of course, with Columbus.

We've seen the tearing down and desecration of Columbus statues and monuments, but Columbus hatred emanates from our public schools, which have been teaching lies and distortions about Columbus to students since the 1960's. That's how long the "progressive" revisionist history of our country's founding has been going on.

As the newspaper ad stated "Prevailing narratives have turned one side into victims, and the other side into villains. Would you be surprised to learn that thousands of enslaved Africans were owned by Native Americans, or that Columbus — who never owned a slave and "adopted a Taino boy" as his son — became an American icon starting in 1892 after 11 Italians were murdered in New Orleans?"

The fact that Columbo never owned a slave, didn't start the slave trade, and never ordered the mass killing of indigenous people are what the America-haters never want you to know.

According to Know Columbus.Org: Columbus actually prohibited his men from harming the native population and executed two of his men who did. War, slavery, cannibalism, and sexual immorality were all common practices among some native tribes. As the Spanish would later find out, human sacrifice and infanticide were the norm among tribes such as the Aztecs. The Aztecs slaughtered upwards of 20,000 in a single year, sacrificing many of their enemies by removing their still-beating hearts.

Human sacrifices were common practice among Mexican tribes, which are commonly lumped in with the tribes Columbus encountered at the time of the arrival of the European explorers. Explorer Hernâ€ˇn Cortes even wrote that these tribes had slaves of their own and that they commonly practiced human sacrifice.

A few other tidbits of truth. Columbus never brought black slaves to the New World. Portugal was the first European nation to engage in the African Atlantic slave trade. In 1526 — 34 years after Columbus' arrival-- the Portuguese completed the first transatlantic slave voyage to Brazil.

Historic revisionists label plagues, such as contagious diseases, as "genocide." They argue that "European" diseases nearly killed entire tribes; however, there is only one disease that they are talking about: smallpox. Smallpox may have occurred among the inhabitants of Egypt more than 3,000 years ago, which predates any other reliable reference to the disease elsewhere in the ancient world by more than 1,000 years.

KnowColumbus.org goes on to say that it is pure speculation to say that smallpox, or other diseases, were introduced to the New World by Europeans. When sickness happens, it happens. Plagues did kill large populations of indigenous people, but they also did the same throughout the entire world, in every culture, over the course of history.

Two very good books on the facts of Columbus are "Christopher Columbus the Hero," and "Columbus Day vs Indigenous People's Day" both written by Rafael. In the second book he writes, "Anti-Columbus Day activists are using Christopher Columbus as an excuse to demonize American history in general, trusting that most people know little or nothing about Columbus."

He goes on to make the point that renaming Columbus Day Indigenous People's Day is an absurdity when you consider all the atrocities Native Americans committed against each other (human sacrifice, slavery, and cannibalism, as well as others) before and after Europeans arrived.

Naturally no amount of historical fact will sway the haters. You can't reason with committed fanatics. The only hope is in the schools. We must, somehow, return accuracy and truth to textbooks. We must bring in teachers who are unbiased, reasonable, and yes, patriotic into the classrooms. The future of our country depends on what our children are taught. This Columbus Day would be a good opportunity to sit down with your child or grandchild and tell him and her the truth about Christopher Columbus.

At least it's a start and it might make a difference.