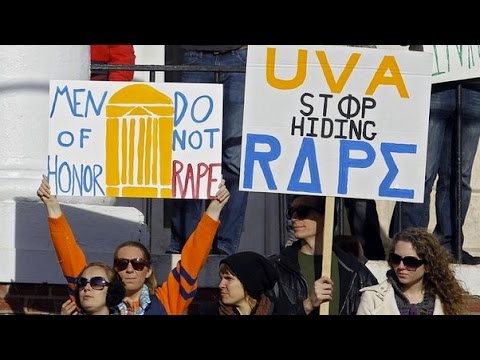 Rolling Stone magazine has now apologized, sort of, for publishing a lurid account of a gang rape at a fraternity at the University of Virginia that — it has become increasingly clear — never happened. But the larger story is why so many people — editors, readers and university officials — bought the story in the first place.

Within three days of publication of the fantastical account, which read more like third-rate pulp fiction than investigative journalism, the university president had suspended all Greek activities on campus. As with the Red Queen from "Alice's Adventures in Wonderland," it was "sentence first — verdict afterwards."

UVA President Teresa Sullivan's statement may have struck some as reasonable: "The wrongs described in Rolling Stone are appalling and have caused all of us to reexamine our responsibility to this community." She might as well have shouted "Off with their heads!" regarding the unnamed members of Phi Kappa Psi accused of the crime.

The motives of everyone involved in this story are suspect. It is hard to know whether the alleged victim, identified in the story and subsequently as Jackie, deserves pity or investigation for slander. Although her friends and roommates claim that "something" happened to change the woman's personality during her first semester at UVA, it is hard to know whether she was mentally ill or had, indeed, experienced some sexual or other trauma. Whatever happened to her, she chose not to go to the police — a wise choice, given the obvious inconsistencies and downright fabrications in the story she told Rolling Stone.

But Jackie's actions were only the beginning of the travesty. Why did Rolling Stone's editors accept a story that had not been thoroughly vetted, especially one that described horrific criminal activity? Why did the author of the story, Sabrina Rubin Erdely, accept her source's account without, at a minimum, seeking corroboration from others the source claimed she had told about the incident contemporaneously? Why would so many people believe that seven young men with high academic achievement and promise readily engaged in behavior that was brutal, disgusting and criminal — behavior that could put them behind bars and destroy their futures?

Why? The gullible bought the story because it reinforced their worldview: that elite universities are bastions of patriarchy and white privilege; that fraternities exist to promote drunkenness, lechery and exclusion; and, most of all, that "rape culture" pervades campus life.

Even President Barack Obama has pushed the narrative about campus rape culture. Two months before the Rolling Stone article made it into print, the president held a White House event that decried campus sexual assault. The president repeated the oft-quoted statistic that "an estimated 1 in 5 women has been sexually assaulted during her college years — 1 in 5. Of those assaults, only 12 percent are reported, and of those reported assaults, only a fraction of the offenders are punished."

But those figures are bogus. A new study released by the Department of Justice this week shows that women on college campuses are far less likely to be victims of sexual assault than their peers. The actual rate of sexual assault is a fraction of the president's figures: 6.1 assaults per 1,000 female college students, or 0.61 percent, not 20 percent.

None of this is to say that young women don't face a sexually confusing, sometimes dangerous environment on college campuses today. Campuses are hyper-sexualized. Orientation at many schools involves promoting guilt-free "safe-sex" exploration and experimentation. Sure, these indoctrination sessions include messages that "no means no," but the underlying ethic is one that promotes promiscuity and no-commitment sex.

But the answer to this hyper-sexuality isn't to invent a narrative that turns all male students into potential or actual rapists and all women into victims. By pushing the rape culture narrative, activists, irresponsible journalists and university administrators may actually undermine the credibility of genuine victims. Rape is a violent crime — not a political metaphor to be used to promote an anti-male, anti-elitist agenda.