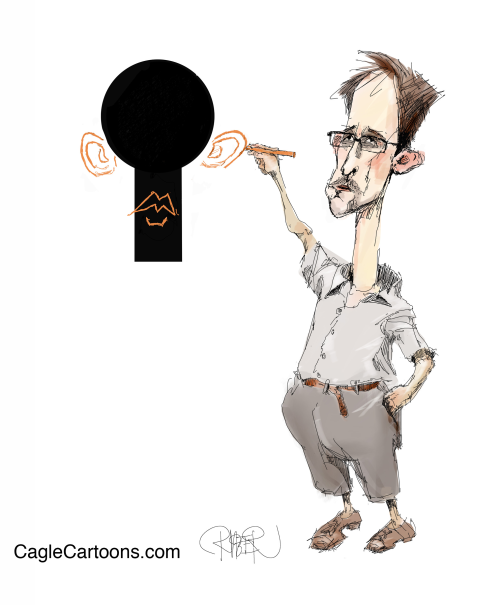 I know, it's embarrassing — Assange, Manning, Snowden... Who did what?

I got them confused before I researched this topic. National security isn't my beat. I finally educated myself this month because I got a chance to interview Snowden, the CIA/NSA employee who told the world that our government spied on us but lied to Congress about it.

We talked via Zoom.

Fourteen years ago, when Snowden worked for the CIA, and then the NSA, he signed agreements saying he would not talk about what he did. I confronted him about breaking his promise.

"What changed me," he answers, "was the realization that what our government actually does was very different than the public representation of it."

The NSA's mass surveillance program was meant to find foreign terrorists. When congressmen asked NSA officials if, without warrants, they collected data on Americans, they lied and said, "No."

"There was a breathtaking sweep of intentional knowing public deception," says Snowden. "We're capturing everything that your family is doing online."

I asked Snowden if his co-workers had qualms.

"In private, some said, 'This is crazy. I'm not sure this is legal, but you know what happens to people who talk about this.'"

Nothing terrible, said President Barack Obama, who claimed Snowden could have revealed the government's lawbreaking legally. "There were other avenues available," he told reporters.

"What he said was incorrect," Snowden tells me.

Government officials protect themselves by discrediting those who reveal inconvenient truths. Previous whistleblowers lost their jobs. Some were shocked to be subjects of dawn raids by federal police with guns drawn.

Instead, he took documents to journalists. The world learned the truth.

American officials said Snowden's leaks put lives at risk. But in the eight years since then, they've never given any clear examples.

"They constantly tell us, 'This is for your safety (and) to investigate terrorists,'" says Snowden. "Barack Obama's own investigations found that it didn't stop a single terrorist attack."

At the time, the NSA did claim that mass surveillance stopped terrorism.

"That makes me feel safer when I hear that," I say to Snowden.

"We want to believe it's true," Snowden responds, "but it's not. The government itself no longer makes these claims that it stopped 54 plots."

In fact, the government no longer claims it stopped any attacks.

All of this made me realize — Snowden got screwed.

"Aren't you pissed off?" I ask. "(Former Director of National Intelligence) James Clapper lied to Congress and he wasn't fired! Now he works for CNN. (Former NSA director) Keith Alexander wasn't fired. Now he's on Amazon's board! They made out; you're in exile."

"If you're one of these 'made men,'" answers Snowden, "You face a very different flavor of justice."

Snowden went to Hong Kong to give reporters the data that showed the NSA had lied. He asked 27 countries to grant him asylum, without success. He tried to fly to Ecuador. When his plane stopped for a layover in Moscow, U.S. officials revoked his passport. He's been stuck in Moscow for seven years now.


If he returns to America, then Snowden will almost certainly be jailed.

"I can be very much at peace with the choices that I've made," he says. It was the right thing to do, and it has made things better. Some of these programs have been halted."

In 2013, Donald Trump was asked about Snowden. He said, "This guy is a bad guy and there is still a thing called execution!" But this year, President Trump said he'd "look at" giving Snowden a pardon.

"I think it's clearer and clearer that what I did was the right thing to do," Snowden tells me. "History has a way of exonerating the truth."

Snowden did a good thing. He deserves a pardon.

Julian Assange deserves one, too.