Can Loeffler and Perdue prevail in the fraud-plagued Peach State? 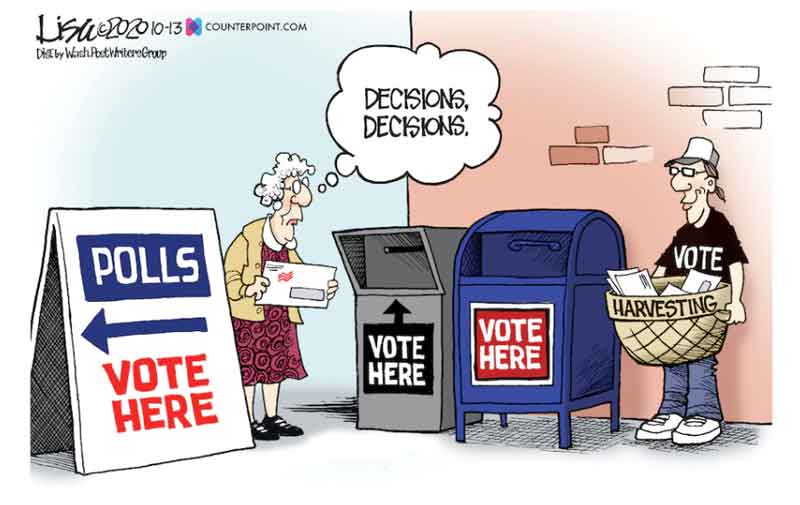 If Loeffler and Perdue prevail, they will be two more votes for President Donald J. Trump's America First agenda, should his litigation secure him a second term. If Joe Biden becomes president, they will become emergency brakes against the stalwart-liberal Delawarean and his hard-Left team as they speed America ever-closer to the cliff's edge.

If Loeffler and Perdue lose, however, and Biden is inaugurated, radical Raphael Warnock and boy-socialist Jon Ossoff will elect Senator Chuck Schumer (D - New York) majority leader. Biden, Schumer, and House Speaker Nancy Pelosi — the three horsepersons of the apocalypse — will unleash a parade of far-Left plagues that will balloon the federal government, persecute Republicans, and install a long-term, Democrat, one-party state, yielding:

• A packed, Left-wing Supreme Court to bless this mess.

Georgia's Republicans, independents, and thinking Democrats must stop this socialist Armageddon. But can they?

The November election's shenanigans and illegalities should terrify every American.

Secretary of State Brad Raffensperger (R â€“ Georgia) is probing 250 cases of possible vote fraud. Affidavits confirm suspicious-to-criminal behavior before, during, and after Election Day. If this corruption stays uncleansed, Loeffler and Perdue could be doomed.

As Jordan Davidson chronicled in The Federalist, a lawsuit filed by President Trump and the Georgia GOP detailed "fraud sufficient in scale to place the election result in doubt," as state Republican chairman David Shafer said, at the litigation's launch. This crookedness includes:

• 217 voters whose absentee ballots were "applied for, issued, and received all on the same day."

• 1,043 people who claimed to reside inside Post Office boxes

• 305,701 voters who requested absentee ballots after the deadline

Brian Kemp has been listless throughout all of this. His attitude seems to be, "Who am I to get involved?" That answer is easy: Brian Kemp is Georgia's Republican Governor. As such, he can and should summon the Republican-controlled state legislature immediately into special session to disinfect Georgia's elections:

a) New voters must register at least three weeks before Election Day, so officials can confirm their eligibility.

b) Voter rolls must be continuously purged of ineligible, relocated, and deceased voters.

c) Absentee ballots should be available by request, only among those too frail or far to vote in person on Election Day.

d) Mass-mail-in ballots must be verboten.

e) Ballot harvesting must be kaput.

f) Unsupervised, vulnerable ballot-drop boxes should be banned, pried from sidewalks, and melted into steel ingots.


h) Every citizen must present a government-issued photo ID card to vote (or a copy, with each absentee ballot). Anyone who needs one will get one, free.

i) All ballots must be received before polls close on Election Day. Period.

j) Require that Democrat and GOP observers verify that signatures on absentee and mail-in ballots match those on file. Currently, a sole observer can authorize ballots.

k) Party challengers and journalists may observe everything — from precinct opening to ballot tabulation — with neither interference nor intimidation.

GOP lawmakers should send Kemp such a clean-election bill for his prompt signature. Georgians then could vote with far greater confidence that their choices will not be neutralized by bogus ballots. Right now, Peach State Trump supporters have at least 386,570 reasons to think otherwise. Heaven help us all if Loeffler and Perdue voters get that same sinking feeling come January 6 or 7.