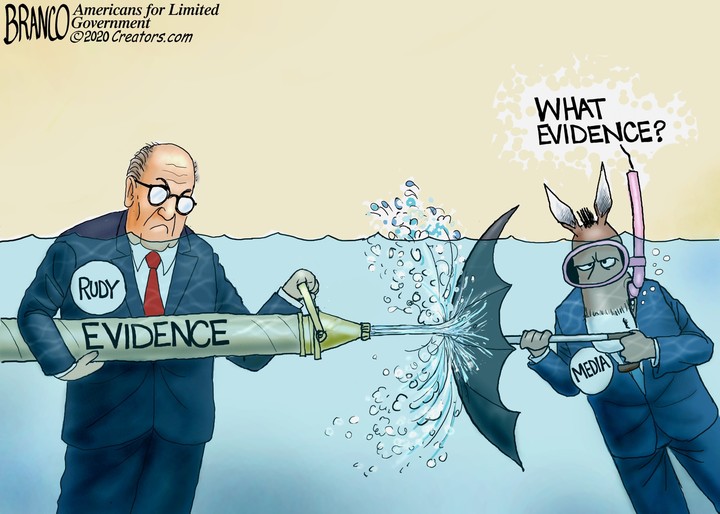 Despite the naysayers' insistence, there IS evidence of vote fraud, irregularities, statistical anomalies, and other things that simply are not right about last month's election. Pretending that fraud does not exist and calling complaints of election malfeasance "baseless" and "unsubstantiated" is pure denial of the most societally corrosive kind.

A small sample of recent revelations confirms the abundant evidence of highly suspicious, if not deeply criminal activity. These matters demand investigation, not dismissal:

• aUnder penalty of perjury, Jesse Morgan, a subcontracted U.S. Postal Service truck driver, swore in an affidavit that he drove between 130,000 to 280,000 pre-filled ballots in 24 bulk-mail bins from Bethpage, New York, across state lines, to Harrisburg, Pennsylvania, on October 21. After waiting nearly six hours for someone to process this cargo, Morgan was given none of the usual paperwork. Instead, in an unprecedented step, a self-styled "transportation supervisor" ordered Morgan to drive that shipment to Lancaster, Pennsylvania. Morgan dropped off his rig, whereupon, it vanished.

Morgan is no ax-grinding partisan. In his Fox News appearances and press conference with the Thomas More Society's Amistad Project, a public-interest law firm, Morgan admitted that he did not vote last month.

Aside from a college student here or there voting absentee, why was anyone in New York shipping hundreds of thousands of filled ballots into Pennsylvania? If there is an innocent explanation to this scenario, let's hear it — pronto.

• Amistad also presented USPS subcontractor Nathan Pease. According to his sworn and signed affidavit, he overheard two postal co-workers on two occasions say that USPS employees would gather some 100,000 absentee ballots in Wisconsin on November 4 and backdate their postmarks to November 3. This would "harmonize" these ballots with the Election Day deadline and make them "valid" for tabulation.

• Georgia's secretary of state is probing some 250 irregularities across the Peach State. He should investigate the voting machines dumped by the side of a road near the Blueberry Hill Bar and Grill in Savannah. These devices reportedly are outdated. But who throws voting machines into the grass beside highways? At least one voting instrument was registered in Fulton County, home of Atlanta, 248 miles away.

• Georgia officials also should follow former FBI agent Derek Somerville's clues: He discovered 57,793 voters who cast ballots in locations beyond the counties where they had instructed the Postal Service to forward their mail. These included 17,514 who asked for their mail to be sent out of state to non-military address. Somerville found that 80 percent of these people were over age 25 and, thus, not likely in college. Who were these folks, and why did 43,507 (75 percent) of them vote by mail, unseen by poll workers?

• Vote Integrity examined 8,954 "vote dumps" as ballots were counted on November 4. Four of these especially earned that inelegant but accurate description. These large vote deposits of were reported in the wee small hours, often as GOP poll watchers complained of being hindered in their duties.


"We find that the extents of the respective anomalies here are more than the margin of victory in all three states — Michigan, Wisconsin, and Georgia — which collectively represent forty-two electoral votes," the authors concluded. "It is our belief that the extraordinarily anomalous nature of the studied vote updates here, combined with the staggering political implications, demands immediate and thorough investigation."

Does Lindsay Graham's Senate Judiciary Committee have anything more urgent than this to address immediately?