The party of never-ending hypocrisy 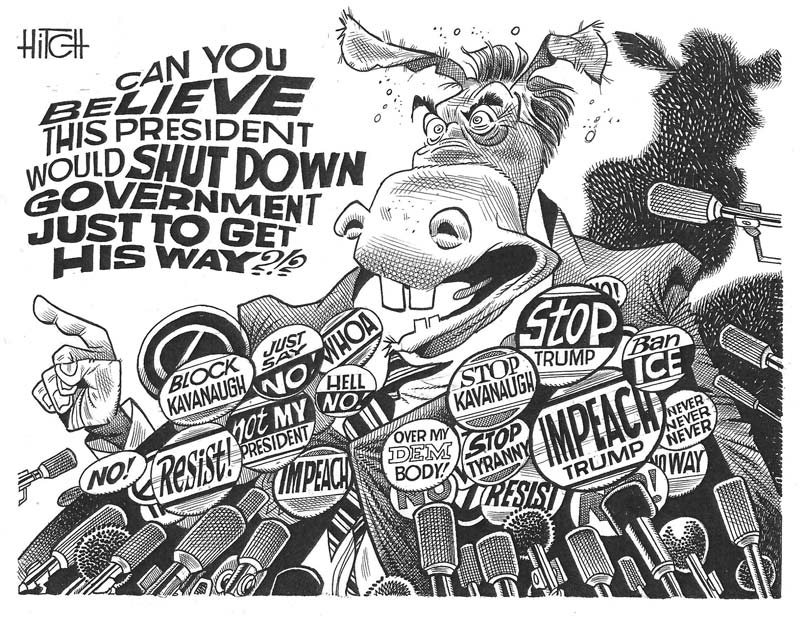 Call it the Great Hypocrisy.

Democratic politicians, forgetting something referred to as the Mueller investigation, are accusing President Donald Trump of politically motivated mayhem for lawsuits about possible fraud in the presidential election. They say important matters are being delayed, that our system of presidential transitions is being squashed, that democracy is being spat upon and that institutional distrust is being fostered.

They also say there is nothing to be found that would alter the election outcome, and that is likely true. But Trump is still within the law and may be doing good in digging into the predicted, denied but actual mail-in ballot confusion.

The lawsuits might help instruct us on how to deter future risks, such as by keeping the practice far more limited and procedures far more transparent and precise. And even assuming the worst, this is nothing compared to the Russia collusion probe headed by Robert Mueller.

Instead of a short hold on things, we had a two-year, multimillion-dollar shock-and-awe onslaught based on a collaboration of corrupt officialdom setting principles aside to come up with nothing. Here is an obvious contender for the worst ever governmental scandal, abetted to no small extent by misleading news accounts and lying Democrats.

The purpose was the impeachment of a legitimately elected president, and, yes, he could make you shudder, coming across as multidimensionally askew: a clown act, a demagogue, petty, occasionally mindless, uninformed and inexperienced. Some bureaucrats looked at that and were scared. They figured the government was pretty much theirs, forgot their oaths of office and were determined on White House eviction.

It is true that the Mueller investigation did put some Trump associates in prison for crimes having little if anything to do with the allegation, but, at the end, Mueller said he could not demonstrate campaign criminality, such as assisting Russians in their hacking of Democratic emails. He also said he would not exonerate Trump, as if that were ever the role of a prosecutor.

We now know there was official lying before Congress and other unlawful conduct and that the Clinton campaign financed a deal with a former British spy who came up with phony dirt on Trump. It seems to have played a major role in the initial FBI probe.

What accounts for Trump's fawning over Russia President Vladimir Putin? That's anybody's guess, but not something you would see from a Russian agent trying to keep the fact hidden. Trump was indeed many times tougher on Russia than Obama, and the miracle is that, while having to climb over investigation hindrances, Trump accomplished quite a bit.

The outrage was that we were treated to catastrophic malfeasance, and the insight is that there is something far worse than Trump out there that proves itself daily

An instance of that was Democratic House Speaker Nancy Pelosi urgently giving us a careless, devious House impeachment hearing. Again, there was no crime, just assumptions about what Trump may have intended in a phone call revealed by an unidentified whistleblower relying on secondhand information.

Pelosi was smart enough to tell Republicans they could call no witnesses but confused enough to try to put pressure on Senate Republicans to find him guilty by sitting for weeks on needed impeachment papers needed for a concluding trial.

The impeachment proceedings did underline a stark Joe Biden conflict of interest as vice president, something actually more intriguing than the Trump phone call, but more importantly the proceedings caused a delay in focusing on and addressing a virus just making its appearance.

In addition to all of this, we also know about all the illegal leaks of classified information and that we have an ongoing criminal investigation under the Justice Department that could lead to criminal prosecutions of certain precious ones involved in some of the shenanigans.

Unless charges are made soon, Biden's attorney general will likely erase that pursuit of justice.