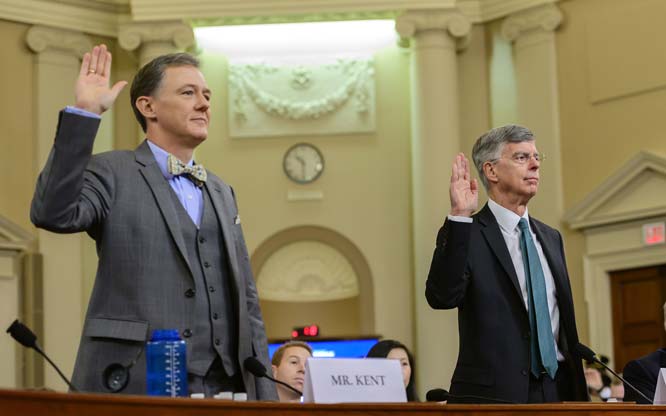 For most of the last three years, critics have scoffed at supposed "conspiracy theories" that claimed a "deep state" of bureaucrats were aborting the Trump presidency. We have been told the word "coup" is hyperbole that reveals the paranoid minds of Trump supporters.

Yet oddly, many people brag that they are proud members of a deep state and occasionally boast about the idea of a coup.

Far from denying the danger of an unelected careerist bureaucracy that seeks to overturn presidential policies, columnists have praised its efforts to nullify the Trump agenda.

On the first day of the impeachment inquiry, Chairman called his initial two witnesses, career diplomats . and . Far from providing damning evidence of criminal presidential behavior, Taylor and Kent mostly confined themselves to three topics: their own sterling rĂ©sumĂ©s, their lack of any firsthand knowledge of incriminating Trump action, and their poorly hidden disgust with the manner and substance of Trump's foreign policy.

Oddly, both had little clue that their demeanor and thinly disguised self-importance were a perfect example of why Trump got elected -- to come up with new ideas antithetical to the conventional wisdom of unelected career bureaucrats.

Taylor and Kent announced that they are simply high-minded civil servants who serve the presidential administrations of both parties without bias.

But by nature, the huge federal bureaucracy counts on bigger government and more taxes to feed it. So naturally, the bureaucracy is usually more sympathetic to big-government progressives than to small-government conservatives.

Taylor and Kent cited their anguish with Trump's foreign policy toward -- namely that it did not go through official channels and was too unsympathetic to and too friendly to . If so, one might have thought the anguished bureaucrats would have similarly gone public during the Obama administration.

After all, Vice President took over the Obama administration's Ukrainian policy at a time when his son Hunter was knee-deep in Ukrainian affairs. As a consultant for a Ukrainian natural gas company, made a reported $80,000 a month without expertise in either the energy business in particular or in general.

Also, Trump's policies have been more anti-Russian and pro-Ukrainian than those of the Obama administration. Trump armed the Ukrainians; Obama did not. Trump imposed new sanctions against , used force against Russian mercenaries in , beefed up defenses, pulled the out an asymmetrical missile treaty with , and pumped more oil and gas to lower world prices -- much to the chagrin of oil-exporting .

In contrast, Obama was the architect of "reset" with that reached its nadir in a hot mic exchange in which Obama offered a quid pro quo, vowing more flexibility on issues such as -sponsored missile defense in in exchange for giving Obama "space" to concentrate on his re-election.

Trump's critics have also radically changed their spin on "coups." To them, "coup" is no longer a dirty word trafficked in by right-wing conspiracists. Instead, it has been normalized as a possibly legitimate means of aborting the Trump presidency.

, the attorney representing the whistleblower, boasted in two recently discovered tweets of ongoing efforts to stage a coup to remove Trump.

Retired Admiral recently wrote an op-ed for The New York Times all but calling for Trump's ouster -- "the sooner the better."

No sooner had Trump been elected than , a former Defense Department official during the Obama administration, wrote an essay for discussing theoretical ways to remove Trump before the 2020 election, among them a scenario involving a military coup.

In , published an op-ed from an anonymous official who boasted of supposedly widescale efforts inside the Trump administration to nullify its operations and subvert presidential directives.

Such efforts to oppose Trump are often self-described as "The Resistance," a reference to the underground French fighters resisting the Nazis in World War II.

Trump's opponents often have praised the deep state precisely because unelected career officials are seen as the most effective way to sabotage and stymie his agenda.

A "coup" is no longer proof of right-wing paranoia, but increasingly a part of the general progressive discourse of resistance to Trump.

In these upside-down times, patriotism is being redefined as removing a president before a constitutionally mandated election.