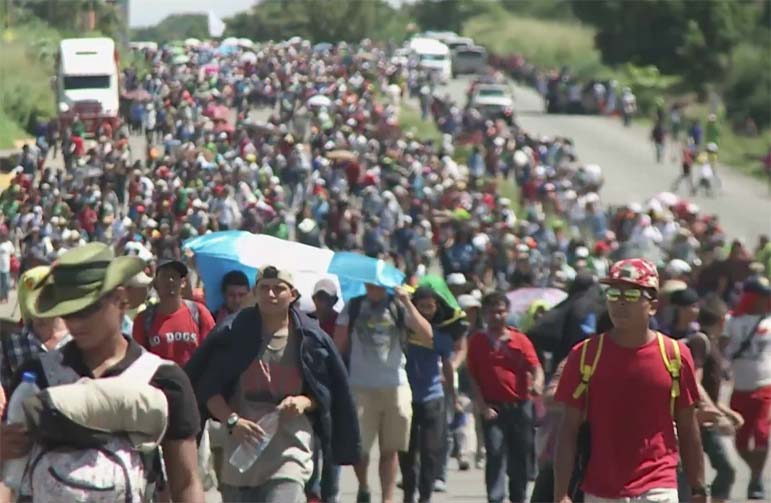 The so-called caravan members currently occupying a stadium in Tijuana, Mexico, number some 5,700, by National Public Radio’s count. The border-hating Left wants Americans to believe that this is a giant exercise in day care, with Latinx mothers using strollers to wheel their babies into the USA. In fact, NPR’s David Welna reports, “About 3,700 of those people are men, about 1,000 are women, and about 1,000 are children.” So, the “caravan” is 65 percent male — mainly unattached young men from Guatemala and Honduras.

I have searched in vain for the scroll or tablet that grants folks like these the right to march north, demolish the Guatemala/Mexico border fence, and demand entry into this country, while, as happened Sunday, throwing stones and bottles at American officials. DHS stated that there were “multiple U.S. Border Patrol agents hit by rocks.”

These diligent public servants defended themselves with tear gas — or “chemical weapons,” as Senator Brian Schatz (D-Hawaii) initially described them, among other deranged comparisons. But, as The Daily Caller discovered, Obama greeted migrants on the southern border with tear gas 79 times and pepper spray on 434 occasions.


Unlike Democrats’ jugular-bursting rage when the Trump Administration employed these substances, Obama’s 513 uses of these irritants fueled the Left’s interstellar silence. Who knows? Maybe these migrants wrapped their asylum applications around rocks and stuffed them into empty bottles.

Despite the bleatings of the no-borders crowd, America need not welcome anyone and everyone who barges in. This Republic is less like a catch-all community college and more like a prestigious university that may receive or reject whomever it wishes. If Georgetown, NYU, and Stanford may decide whom to admit, America should be at least as selective. Conversely, if the Left truly hates borders, then its elite educational bastions immediately should open themselves to everyone who can storm in and snag classroom seats.

So, why must potential Central Americans asylees venture north, all the way to the USA, and forsake Mexico as “the first country of asylum” safe enough to harbor them, which international customs and precedents stipulate? While 1,700 to 2,000 migrants have accepted Mexican president Enrique PeĂ±a Nieto’s offer of homes, doctors, schools, and jobs, thousands more echo Steely Dan’s immortal words: “Oh, no. Guadalajara won’t do!” They then roll inexorably toward San Ysidro, California; Brownsville, Texas, and intervening points.

Rather than north, Guatemalans, Hondurans, and Salvadorans should caravan south — to Panama. It’s the wealthiest country between the U.S. and Colombia. So maybe these folks should seek better lives there.


Meanwhile, U.S. officials in Calexico arrested Honduran Jose Villalobos-Jobel, 29, an acknowledged member of decapitation-happy MS-13. “Villalobos confirmed his story of his gang involvement and intent on entering the United States illegally,” while embedded in the caravan, U.S. Customs and Border Protection stated. “The man also told agents he traveled to the United States border with a large group of people from Central America intending on filing for asylum in the United States.”

Even more worrisome, Fox News reports, the Tijuana Health Department has diagnosed widespread contagious diseases among those itching to reach America. Of the roughly 5,700 squatting there, medical personnel have treated 2,267 people with assorted maladies: