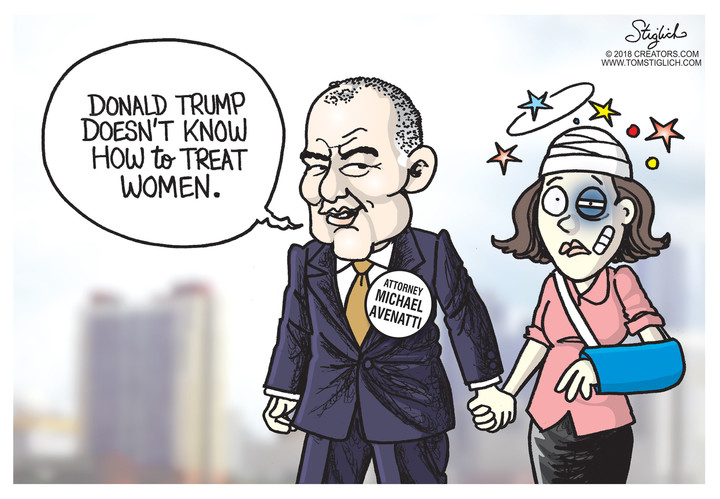 Avenatti's 2020 presidential aspirations, as far-fetched as they were, are now on ice.

"She hit me first" is no way to get the women's vote; that's for sure.

The creepy porn lawyer, as he's often described, is now asking for due process and the presumption of innocence, neither of which he afforded to Brett Kavanaugh during the recent Supreme Court confirmation hearings. To the contrary, Avenatti and his sketchy client Julie Swetnick — a colorful character with her own checkered past — made wild and unfounded sexual assault allegations against Kavanaugh, involving gang rape parties and tales of Kavanaugh's drugging female victims back in the 1980s when President Donald Trump's Supreme Court pick was in high school. The allegations were so outrageous and unbelievable that even Swetnick backtracked on statements made in her September affidavit given to lawmakers by Avenatti.


Last month, Senate Judiciary Committee Chairman Chuck Grassley made criminal referrals against the duo for "materially false" statements, which the Department of Justice is now investigating. "When charlatans make false claims to the committee — claims that may earn them short-term media exposure and financial gain, but which hinder the committee's ability to do its job — there should be consequences," Grassley wrote to then-Attorney General Jeff Sessions and FBI Director Christopher Wray. "These laws exist to ensure there are."

Now the shoe is on the other foot.


Democrats such as Avenatti and scores of high-powered liberal lawmakers insisted during the Kavanaugh hearings that women who make sexual harassment and assault allegations should be believed — even before the facts come in and there's an investigation. Now the huckster wants the American people and the U.S. judicial system to believe him?

The hypocrisy and double standards are beyond striking.

Seeing how quickly the tide can turn — if not boomerang — perhaps the left will now take pause whenever a woman makes an allegation. Instead of deciding the man is guilty without knowing all the facts, maybe Democrats will review the evidence before attempting to destroy his career and reputation. Perhaps they will wait for a full investigation instead of relying on automatic gender preferences and hearsay and automatically convicting him in the court of public opinion.

Given the toxic political climate in America today, that could be wishful thinking.

Previously:
• 11/09/18: Left wants to punish a protector of the Constition for using his First Ammendment Right
• 11/02/18: Winning for the American People
• 10/26/18: The inconvenient fact that globalism is inconsistent with environmentalism