The Triumph of Amoral Will 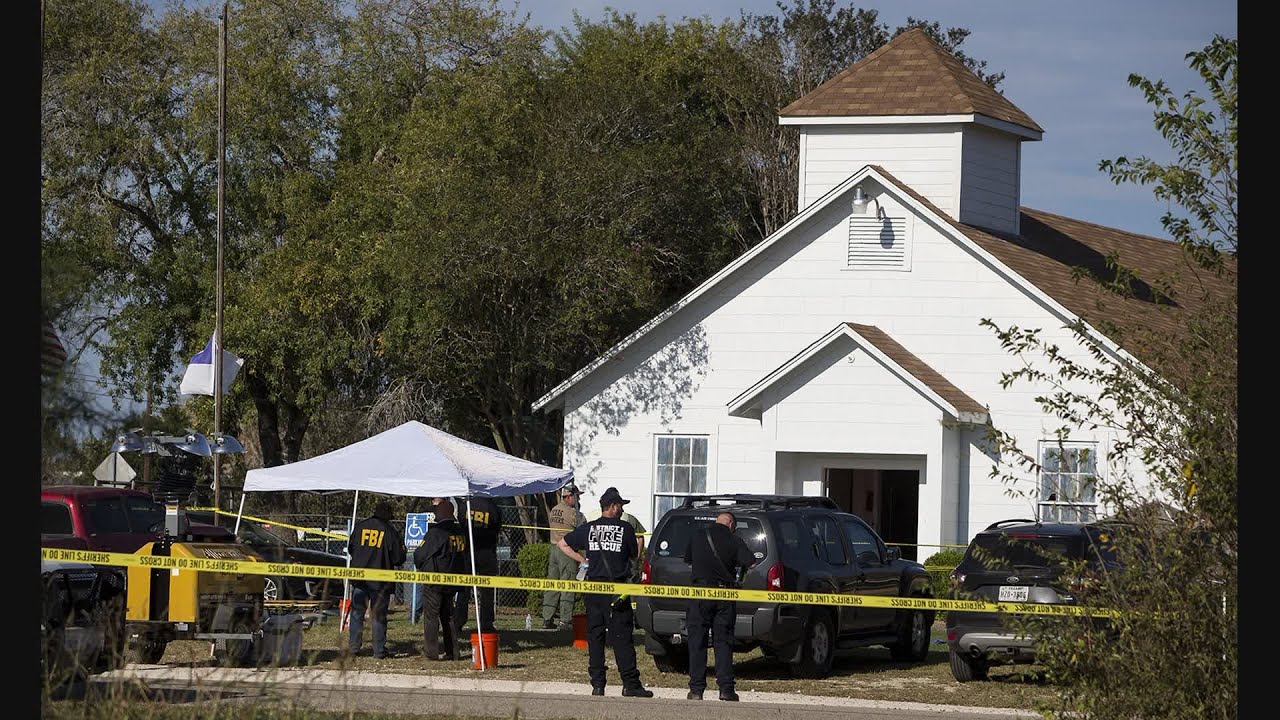 The records continue to tumble: It's only a month since the deadliest single-shooter massacre in American history. Now we have the worst slaughter in Texas history and the deadliest church shooting in US history: Twenty-five people are dead for no other reason that they attended Sunday service in the First Baptist Church of Sutherland Springs. One man walked in, began firing, and, from a weekly congregation of approximately fifty, left almost everyone slain or injured, including the Pastor's 14-year-old daughter.

In between these two bloodbaths, some guy went Allahu Akbar on a Manhattan bike path and killed eight people. Within five days, the usual psycho misfit loner from the teeming swamps of loserdom managed to make a proud Uzbek Soldier of Allah look like a know-nothing piker who can't even rack up a third of the corpse count of some schlub with an unknown grievance against a town of 400 people. Some global caliphate you got there, Sayfullo.

A republic requires virtue, and the decline of virtue is accompanied necessarily by the decline of the concept of evil, and its substitution by exculpatory analysis of the "motives" of evil. A more useful conversation would be on what it takes to remove the most basic societal inhibition - including the instinctive revulsion that would prevent most of us from taking the lives of strangers, including in this case eighteen-month-old babies. That inhibition is weaker in the dar al-Islam, because of Islam's institutional contempt for "the other" (unbelievers) but also because of the rewards promised in the afterlife. Thus, violence is sanctioned by paradise. That is the precise inversion of our society, and yet the weakening of inhibition seems to be proceeding here, too. A church sealed off by yellow police tape: a shameful and astonishing sight, and yet one senses that it will neither shame nor astonish us for long, that something else will come along to make the records books and distract a couple of news cycles.

It was not always so. Over five years ago, I wrote:

If you recall the spate of American school shootings around the turn of the century, you may also remember that in the immediate aftermath of September 11 they ceased - almost as if, in a nation fired to righteous anger and waging war in a just cause, even the most solipsistic psychos can discern that taking out Grade Six will look like an act of feeble narcissism. But the years go by, and righteous anger fades to WMD, Abu Ghraib, Gitmo, Bush lied . . . and the lone-wolf sociopath returns.

"Solipsistic psychos" and "feeble narcissism": As I write, someone is on the airwaves promising that we will soon know the "motive" of the shooter. To dignify what drove this guy to do what he did as "motive" is to torture the word beyond meaning. But then our interest in the concept of "motive" is highly variable. From the Minneapolis Star Tribune:

So, when a "Minnesota man" stabs mall shoppers while yelling "Allahu Akbar!", the motive "remains unclear": The befuddlement is nigh on universal ...for years on end. But a fellow who thinks getting a bad-conduct discharge or falling out with your mother-in-law, or losing your job or being dumped by your girl or having your mom suggest that as you're pushing thirty it might be time to move out of the basement, is a "motive" for shooting up a church or a schoolhouse or a movie theatre or an old folks' home or whatever's next, that guy we're fascinated by, for weeks on end - and then months and years later on in all those "Inside the Mind of..." TV documentaries. They have church shootings in Egypt and Pakistan, too, but in service of cleansing the dar al-Islam of believing Christians, and leaving Islam king on a field of corpses. Our church shootings are in service of ...what?

The words I wrote above came in the wake of the Aurora, Colorado Batman shooting, in which a film about nothing attracted a bloodbath about nothing. Whether or not there is a connection between the two, there is certainly a symmetry. The bike-path jihadist has a rational motive: He wishes to replace western decadence with an Islamic Sharia state. But, for Hollywood, that's all a wee bit sensitive for our delicate sensibilities, so instead we have films in which the techniques of terrorism - bomb plots, beheadings - are divorced from motive:

Film after film shows bad men plotting, scheming, disguising, infiltrating, planting, detonating, slaughtering on an industrial scale. But why? Who knows? And so we watch the world burn, with explosions and fireballs and shattering glass and screaming civilians unmoored from any recognizable reality. Back in the spring, I passed an amiable couple of hours with Tom Cruise in Mission: Impossible 4, an instantly forgettable blockbuster. It opens with some bloke blowing up the Kremlin and proceeds to the usual nuclear-countdown finale in a parking garage, but it isn't about anything. It's like a perfectly executed act of mass terrorism for no reason at all.

I don't think it's a surprise that a vapid culture produces vapid murderers. In a sense, the unusual seriousness of the immediate post-9/11 era imposed a discipline on "feeble narcissism" that extended even unto those "solipsistic psychos".

One should not underestimate the effectiveness of cultural pressures. For a couple of days last week, everyone on TV was an Uzbek activist. My own experience of that benighted stan is limited to a few days in and around Tashkent and Samarkand, not long after the collapse of the Soviet Union. Say what you will about the Commies, but they held the lid on Islam: The Uzbeks I met were nominal, residual Muslims; they consumed alcohol at a fairly impressive rate to this semi-Irishman and there was no imam to give them a hard time over it because the mosques had all been closed. Then in the Nineties the Wahhabists and Salafists showed up and started walking around a ton of Saudi cash, and slowly, inevitably, Islam awoke...

It's not an attractive model, but in Central Asia Moscow held its subject peoples' pathologies in check. So too did the Raj in what's now Pakistan. What cultural pressures would suppress our worst pathologies, would staunch that descent into "feeble narcissism"? For those of us who think the Islamization of the west is the most pressing issue of our time, and the one that will determine our future, the depraved one-man bloodbath in a house of God is not merely an affront and an abomination - but also embarrassing in its self-indulgence and decadence. It has instantly obliterated the Uzbek jihadist, just as the Las Vegas attack instantly obliterated that weekend's vehicular diversity by a Somali in Alberta, and the two Frenchwomen fatally stabbed in Marseilles, and the trial of a teen jihadist in Oslo... As I put it just a few weeks ago:

All these events, by fiercely committed ideologues in multiple jurisdictions in service of a global civilizational struggle, were all but forgotten, banished to the in-brief sidebars at the foot of page 37 by one apparently non-ideological American retiree who, unlike the aforementioned, was extremely good at killing large numbers of people.

And now by a 26-year-old loser, likewise way better than Johnny bin Jihad at killing large numbers of people.

I confess to a certain resentment at this. I regard the Albertan, French and Norwegian stories as far more relevant to where our world is heading. It is not a small thing when a young Frenchwoman can have her throat slit in broad daylight at a major public venue in a European metropolis, notwithstanding that the Mayor of London and others tell us we have to accept that it's now part and parcel of life in a big city. Yet in a certain sense these events are ineffectual - as the corpse count of a Stephen Paddock reminds us. And every Stephen Paddock makes it easier for all those who want to brush off Islamic supremacism and retreat to all those lame-o lines about how you've got more chance of being killed by a toppling household appliance than by a terrorist, and anyway, even when the shooting starts, half-a-dozen Isis cells can't match one white-male gun nut. Why didn't the Somali guy, the North African, the Caucasian jihadist figure out what one 64-year-old from a Nevada retirement community did? That all over the map there are soft targets with large numbers of people penned into small, tight, open-air spaces - and right across the street tall hotels whose upper floors offer easy opportunities for a bloodbath.

Or, failing that, unprotected churches and schoolhouses and old folks' homes...

America's four deadliest single-shooter mass murders occurred in the last decade. Only one of them - the Orlando nightclub massacre - can be said to have a political or ideological component. The rest seem to be a peculiarly contemporary form of narcissism - that, when my life heads south, the only way to give it meaning is to take large numbers of people with me. There is no cause, no fealty, no "Allahu Akbar!" - because pointless slaughter is the supreme triumph of amoral will: Who needs Allah? You're your own Allah. Unlike Manchester or Nice or Paris or Berlin or Brussels, there is no meaning: Indeed, the only meaning is the meaninglessness; that is the point - the black void at the heart of the act.

Texas officials now believe they have their "motive" - in their words, "a domestic situation going on in this family"; in my words, "the black void at the heart of the act". It is a grim phenomenon, its accelerating proliferation is deeply disturbing, and it is not unconnected to the broader societal weakness in which Islam senses its opportunity.