Get ready for four more years of Clinton scandals 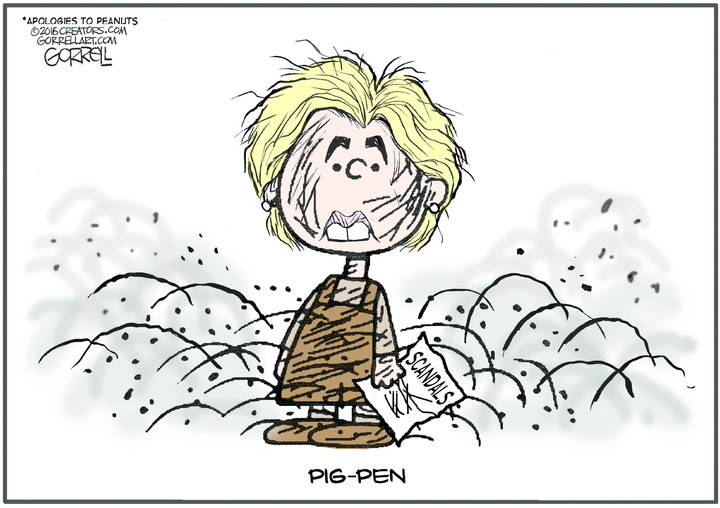 It is a common refrain among despondent Americans watching the substance-free, scandal-driven 2016 campaign: "My G0D, I can't wait for this to end."

Well, I have some bad news: It's not going to end. If Hillary Clinton wins, the cycle of scandals, lies, investigations and coverups will continue unabated for the next four years.

Until recently, Democrats were praising FBI Director James Comey as a "great man" and a "wonderful and tough career public servant . . . with the highest standards of integrity" after he recommended against prosecuting Clinton. Today, they have seamlessly transitioned to attacking him as a partisan hack for informing Congress that the FBI had uncovered emails potentially germane to their Clinton probe - on a computer they had seized in a separate investigation of disgraced former congressman Anthony Weiner (for allegedly sexting with a 15-year-old girl - you can't make this stuff up).

Then the Wall Street Journal reported this weekend that, according to sources, the Obama Justice Department limited efforts by FBI agents to investigate whether the Clinton State Department gave special access and favors to Clinton Foundation donors. Congress will certainly investigate whether there was improper interference in those FBI efforts. And there will almost certainly be investigations into ABC News' recent revelations that State Department officials gave special treatment to Clinton Foundation donors after the Haiti quake, asking for them to be identified as "FOBs" (friends of Bill Clinton) or "WJC VIPs" (William Jefferson Clinton VIPs) while sending others to a government website.

There will also be investigations into the Wall Street Journal's revelations that the political organization of Virginia Gov. Terry McAuliffe (a Democrat who is a longtime "FOB"), and the state Democratic Party he controls, steered some $675,000 into the campaign of Virginia Senate candidate Jill McCabe, whose husband, Andrew, later helped oversee the Clinton email investigation as deputy director of the FBI. The Post reports that the FBI is also investigating whether McAuliffe, who was an unpaid director of the Clinton Foundation, violated a statute regarding U.S. citizens' lobbying on behalf of foreign governments.

Then expect a battle royal with Congress if Clinton tries to elevate close aides such as Huma Abedin, Cheryl Mills and others implicated in her email scandal to positions of public trust. In announcing that he would recommend against prosecution in July, Comey made a point of declaring that "this is not to suggest that in similar circumstances, a person who engaged in this activity would face no consequences. To the contrary, those individuals are often subject to security or administrative sanctions."

Republicans will insist that such sanctions be imposed on anyone who mishandled classified information, received immunity or took the Fifth in the Clinton investigation - including denial of access to classified material. And they may also want to look into how Abedin failed to turn over husband Anthony Weiner's laptop containing thousands of Clinton emails - after she swore under oath that she had handed over "all the devices" she possessed containing such emails.

Congress will almost certainly take a careful look into the leaked 12-page memo by Bill Clinton confidant Doug Band in which he details the squalid underside of what he calls "Bill Clinton, Inc." and the shady nexus between the Clinton Foundation, Bill Clinton's private speech income, Band's consulting firm Teneo and the Clinton State Department.

In other words, the Clinton honeymoon is over before it even begins - and rightly so. It is simply inconceivable that Clinton aides removed classified "headers" from emails and used BleachBit to erase emails after receiving a congressional subpoena to preserve them, and yet not a single person has been punished. The whole Clinton machine seems to have an immunity from consequences. That is unhealthy in a democracy.

Today, some in the media may be turning a blind eye to Clinton's scandals because they are terrified of the prospect of a Trump presidency. But once that prospect is off the table, the press may finally turn on her. And with just 11 percent of Americans believing she is honest, Clinton will have little public support to fall back on if they do.

The Clintons are like the "Peanuts" character Pigpen - wherever they go, it seems, their own private cloud of controversy and corruption follows. In the 1990s, it was Whitewater, the firing of White House travel aides, Madison S&L, cattle futures and bimbo eruptions. Today, it is the Clinton Foundation and her private email server. And tomorrow - who knows?

Once she takes office, Clinton and her team will almost certainly set in motion an entirely new set of scandals. As a former CIA psychological profiler who spent years studying the behavior of terrorists and criminals recently pointed out to me, "the best predictor of future behavior is past behavior in similar situations." This individual continues: "We do know enough about Clinton's past behavior to know what she is likely to do if elected President. She will sell access to foreign governments to enrich herself; she will hide her true intentions and actions behind a lack of transparency, even if it means flouting the law; she will lie to the public to advance her political agenda, her career and protect her reputation, as she lied to the loved ones of the patriots killed in Benghazi . . . and she will continue to carry out her elected duties in corrupt ways."

If Clinton wins next week, we are in for four more years of scandal.