The undiagnosed issues with claims of school-board 'domestic terrorism' 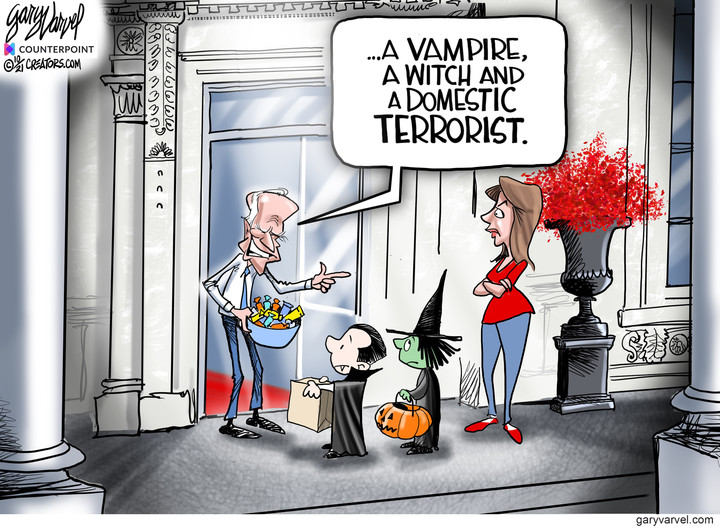 In our bifurcated political culture, most Americans not only have forgotten how to listen to those who disagree with them but have also stopped being willing to credit opponents with good motives. That's part of the reason why just about anything that someone thinks is awful is quickly labeled by somebody as being morally equivalent to the Nazis.

But we've now gone beyond the reflexive use of inappropriate Holocaust analogies by both the right and the left. We're also at the point where protest movements are similarly demonized by anyone that happens to disagree with them. Violent protesters, especially those who seek to trespass on government property and commit acts of violence against law-enforcement officers are always in the wrong, whether we're discussing the Jan. 6 Capitol riot or Black Lives Matter riots. Yet those who sympathize on some level with some of those committing those crimes now regard the rioters on their side of the spectrum to be principled "mostly peaceful" demonstrators and those on the other side as "domestic terrorists."

When government institutions, especially those responsible for law enforcement play the same game, this trend stops being just a lamentable example of polarization and crosses the line into an abuse of power.

That's the only way to describe the decision of U.S. Attorney General Merrick Garland to treat protests at school boards around the country concerning the implementation of critical race theory as a federal problem that warrants the deployment of the FBI in order to put it down.

Garland's directive was a direct response to a letter he received from the National School Boards Association. It complained that a movement consisting of parents angry about the way local boards were implementing curriculums and lesson plans influenced by critical race theory, as well as controversial coronavirus pandemic policies were guilty of "threats of violence" and "acts of intimidation." While not citing a single act of actual violence, the left-leaning NSBA demanded that the Biden administration deploy the forces of "the U.S. Department of Justice, Federal Bureau of Investigation (FBI), U.S. Department of Homeland Security, U.S. Secret Service, and its National Threat Assessment Center" to deal with those lining up to make critical comments at school board meetings. What's more, it specifically also demanded the involvement of the FBI's National Security Branch and Counter-Terrorism division and that the authority of "the Patriot Act in regards to domestic terrorism" be invoked to put down the protests.

That this group thinks those criticizing their decisions, whether in a respectful or uncivil manner are not just the moral equivalent of terrorists but deserving of prosecution under the same law that was passed in order to give the authorities free rein to battle Al-Qaeda terrorists is mind-boggling. Still, it's not quite as mind-boggling as the fact that a respected liberal Jewish jurist like Garland, who was widely lauded as a moderate when former President Barack Obama nominated him for a seat on the Supreme Court (for which he never received confirmation) would actually agree with them.

That Garland thinks obnoxious critics at school-board meetings are terrorists is bad enough. But it's worth pointing out that his decision came in the same week that left-wing critics of moderate Democrats like Sens. Kyrsten Sinema and Joe Manchin were engaging in harassing them in ways that are far worse than getting screamed at by parents at public meetings. Sinema was chased into and then filmed while using the bathroom at Arizona State University, where she teaches, by those who criticized her refusal to go along with President Joe Biden's $3.5 trillion spending bill. But rather than issuing a stern condemnation, Biden dismissed it, saying it's "something that happens to everybody" who doesn't have Secret Service protection like he does.

Nor did Garland think such harassment worthy of a federal investigation. During the Trump administration, many Democrats justified the public harassment of those associated with the former president or the Republican Party in restaurants and other public places. The mainstream media that considers a red MAGA cap on someone's head or even the flying of American flags as something that requires a trigger warning has been fine with demonizing conservatives. But when parents get rowdy at school-board meetings or even cross the line into inappropriate protests at private homes (something that happens to conservative Supreme Court justices or media figures without a response from the FBI), then it's terrorism.

The real problem here isn't liberal hypocrisy; it's the idea that the federal government is serious about deploying its resources in order to put down protests against critical race theory. That is something that should not only warrant outrage from civil libertarians about this attempt to stifle legitimate dissent, but deep concern from a Jewish community that is directly threatened by the way these radical theories give a permission slip to anti-Semitism.

These toxic ideas that seek to divide people on the basis of race and alleged "privilege" in the name of "anti-racism" is an attempt to change the way Americans think about their country and its history. Rather than merely an acknowledgment of a troubled past — and the long and largely successful struggle to achieve civil rights — it treats the United States as an irredeemably racist nation. It seeks to enshrine race consciousness at the heart of every discussion and to make us view people solely through their skin color or origin rather than as individuals. It is a poison that undermines national identity and patriotism.

Though it is rightly resented by many Americans, it poses a particular problem for Jews because it is a political catechism rooted in intersectional ideology about Third World nations and "people of color" locked in a never-ending struggle against white oppression. It puts those who don't fit into an approved category of intersectional victims in the unfortunate position of either denying their own "privilege" or being enlisted in a struggle that has little to do with a celebration of diversity, let alone the manifold blessings of American liberty.

Since intersectionality treats the Palestinian war on the existence of Israel — the one Jewish state on the planet — as part of the same struggle as the battle for civil rights in the United States, it puts Jews in the category of possessors of white privilege even though most Israeli Jews are themselves "people of color" because they trace their origins to the Middle East and North Africa. In that way, it has served to justify and rationalize anti-Semitic rhetoric and activism aimed at depriving Jews or rights that no one would think to deny to anyone else.

Yet rather than being among the leaders of the fight against these terrible ideas, much of the organized Jewish community has gone silent or actually supports critical race theory so as to retain their good standing as liberals and sympathizers with the Black Lives Matter movement. The Anti-Defamation League — the one group tasked specifically with the job of defending Jews against anti-Semitism — is not only not fighting critical race theory but has joined with those falsely labeling anti-CRT activists as "extremists."

Sadly, many Jews who see every issue as a partisan litmus test agree with them as opposed to standing up for the right to protest and against a set of ideas that threatens their security. The decline of civility in public discourse is a problem on both the left and the right. But those liberals who have been speaking nonstop about alleged threats to democracy since Donald Trump entered politics need to realize that the DOJ treating protests as terrorism is the real authoritarian threat. Jews ought to be cheering on those parents who are fighting back against critical race theory at their local school boards, not those smearing them as terrorists.