When everything is imaginable --- and nothing is sacred 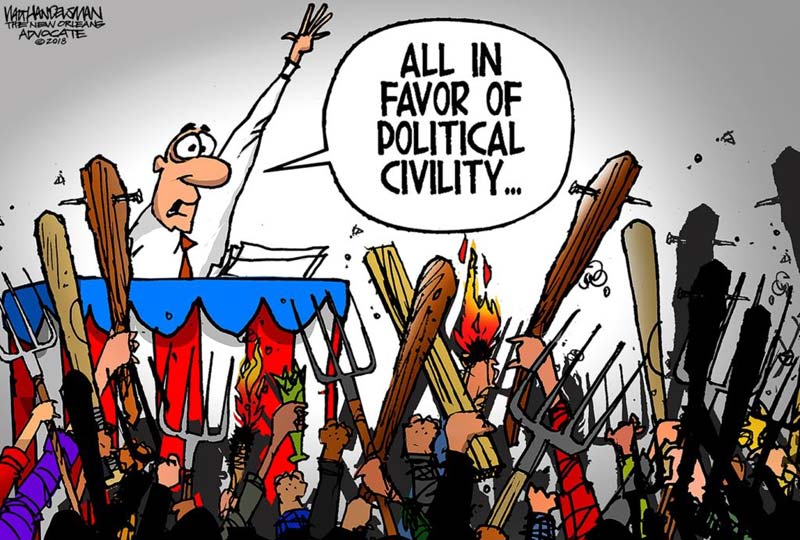 Maximilien Robespierre and his Jacobin "Committee of Public Safety' highjacked the late 18th-century French Revolution. As supposedly more authentically radical revolutionaries, Jacobins did away with their supposedly less radical first-generation Girondists, who themselves had helped to liquidate the French monarchy and many of the Ancient RĂ©gime.

What followed Robespierre's "Reign of Terror" were cycles of revolution until the appearance of Napoleon's military autocracy. The United States, mutatis mutandis, currently seems on the verge of a new cycle of such leftwing radicalism in spirit and substance — as the old Democrat Party appears to be withering away and a new Socialist Democrat Party assumes its place.

Yet it proved hard for an overwhelmed Grassley to distinguish the shouting in the gallery from the even more disruptive antics of the Democrat senators at his side who were vying with the protestors to authenticate their leftwing fides.

After the appearance of Christine Blasey Ford, angry young women cornered Sen. Jeff Flake in an elevator, shaking their fingers at him, and screaming in his face. And the melodrama of the mob worked. A shaken and flushed Flake altered his original position and backed away from his earlier vow to confirm Kavanaugh outright. The new radicals had taken the erstwhile advice of Barrack Obama to "get in their faces" and "punish our enemies," but took it to a new, more literal level. Or in the words of Rep. Maxine Waters, progressives were now to hit the streets: "If you see anybody from that cabinet in a restaurant, in a department store, at a gasoline station, you get out and you create a crowd, and you push back on them, and you tell them they're not welcome anymore, anywhere."


Republican senators in the confirmation hearings were written off by congressional Democrats and the media as "old white men," illegitimate inquirers due to their age and race. Traditional liberal Democratic fixtures in the Senate like Diane Feinstein and Chuck Schumer sought to move hard left in the twilight of their careers, and now appeared as aged firebrands mouthing 1960s rhetoric.

Presidential press conferences, always boisterous and messy, have become akin to street theater. Reporters try to hijack the proceedings, as if they were to be both questioners and answerers. Even a loud and often uncouth President Trump seems shaken when told by journalists whom he should call on next.

In Senate hearings, ancient ideas like due process, innocence until guilt is proven, cross-examination, the inadmissibility of hearsay, the need for corroborating testimonies and physical evidence, and statutes of limitations fall by the wayside, dismissed as irrelevant, problematic or counter-revolutionary.

"Fake-news" is a misnomer for partisan journalism when the New York Times falsely claims UN Ambassador Nikki Haley ordered $50,000 drapes for her office, or other media report that a teenage Brett Kavanaugh sexually assaulted a woman in a boat off the coast of Rhode Island. The media is not merely an extension of the progressive movement, but now proud to affirm why its old professed adherence to disinterested reporting is considered outdated — given that the perceived threats of a Trump presidency deserve overt opposition, not mere coverage.

Senatorial inquisitors with their own questionable backgrounds pose as ethicists in their dismantling of the character of Brett Kavanaugh. Just as Jacobins demolished their opponents for lapses that they themselves had freely shared, so progressive senators went back in time to tag Kavanaugh with alleged teen-aged indiscretions, even while their own adult wrongdoings were forgotten. Thus Sen. Richard Blumenthal's made-up Vietnam veteran persona is now a mere indiscretion. Sen. Corey Booker's yarn of an imaginary friend T-Bone is a long-ago construct. Sen. Elizabeth Warren's fanciful Native American heritage is a slight memory lapse. And Sen. Joe Biden's fictional coal-mining family and past plagiarism are the stuff of normal exaggeration.

Yet the new radicalism is not just one of style or hypocrisy.

If five years ago Sen. Bernie Sanders was considered an eccentric socialist relic from the 1960s and twenty-something Alexandra Ocasio-Cortez was a Manhattan bartender moonlighting as a social activist, today both in popular culture have eclipsed paleo-Democratic functionaries such as Schumer, Feinstein, Hillary Clinton, and Nancy Pelosi.

They, and others such as Sens, Cory Booker, Kamala Harris, and Kirsten Gillibrand, are the new faces of a rebranded Democratic Socialist party, whose chief agendas are universal free college tuition, the cancellation of over $1 trillion in student debt, the extension of Medicare to everyone, the abolition of ICE, the rapid end to fossil fuel use, and a vast reduction in the defense budget. When asked how to pay for it all, they do not sheepishly shrug their shoulders, but confidently and boldly promise to take the money from those who have it by far higher taxes on the "rich". The European Union and the United Nations, not the US Constitution, are more their paradigms of social justice.

What were the conditions that created these new Jacobins?

It was not just the ascendance of the hated Donald Trump, although the election of the first president to have neither political nor military experience both scared and inspired the new socialists.

Trump terrified them, because he sought to craft a conservative populist workers' movement that threatened to erode the natural Democratic base. And he did so with slash-and-burn tactics, antithetical to the traditional Marquess-of-Queensberry Republican rules that had emasculated past Republican presidential candidates.

But Trump also inspired radical leftists by encouraging them also to ignore precedent, and normal political perquisites. Instead, they should similarly consider their own political elite — especially the old Clinton machine — as being as irrelevant and expendable as the Romney and Bush wing of the Republican Party.

Far more influential than Trump for the Jacobins, however, was the Obama legacy, both its perceive advantages and downsides.

On the plus side for the Jacobins, Obama's two successful elections encouraged the new radicals to believe that open borders, changing demography, radicalized identity politics, bloc voting and an increasingly self-destructive and shrinking white working class had ensured a new progressive electoral future, based on a permanently different sort of American electorate. How we appear would now be as important as who we are — especially in a salad-bowl America that had transcended the old melting pot. Black, brown, Asian, female, gay, bisexual, or transgendered were essential clannish concepts that, if properly massaged and aggregated, would result in a 51 percent popular majority. A candidate's or activist's political credibility hinged on belonging to one or more of such tribes.

But on the minus side, the Democratic Party undeniably had suffered its greatest setbacks in more than half a century between 2009-2017, even as Obama became a mythical figure in party lore. Democrats had lost the House, the Senate, the majority of governorships and legislatures, and de facto the Supreme Court. Yet the new Democratic socialists sought to square that circle of Obama's successes and their own party's failures by insisting that Obama's ancestry and leftism had been essential to his success, but that the Democrat Party's retrograde traditionalism had let Obama down and eventually proved toxic and fatal on down ballots.

More rational observers might have concluded that Obama took the party too far leftward, ignored its alienation from the working classes, and focused instead on his own identity politics; and that, selfishly, he had seen his own transformational candidacy and presidency as something apart from his party's viability and future. But instead, the Jacobins moved even more radically to the left.

There were also other parents who birthed the new Jacobinism. The campus now led the progressive movement, as everything from identity politics to safe spaces was imported and institutionalized as the new Democratic Socialist party dogma. Again, nowhere was that more apparent than in the Kavanaugh hearings. Democrats more or less appropriated the hearings and turned them into a campus-like inquest into sexual harassment charges — thereby discarding calcified constitutional traditions such as due process and the rights of the accused to a presumption of innocence, rigorous cross-examination, and the protections from hearsay and accusations well beyond any statute of limitations.

The Halls of Congress resembled the campus protests that had met a Ben Shapiro or Charles Murray when they dared give a campus speech. Protestors bullied senators as enemies of the people and turned the senate gallery into a veritable campus quad. On the theory that both parties were controlled by aging white people soon to be irrelevant (given their spent and tired constituencies), the youth and diversity of the campus also inspired a national radical drift.

The new sectarianism has also inspired the Jacobins. Globalization, open borders, deindustrialization, and red- and blue-state polarization have intensified old political divides into new additional regional animosities. The Democratic Socialists are the party of the coasts and of the cities, where most of the high-tech industries, national politics, and universities are anchored. The hipster profile of a thirty-something, unmarried, childless, urban renter and loft-dweller is the new Democrat icon, not the blue-collar, lunch-pail bloke fighting commuter traffic in his used car to get home to his working wife, kids, and mortgaged tract house. Think of the recent Democrat campaign film, "Life of Julia," or the "Pajama Boy" Obamacare ad. The new radicals believe that they are not just the future of the Democrat Party, but also are avatars of global culture itself, especially ecumenical ideas such as using the state to replace fossil fuels, subordinating nationalism to continental or world governance, and recalibrating the U.S Constitution as something akin to the looser protocols that govern most other countries.

The Jacobins will either overreach and soon rendezvous with something like a Thermidor correction. In American political terms, that would mean that after going off a McGovern cliff and marginalizing the party, Democrats will regroup, and climb back to a Jimmy Carter or Bill Clintonian center. Remember, that until Obama, for 44 years (from 1964 to 2008) no Democrat presidential candidate had ever won the popular vote without a southern accent, the old public stamp of Democratic moderatism.

Or, in contrast to a centrism correction, we may see even more radical street theater: walking out on Senate votes; taking to the streets; mainstreaming Occupy Wall Street, Antifa, and Black Lives Matter; seeking to remove an elected president by weaponizing the FBI, DOJ, and CIA, turning to impeachment, the 25th Amendment and the Emolument Clause, states' rights nullifications of federal law, or using deep-state Resistance members or liberal courts to subvert executive governance.

If the Democrats do not capture the House, and thus cannot impeach Trump and send him to the Senate for trial, and thereby stall his agendas, then the Jacobins will face their own Thermidor reaction.

But if they prove successful, then everything is imaginable — and nothing is sacred.