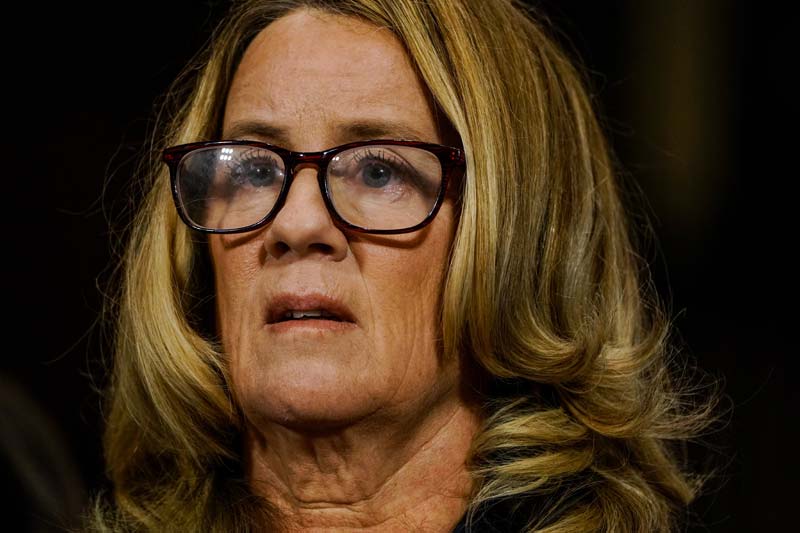 According to her testimony before the Senate Judiciary Committee on Thursday, Christine Blasey Ford's memory of being sexually assaulted by Brett Kavanaugh in 1982 was shared and recorded for the first time in 2012 — 30 years after the event — because she wanted her remodeled house to have two front doors.

As her husband disagreed with this unconventional suggestion, the couple sought counseling. It was during the counseling that she described the assault, although Kavanaugh was not named in the therapist's notes.

Six years later, when Kavanaugh's name was said to be on the shortlist for the Supreme Court, she confided her story to the Washington Post and Representative Anna Eshoo of California, and then to Senator Dianne Feinstein of California. Six weeks after receiving a letter from Ford, Feinstein revealed its existence to other members of the committee. By some mysterious process, Ford's name and her allegation then appeared in the press.

Finally, on Thursday, after much negotiation, it happened: Ford vs. Kavanaugh. It was the personification of the schism at the heart of American life today: not so much woman vs. man as Democrat vs. Republican. (This country is much more clearly divided along party lines than gender lines.)

Kavanaugh went before the Senate Judiciary Committee and poured every ounce of emotion he could summon into saving his nomination.

It is true that other accusations of sexual misconduct have been leveled at Kavanaugh. But none of these stories, including Ford's, would secure conviction in a criminal case, because there is not a shred of evidence to corroborate the recollections of those telling them.

Having watched Ford testify, I have little doubt that she believes the truth of what she said. But as an historian who has spent many long hours interviewing people about past events, including in some cases highly personal matters, I do not regard that as good enough to destroy the reputation of a distinguished judge.

Human memory is, generally speaking, bad at history. Were I writing Kavanaugh's biography, I could not possibly depict him, on the basis of uncorroborated testimony provided long after the fact, as a man who attempted rape in his youth and lied about it later. His memory is also unlikely to be perfect. But his story — that, as a young man, he glugged beer and had the usual Catholic hang-ups about sex — is more plausible. Advertisement

"Maybe so," comes the response, "but the Republicans used devious delaying tactics to keep Merrick Garland off the Supreme Court." The difference is that Garland's reputation was not destroyed in the process.

The #MeToo movement is revolutionary feminism. Like all revolutionary movements, it favors summary justice. Since April 2017, more than 200 men have been publicly accused of some form of sexual offense, ranging from rape to inappropriate language. A few of these men seem likely to have committed crimes and are being prosecuted accordingly — notably the Hollywood mogul Harvey Weinstein. But #MeToo seems to have created a single catch-all crime, in which rape, assault, clumsy passes, and banter are elided into one.

With a few exceptions, reputations have been destroyed and careers ended without due process. "I believe her" are the fateful words that, if uttered by enough people, perform the roles of judge and jury.

Sexual harassment is bad, no question. And yet a much bigger threat to women's rights is largely ignored by Western feminists. As my wife likes to point out, verse 2:282 of the Koran states that a woman's testimony is worth only half of a man's testimony in court. (Some people want the opposite to apply in Ford v. Kavanaugh.) Wherever sharia law is imposed — from the armed camps of Boko Haram or ISIS to the sharia courts found in most Muslim-majority countries — it is women who lose out. Do Senate Democrats care? No. When my wife testified on this subject last year, they literally ignored her.

Let me offer two hypotheses about why we are in this mess. The first is that the world's elite educational institutions are now so dominated by self-styled liberals and progressives, that an inexorably rising proportion of people in other elite institutions — corporations, the media, government agencies — now subscribe to all or part of their ideology.

Ask today's graduate trainees (for example) if they think there should be limits to free speech so that people "feel safe." Ask them if "implicit bias" is something all white men suffer from. Ask them if the achievement of "diversity" matters more than promotion on merit. The answers will mostly be yes. Campus politics is spreading. Soon you, too, will be asked to state your preferred pronouns at the beginning of each meeting, just in case someone present favors the gender-neutral "zhe."

My second hypothesis is that the rise of internet platforms such as Facebook, YouTube, and Twitter has disastrously exacerbated the polarization of not only the United States but all Western societies. For it is on social media that the show trials of our time are now held, as anyone knows who followed Thursday's hearing on Twitter.

The rule of law can be killed in more than one way. In liberal nightmares, a despotic president sweeps aside the Constitution in the manner of a Latin American caudillo. But in conservative nightmares, the graduates of Yale Law School agree that social justice would be best served by discarding the presumption of innocence and relying on Twitter polls to determine guilt.

If only Tom Wolfe were still around to write "The Bonfire of the Legalities."

© 2022 Niall Ferguson. With permission of the Hoover Institution. First appeared in The Boston Globe.