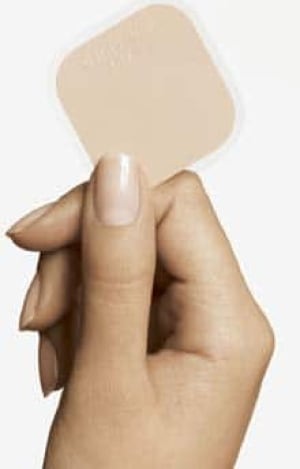 Over the past decade, as people have searched for avenues to a better life - more energy, mindfulness, fitness and beauty; less pain, aging and weight - the "wellness" industry has exploded. The market, estimated at $3.7 trillion in 2015 by the Global Wellness Institute, generates so many products and programs that it's difficult for consumer and health watchdogs to keep up. Among the increasingly popular offerings that have drawn skepticism are vitamin patches, which not only ostensibly provide users with an influx of nutrients but are frequently marketed as a tool to kick-start a lifestyle makeover.

Transdermal patches are adhesive devices that deliver a dose of medication - or, in the case of wellness products, vitamin and mineral "supplements" - to the bloodstream through the skin. The Food and Drug Administration approved the first medicinal transdermal patch for treating motion sickness in 1979. Since then, patches designed for birth control, smoking cessation, dementia and more have found FDA-approved success.

That means the FDA is often playing catch-up on claims made about "supplement" products. "FDA is aware that some transdermal vitamin patches are being falsely marketed as dietary supplements; the agency considers this action to be health fraud," said Jeremy Kahn, an FDA spokesman. "Generally, FDA considers any patch product that is promoted as a dietary supplement to be an unapproved new drug and a misbranded drug."

Although clinical trials regarding the efficacy of transdermal vitamin patches are increasing (such as a current study from the National Institutes of Health about a transdermal vitamin D3 delivery system), a lack of transparency within the industry - in addition to little independent testing and aggressive marketing strategies - could prove to be a health hazard for those who require supplemental nutrients, such as bariatric surgery patients who opt for patches without proper clinical testing to back them up. There are a handful of studies in the works which will look at the long-term effects of patch vitamins for bariatric patients, but for now, the American Society for Metabolic and Bariatric Surgery continues to recommend chewable vitamins.

"My message for the public is 'buyer beware.' The evidence for nutrient absorption through the skin barrier is very limited, and many of the health-related claims are unsubstantiated. The companies need to provide proof for the claims," JoAnn Manson, a physician, chief of preventive medicine at Brigham and Women's Hospital and Harvard professor, said by email. "I would ask the companies to 'show me the data' - show me evidence that absorption is effective and blood levels of these vitamins and minerals increase appropriately."

A request for data sent to PatchMD elicited this email response from customer support specialist Josefin Salve: "We have a very exciting study that was presented at Cal Poly Tech (and will be published in medical journals in the fall) comparing blood test results of study participants taking pills orally versus using our patches," Salve wrote. "While we haven't yet been given the results, researchers have told us that we'll be very happy with them."

While data confirming the benefits of transdermal vitamin patches is sparse, companies rely heavily on social media testimony, anecdotal evidence and peer-to-peer referrals to fuel their often staggering sales. Several transdermal vitamin patch companies market their products - either as stand-alone items or part of a multipronged regimen of shakes, pills and patches - as both a health solution and a path toward becoming part of a larger lifestyle movement or wellness community.


One of the most successful companies, Le-Vel, has surpassed $1 billion in profits by using a multilevel marketing (MLM) sales structure to promote an eight-week Thrive Experience, which claims to help users reach "peak physical and mental levels." The core of the program is a proprietary transdermal patch, which Le-Vel claims, promotes "clean and healthy weight management" as part of an overall shift toward wellness; the cost per month of the patch and complementary capsules and shake mix is between $100 and $300. Rather than research, the website shares only testimonials and this disclaimer: "There are no guarantees of specific results and results may vary." (Le-Vel did not respond to a request for comment.)

"There is very little clinical evidence to prove the health claims of transdermal vitamin patches, and I advise people to be very wary, especially to claims such as suddenly achieving weight loss by putting a vitamin patch on your skin," said Taylor Johnson, a registered and licensed dietitian nutritionist based in the District. "Anything promoting a quick-fix health claim is a red flag to me."

What about the frequent claim that transdermal patches are better for those individuals who have trouble swallowing pills? Manson rebutted that as well. "For patients who have difficulty swallowing a . . . tablet or capsule," she said, "other formulations are already available, including chewables, mints and sublingual (under the tongue, such as for vitamin B12) versions."

And although there's no evidence that - if you're a relatively healthy individual - patches will do any harm (except to your wallet), experts say it's important not to give into the mind-set that a patch - or pill - will optimize health better than a well-rounded, healthy diet. (Sorry, vegetable-averse folks.)

"Vitamins and minerals eaten the way nature packaged it, in whole-food form and not as one isolated nutrient or supplement, has been proven to be superior and provide tremendous health benefits," Johnson said. "Synthetic versions are sometimes not recognized or used by our body in the same way as naturally occurring vitamins and minerals . . .[and] are not nearly as bioavailable or absorbable. My advice to clients is always emphasizing real, unprocessed, whole foods first."