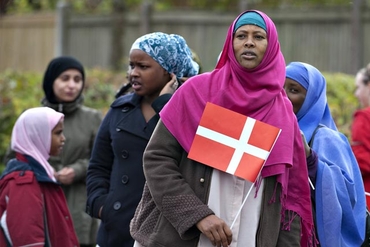 They got to Denmark..

A quarter-century ago this summer, Samuel Huntington published the first version of what would become his book The Clash of Civilizations. I've quoted it many times over the years, not least its passages on what Huntington called "Islam's bloody borders". The man himself has been dead a decade now, and so on the twenty-fifth anniversary of his famous thesis it falls to Francis Fukuyama, Huntington's former pupil and author of The End of History, to do the honors:

Since Samuel Huntington's Clash of Civilizations has been contrasted with my own End of History in countless introductory International Relations classes over the past two decades, I might as well begin by tackling at the outset the issue of how we're doing vis-Ă -vis one another. At the moment, it looks like Huntington is winning.

That's big of him, all things considered. Fukuyama has attempted to modify his thesis over the years but it doesn't get any sounder: He argued a book or two back that democratic societies were all trying to "get to Denmark", but, if you've actually set foot in Denmark recently, you might be inclined to think that the challenge for Danes is to figure out a way to get back to Denmark. Elsewhere in Scandinavia, it's easier to imagine Sweden getting to Sudan than Sudan getting to Sweden. Huntington discerned a lot of this, as Fukuyama concedes:

Huntington was very prescient in his depiction of "Davos Man," the cosmopolitan creature unmoored from strong attachments to any particular place, loyal primarily to his own self-interest. Davos Man has now become the target of populist rage, as the elites who constructed our globalized world are pilloried for being out of touch with the concerns of the working class. Huntington also foresaw the rise of immigration as one of the chief issues driving populism and the fears that mass migration has stoked about cultural change. Indeed, Carlos Lozada of the Washington Post has labeled Huntington as a prophet of the Trump era.

"The fears that mass migration has stoked about cultural change" is a coy way of sidling up to the way I put it in America Alone - that culture trumps economics. Pakistanis came to Yorkshire because the mills needed workers. The mills closed anyway, but the workers stayed, and built their mosques and madrassahs. Today, as I mentioned on Tucker's show a few weeks back, automation (and predictions that it will eliminate 30 per cent of all jobs) ends any economic rationale for mass immigration. That leaves little else to justify it except virtue-signaling. Which is more than enough, judging by the hysteria that greets anybody who seriously questions demographically transformative immigration policies. Fukuyama isn't quite ready to concede the cultural point to Huntington, and attempts instead to sidestep it:

Identity is a much broader and more flexible concept with which to understand contemporary politics rather than religiously based culture or civilizations. Identity is the modern concept that arises out of the belief that one has a hidden inner self whose dignity is at best being ignored or at worst being disparaged by the surrounding society. Identity politics revolves around demands not for materials goods or resources, but for recognition of the dignity of one's ethnicity, religion, nation, or even one's unique characteristics as an individual...

Many of the young European Muslims who left the countries of their birth to fight for the Islamic State in Syria were trapped between two cultures, the traditional one defined by the piety of their parents, and the secular Western one in which they were brought up... Seeing the same phenomena through an identity lens rather than through the lens of religiously based culture better conforms to today's realities... [In America] there was the constant emergence of new identities: not just gays and lesbians, but transgender and intersex people.

He has half a point here. Yes, many young western Muslims, the children and grandchildren of comparatively assimilated immigrants, choose a global Islamic "identity" for themselves. Likewise, many secular westerners choose one of the exciting and ever multiplying array of sexual "identities". But it seems to me that both these phenomena are at least partly responses to the assault we have waged on our own culture and civilization this past half-century. Who wants to identify with a culture that reviles its own past, that blames itself for everything, that demolishes its statuary and denounces its greatest figures and insists that, while multiculturalism posits the equal value of all cultures, if you have to pick a villain pick the culture that built the modern world? In the void of modern western identity, people look elsewhere: Some find the new one-size-fits-all Islam, others find "intersexuality".

In the end, however, one of these is real, and the other isn't. And in those societies where the one buts up against the other (Denmark, say) the one that is real will one day steamroller the other. Samuel Huntington grasped the obvious; Francis Fukuyama is still trying to tap-dance around it.