What's it to be, Kavanaugh or hokum 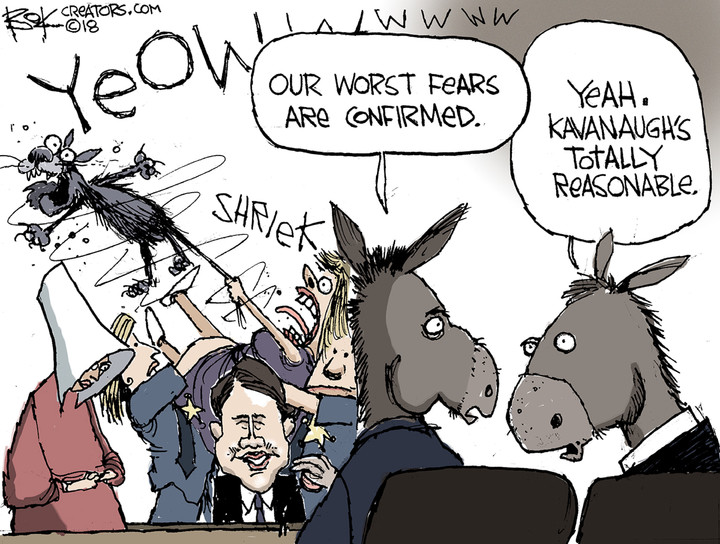 The start of Senate hearings on the confirmation of Brett Kavanaugh as a Supreme Court justice was more nearly a confirmation of how a lynch mob can be a democratic threat even when the rope is left at home.

First off, we had audience protesters disrupting the proceedings by shouting stupidities and insults and getting arrested, additional evidence of progressivism's decay. Then we had Democratic senators who interrupted proceedings 44 times in the first hour alone, a little less obnoxious than the protesters, but still uncaring about the lessons of civilization and the calm, cool deliberation needed for wise decisions and the survival of our republic.

The senators were woeful that they couldn't get their hands on still more documents that, if the context and common sense were ignored, might show something embarrassing about this nominee of President Donald Trump. The documents finally added up to something like 50,000 pages and were denied them on grounds of executive privilege, seeing as how they had to do with advice Kavanaugh gave President George W. Bush as an aide.

It apparently had not occurred to these seekers of dirt that they already had something close to a half million pages of documents, more than provided for the past five court candidates altogether. They include more than 300 decisions written by Kavanaugh as a circuit court judge. If the senators really believe the Supreme Court would become a tyrannous conservative monster with his addition, they might set aside a day sometime soon to read a few and see if Kavanaugh is as bad as they imagine.

Kavanaugh has taught law at Harvard, Yale and Georgetown and has won accolades from students, professors and alumni. The American Bar Association, hardly a bastion of conservatives, finds him eminently qualified to sit on the high court. He's even-handed, it's said, but he is also someone who thinks adherence to the Constitution is vital. For decades, the court put rule of ideologically informed egos over rule of law, and some fear Kavanaugh, in supposing he isn't a legislator, may embrace what does not fit neatly with their statist aspirations.

A foremost concern is that he will help repeal Roe v. Wade, in effect saying no more abortions in America. That's crazy in part because most states would still stick to current laws. And Kavanaugh has respect for precedent in given situations, and sweeping decisions of a reverse nature can be as upsetting as sweeping decisions of an initiating nature. Still, the Democrats will be asking him how he would vote on this and other issues, thereby illustrating their own convoluted understandings.

Democrats are still angry about a Republican-controlled Senate refusing to hold hearings in 2016 on Merrick Garland, President Barack Obama's pick as a court nominee. But Republicans can point to all kinds of Democratic shenanigans, too, and still more wrongs do not make a functioning republic. As former Secretary of State Condoleezza Rice said at the hearing, what we have in Kavanaugh is a man of excellent character and someone smart and humble enough to listen to other views.

His approval would likely give us a court balancing out the heft of an overly leftward past, functioning more nearly as it ought to function. The other option is yanking down basic principles, something akin to young leftist ruffians yanking down statues in appeasement of their own sentiments while damaging law, order and what's needed for a society to stay afoot.