In Iconic V-J Day Snap, Did the Famous Sailor 'Violate' the Famous Nurse? 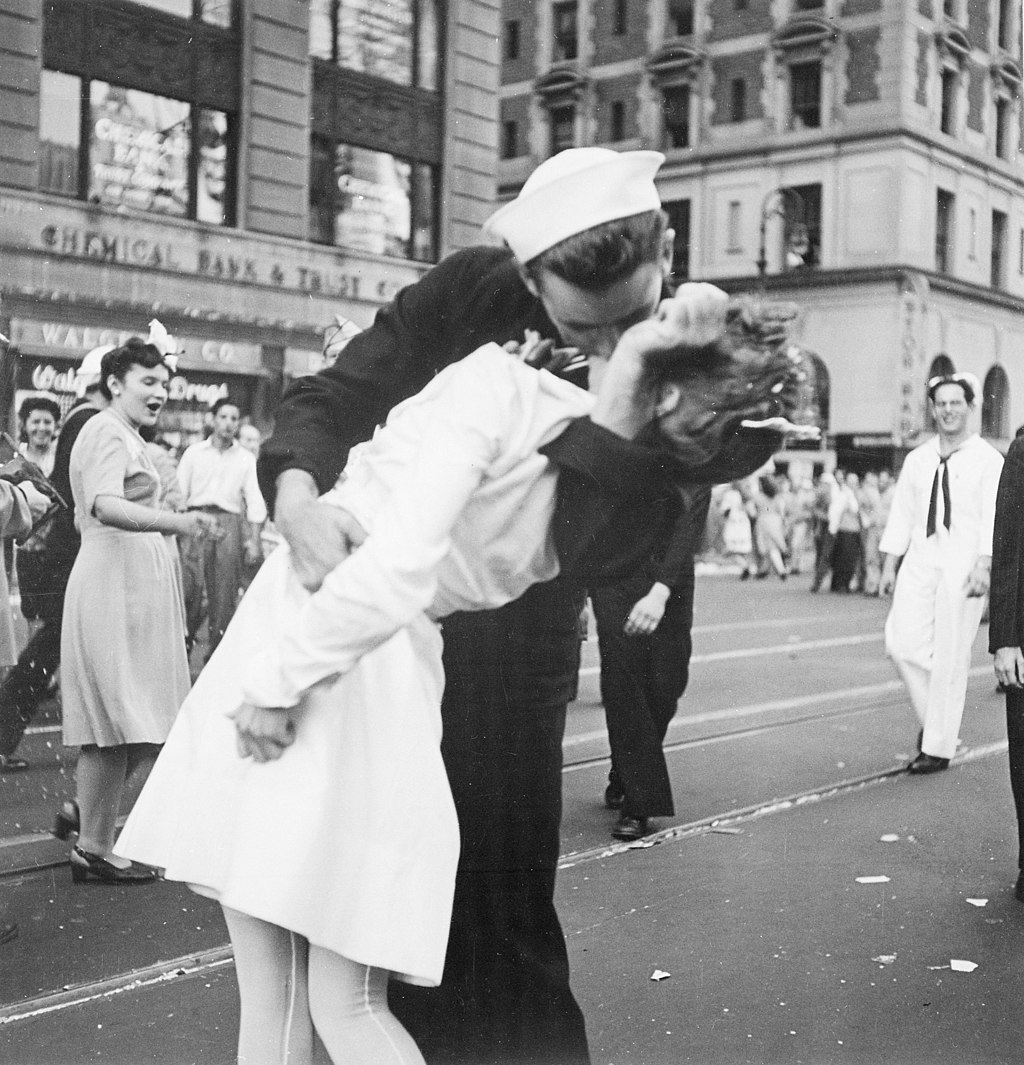 The most famous American photo of World War II is undoubtedly that of the four Marines planting the American flag on Iwo Jima. The second most famous is probably the legendary photographer Alfred Eisenstaedt's picture of an American sailor kissing a nurse in Times Square in New York City, when people were celebrating Japan's surrender.

The kiss was not, of course, merely a peck on the cheek. If it were, no photo would have been taken. And if one were, no one would have remembered it. The sailor clearly grabbed the nurse. She is leaning backward, bent at the waist; he is holding her up with both hands around her waist.

The photo has been back in the news because the woman, identified as Greta Zimmer Friedman, died on Sept. 8, at age 92. She was 21 when the picture was taken.

The sailor, later identified as George Mendonsa, mistook Friedman's dental assistant uniform for that of a nurse. He later explained that he hugged and kissed her because of his overwhelming gratitude for the work nurses had performed while he was in combat in the Navy, because of his elation over the war ending and because he had had a few drinks. As he put it, when he and Friedman were reunited in 2012 at the spot of their kiss, it was "the excitement of the war bein' over, plus I had a few drinks, so when I saw the nurse I grabbed her, and I kissed her."

Any American who looks at that photo today realizes just how different a time we live in.

If a man were to do that to a woman today, he would likely be charged with sexual assault, found guilty, be ordered to pay a serious sum of money to the woman, be sent to prison, be civilly sued and be labeled a sex offender — effectively ruining much of his life.

She, on the other hand, would be regarded as victim of sexual assault and labelled a survivor, and would seek psychological counseling.

Living in pre-feminist darkness, Friedman did not see it this way. As her son told the New York Daily News, "My mom always had an appreciation for a feminist viewpoint, and understood the premise that you don't have a right to be intimate with a stranger on the street. ...(But) she didn't assign any bad motives to George in that circumstance, that situation, that time."

One reason might be that she was a Jewish refugee from Hitler's Europe, and, unlike feminists in America, she knew real evil.

Given the context, the act was essentially innocent. Reinforcing its innocence are the facts that the kiss was very brief and Mendonsa's wife can be seen smiling in the background.

But in the feminist age of enlightenment in which we live, when it comes to any act of physical intimacy by a man with a woman, there is no such thing as "context." Unless there is a verbal "yes" accompanying every act by the man, the presumption is that the intimacy was a sexual assault, a form of rape.

Thus, in today's America, George Mendonsa is deemed to have committed an act of sexual assault. Context has no say.

On the Sarasota, Florida, waterfront there is a 28-foot statue of Mendonsa kissing Friedman. It clearly offends at least one Sarasota Herald-Tribune columnist. A few days after Friedman's death, Chris Anderson acknowledged that the statue "represents euphoria, innocence, romance, nostalgia and a level of unity and pride this country arguably has not seen since V-J Day." But as a someone who surely attended college and probably graduate school, he sees the darker side, saying, "Is it possible that thousands upon thousands of people over the last seven years have come to the Sarasota waterfront to unwittingly pose in front of a giant depiction of a sexual assault?"

Likewise, the writer of the New York Times obituary of Friedman felt compelled to note that "In recent years, some have noted its darker undertones." Among the examples cited was Time Magazine, which in 2014 had written, "many people view the photo as little more than the documentation of a very public sexual assault, and not something to be celebrated."

There is no question that there needed to be greater sensitivity to men's physical interactions with women, and that too many men did in fact get away with rape.

But America is not a better place — nor, for that matter, are American women happier — because we now consider George Mendonsa a sexual criminal and Greta Friedman a survivor of sexual assault.

For most Americans, America was — with all the flaws that did indeed have to be dealt with — a happier and more innocent place then. That's why there is a statue of that kiss at the Sarasota waterfront. And that's why "thousands upon thousands" of couples pose for pictures in front of it.

They are celebrating life, America, and men and women. At college, American kids are taught to fear all three.