What the Arab World Produces 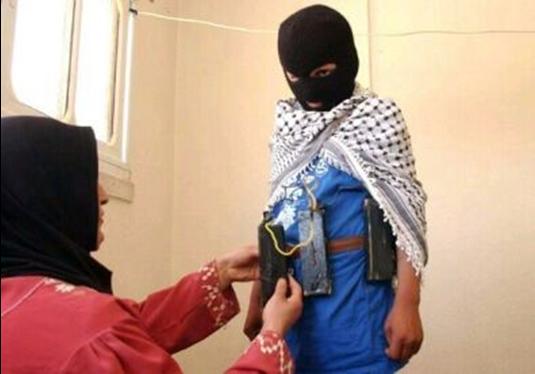 Seriously, do we really need a caption?

At least since the early part of the 20th century, aside from oil, the Arab world has produced and exported two products.

It has produced essentially no technology, medicine or anything else in the world of science. It has almost no contributions to world literature, art or to intellectual development.

According to the most recent United Nations Arab Human Development Reports (2003-2005), written by Arab intellectuals, Greece, with a population of 11 million, annually translates five times more books from English than the entire Arab world, population 370 million. Nor is this a new development. The total number of books translated into Arabic during the last 1,000 years is less than Spain translates into Spanish in one year.

ArabianBusiness.com reports that about 100 million people in the Arab world are illiterate; and three quarters of them are between the ages of 15 and 45.

As for Arab women, the situation is even worse. Nearly half of the Arab world's women are illiterate, and sexual attacks on women have actually increased since the Arab Spring, as have forced marriages and trafficking. And the exact number of women murdered by family members in "honor killings" is not knowable. It is only known to be large.

In Egypt, the largest Arab country, 91 percent of women and girls are subjected to female genital mutilation, according to UNICEF. Not to mention the number of women in the Arab world who must wear veils or even full-face and full-body coverings known as burkas. And, of course, Saudi Arabia is infamous for not allowing women to drive a car.

Another unhappy feature of the Arab world is the prevalence of lies. To this day, Egypt denies that it was the Egyptian pilot, Ahmed El-Habashi, who allegedly crashed an EgyptAir jet into the ocean deliberately. Vast numbers of Arabs believe that Jews knew of the 9-11 plot and avoided going to work at the World Trade Center that day.

So, then, is there anything at which the Arab world has excelled for the past two generations? Has there been a major Arab export?

As it happens, there are two.

The Arab world has no peer when it comes to hatred - of the Western world generally, and especially of Israel. Israel-hatred and its twin, Jew-hatred, are the oxygen that the Arab world breathes.

Two of the most popular songs in Egypt over the past decade have been "I Hate Israel" and the ironically named "I Love Israel."

Lyrics of the latter song include:

"May it [Israel] be destroyed. May it be wiped off the map. May a wall fall on it. May it disappear from the universe. G0D, please have it banished."

"May it dangle from the noose. May I get to see it burning, Amen. I will pour gasoline on it. I am an Egyptian man. I am not a coward."

"I Hate Israel" is so popular that it was the song which Egypt's pop star Chaaboula sang at the largest music festival in the Arab world, Morocco's Mawazine. The festival, one of the biggest in the world, featured Alicia Keys, Justin Timberlake, Ricky Martin and Kool and the Gang.

Some of the lyrics:

"I hate Israel, and I would say so if I was asked to.

"Two faces of the same coin, America and Israel. They made the world a jungle and ignited the fuse.

"About that [Twin] Tower, oh people. Definitely! His friends [Israel] were the ones who brought it down."

The other major Arab product and export has been violence.

Regarding Iraq under Saddam Hussein, Dexter Filkins, the New York Times correspondent in Iraq from 2003-2006 wrote: "Here, in Hussein, was one of the world's indisputably evil men: he murdered as many as a million of his people, many with poison gas. He tortured, maimed and imprisoned countless more. His unprovoked invasion of Iran is estimated to have left another million people dead."

Syria, too, has been a country of mass murder, torture, and brutal totalitarian rule — under the rule of Hafez Assad (in power 1971-2000), and his son, Bashar, the current killer-dictator who, among other atrocities, used Sarin gas against his own people in 2013.

In the ongoing Syrian Civil War, according to the United Nations, between March 15, 2011 and April 30, 2014, 191,000 Syrians, about a third of them civilians, were killed. In addition, 2.5 million people have fled Syria to neighboring countries, and 6.5 million have fled their homes within Syria.

In Algeria in the 1990s, Islamist terrorists engaged in wholesale murder of their fellow Algerians. That war cost Algeria about 100,000 lives, mostly civilian.

In Sudan, the Arab government's atrocities against the non-Arab population in the region of Darfur led to about 300,000 deaths and over a million refugees. In addition there was systematic rape of untold numbers of non-Arab women by Arab gangs known as the Janjaweed.

And then there was the terror unleashed by Palestinians against Israeli civilians in restaurants, at weddings, on buses, etc. The Palestinians are the modern fathers of terrorism directed solely at civilians.

There are two possible reactions to this description of the Arab world. One is that it is an example of anti-Arab "racism." That would be the reaction in much of the Arab world, on the left and among most academics — despite the fact that the description is of a culture and that the Arabs are not a race. The other is that is that it is tragically accurate. That would be the reaction of some in the Arab world and anyone who cares about truth. One such individual is an Arab. In Politico Magazine two weeks ago. Hisham Melhem, Washington bureau chief of Al-Arabiya, the Dubai-based satellite channel, titled his article "The Barbarians Within Our Gates." The subtitle is "Arab civilization has collapsed. It won't recover in my lifetime."

Islamic State, which is overwhelmingly Arab, is just the latest manifestation.