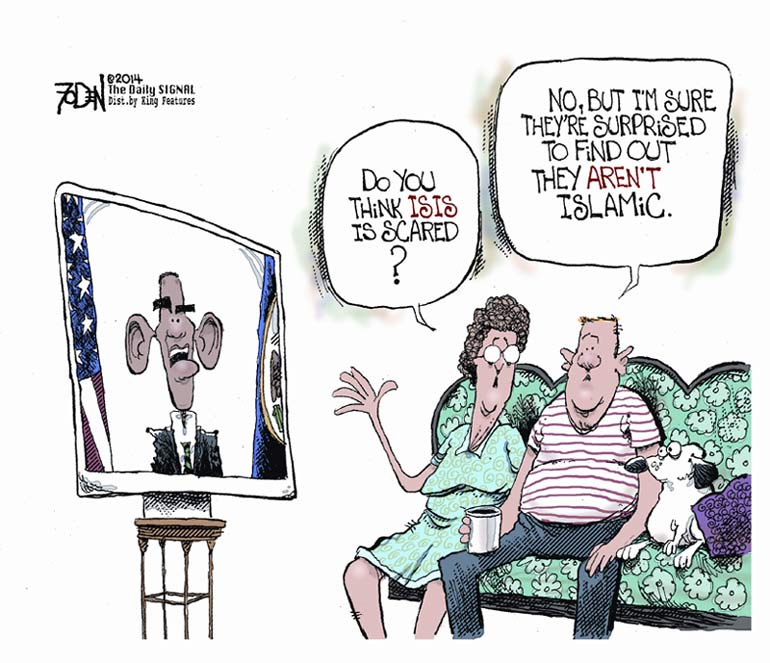 President Obama declared in his recent address to the nation that "ISIL is not Islamic."

But how does he know? On what basis did the president of the United States declare the a group of Muslims that calls itself "Islamic State" "not Islamic"?

Has he studied Islam and Islamic history and concluded that ISIL, Boko Haram, al-Qaida, Hamas, Hezbollah, the Taliban, Jamaat-e-Islami, Lashkar-e-Taiba (the group that slaughtered 166 people in Mumbai, most especially guests at the Taj Hotel,and which tortured to death a rabbi and his wife), the various Palestinian terrorist groups (all of which have been Muslim, even though there are many Christian Palestinians), and the Muslim terror groups in Somalia, Yemen, Libya and elsewhere are also all "not Islamic"?

Has he concluded that the Muslim Brotherhood, which won Egypt's most open election ever, is "not Islamic?"

And what about Saudi Arabia? Is that country "not Islamic," too?

Oh, and what about Iran? Also "not Islamic"?

Isn't that a lot of Muslims, Muslim groups, and even nations — all of whom claim Islam as their religion — to dismiss as "not Islamic"?

To be fair, these baseless generalizations about what is and what is not Islamic started with his predecessor, President George W. Bush, who regularly announced that "Islam is a religion of peace." And it is equally unlikely that his assertion came from a study of Islam and Islamic history.

The fact is that a study of Islamic history could not lead any fair-minded individual to conclude that all these Muslims and Islamic groups are "not Islamic." Neither Islamic history, which, from its origins, offered vast numbers of people a choice between Islam and death, nor Islam as reflected in its greatest works, would lead one to draw that conclusion.

Killing "unbelievers" has been part of — of course not all of — Islam since its inception. Within 10 years of Muhammad's death Muslims had conquered and violently converted whole peoples from Iran to Egypt and from Yemen to Syria. Muslims have offered conquered people death or conversion since that time.

The Hindu Kush, the vast, 500-mile long, 150-mile wide mountain range stretching from Afghanistan to Pakistan, was populated by Hindus until the Muslim invasions beginning around the year 1000. The Persian name Hindu Kush was proudly given by Muslims. It means "Hindu-killer." At least 60 million Hindus were killed by Muslims during the thousand years of Muslim rule. Though virtually unknown, it may be the greatest mass murder in history next to Mao's.

The groups named above are following some dictates of the Quran.

A few of many such examples:

"I will cast terror into the hearts of those who disbelieve. Therefore strike off their heads and strike off every fingertip of them" (8:12).

"When the sacred months are over slay the idolaters wherever you find them. Arrest them, besiege them, and lie in ambush everywhere for them. If they repent and take to prayer and render the alms levy, allow them to go their way. God is forgiving and merciful." (9:5)

"Fight those who believe not in Allah nor the Last Day, nor hold that forbidden which hath been forbidden by Allah and His Messenger, nor acknowledge the religion of Truth." (9:29).

There is also a different admonition in the Quran: "In matters of faith there shall be no compulsion" (2:256).

So a Muslim can also cite the Quran if he wishes to allow non-Muslims to live in peace.

The problem is that Muslim theological tradition, affirmed by many scholars, holds that later revelation to Muhammad supersedes prior revelation (a doctrine known as "abrogation"). And the Quranic verses ordering Muslims to fight and slay non-believers came after those admonishing Muslims to live with non-believers in peace and without religious compulsion.

The problem is that Muslim history, in keeping with the doctrine of abrogation, has far more often practiced the violent admonitions.

The problem is that more than 600 years after Muhammad, Ibn Khaldun, the greatest Muslim writer who ever lived, explained why Islam is the superior religion in the most highly regarded Muslim work ever written, "Muqaddimah," or "Introduction to History":

"In the Muslim community, the holy war is religious duty, because of the universalism of the Muslim mission and (the obligation to) convert everybody to Islam either by persuasion or by force."

In other words, Ibn Khaldun boasts, whereas no other religion commands converting the world through force, Islam does. Was Ibn Khaldun also "not Islamic"? And so much for the president's other claim that "no religion condones the killing of innocents."

None of this justifies bigotry against Muslims. There are hundreds of millions of non-Islamist Muslims (an Islamist is a Muslim who seeks to impose Shariah on others), including many "cultural" or secular Muslims. And individual Muslims are risking their lives every day to provide the intelligence needed to forestall terror attacks in America and elsewhere.

It is only a call to clarity amidst the falsehoods coming from the president, the secretary of state, and especially the universities.

As the courageous Ayaan Hirsi Ali, the Somali-born woman who leads a worldwide effort on behalf of Muslim women and for reforming Islam, asked in a speech at Yale University this month: If Islam is a religion of peace, why is there a sword on the Saudi flag?

If the president feels he has to obfuscate for the sake of gaining Muslim allies, so be it. But the rest of us don't have to make believe what he said is true.