Biden's Twin Catastrophes Put US in the Crosshairs 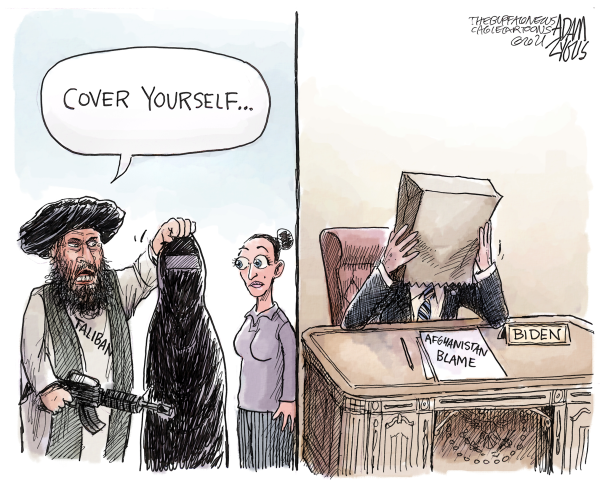 Will President Joe Biden’s matching calamities — in Afghanistan and at the US-Mexico border — merge into the mother of all epic fails? Cross your fingers, cross your toes, and hope otherwise.

Meanwhile, “the Taliban has released thousands of prisoners from detention facilities, including the Pul-e-Charkhi prison in Kabul and at Bagram Air Base,” congressmen John Katko of New York, Texas’ Michael McCaul, and Alabama’s Mike Rogers wrote National Security Advisor Jake Sullivan on Tuesday.

The ranking Republicans on, respectively, the U.S. House committees on Homeland Security, Foreign Affairs, and Armed Service added: “Prisoners reported to have been held in these detention facilities include thousands of Taliban fighters, senior Al-Qaeda operatives, Islamic State Afghanistan (ISKP) members, and former Guantanamo Bay detainees — all of whom pose serious concern to the security of the United States.”

Hard facts on this matter are elusive: Relevant documents tend to be secret. If declassified, they are heavily redacted or maddeningly dated.

Also, critics such as investigative journalist Andy Worthington argue that bitter rivals falsely accused some inmates, while innocents got vacuumed into custody with the guilty. Still, available details about these just-liberated terrorists and suspects should keep Americans sleepless in Seattle — and beyond.

•Mohammed Amin al-Bakri is a Yemeni captured in Thailand. A U.S. Detainee Review Board urged his incarceration as an “Enduring Security Threat.”

•Gulam Rabbani Abu Bakr, according to the UK’s Birmingham Post, led the al-Qaeda-tied Hizb-e-Islami Gulbeddin and is “believed to have been behind a series of car bombings in Kabul.”

•Abdul Jabbar, per The State of the Taliban, is the Islamic Movement of Uzbekistan’s “Deputy Commander Kunduz Province.”

•British Army Gurkhas caught Malang Zafar after he tried to ram them with a truck. This “chief of operations” for an Islamofascist terror group is suspected of masterminding a bus-bomb attack that murdered four German soldiers.

These could be distant distractions, notwithstanding that al-Qaeda hatched and nurtured the September 11 conspiracy while guests of the Taliban.

But the now-freed boys of Bagram are a clear and present danger to America, thanks to the president’s other mega-catastrophe: Biden has transformed Trump’s largely controlled southern frontier into an immigration superhighway.

Illegal aliens are racing through gaps in the wall whose construction Biden ordered stopped on Day One of his tenure. Things have rocketed downhill since.

Last month, Customs and Border Protection (CBP) encountered 212,672 illegal aliens at the southwest boundary — a 21-year high — up 419.6 percent versus July 2020. Since February, 1,035,352 illegals were nabbed at the US-Mexico line — up 458.2 percent versus a year ago, under Trump. CBP officers have been shot at from Mexico in four separate incidents since August 6 — two each near El Paso and San Diego.

Afghanistan’s freshly sprung jihadists likely are prowling Priceline for cheap flights to Ciudad Juarez, Mexicali, and Nuevo Laredo. With nearly 200,000 illegals cha-cha-cha-ing into America every month since March, why not race to the Rio Grande and join the conga line? And, if they can slaughter infidels to boot, then, indeed, Allah is merciful.

Rep. Katko warns: “President Biden’s botched foreign policy agenda and open-border policies have created a perfect storm that will put impending threats at the doorstep of our homeland just weeks away from the anniversary of September 11th.”