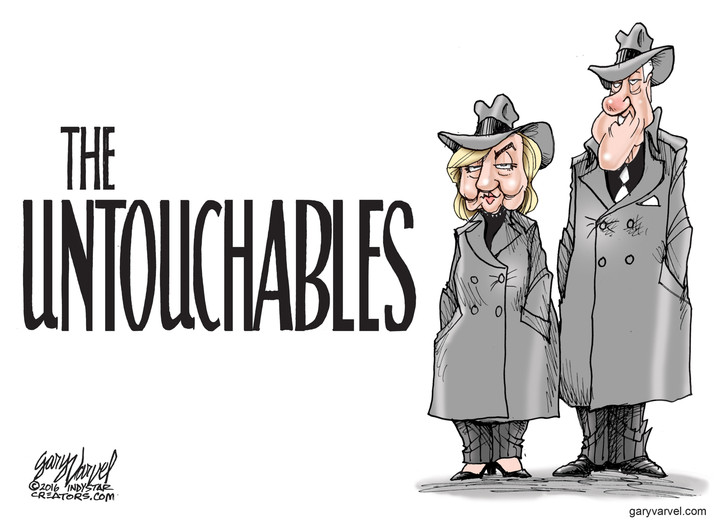 In the wake of a Democratic primary season and during the early phases of a general election when "rigged" has been the most emotive description of the economy and political system, Hillary and her enablers have conducted what appears to be a seminar in Rigged 101.

They couldn't have done a better job of tainting the perception of the outcome of the email probe if they were double agents for the RNC.

First, Bill Clinton had an impromptu "social" meeting with Attorney General Loretta Lynch. If Bill is a much reduced figure, he still has his unfailing instinct for the inappropriate. The confab was followed up with a report in The New York Times that Hillary might keep Lynch on as AG, as if to remove any doubt about Lynch's conflict of interest.

Finally, a mere three days later, FBI Director James Comey issued a stinging indictment of Hillary's conduct in the email case coupled with a discordant statement of absolute opposition to an indictment. It came just in time for President Barack Obama's inaugural joint campaign appearance with Hillary later that day.

If Hillary's abysmal numbers for honesty and trustworthiness don't drop further, people aren't paying attention. The email episode bears all the hallmarks of a Clinton scandal.

The Clintons always move the ethical goal post so that anything short of prosecutable criminality is supposed to be considered acceptable and a kind of exoneration.

They rely on mincing distinctions. To such classics as "I didn't inhale" and "it depends on the meaning of 'is'" can be added the latest distinction without a difference, courtesy of Comey, this one between "extremely careless" (his characterization of Clinton's conduct) and "gross negligence" (the standard set out in the relevant criminal statute). Comey's words could easily be mixed and matched differently and mean the same thing - what's the difference between "gross carelessness" and "extreme negligence"?

They fall back on staggered defenses as they are steadily rendered inoperative by the facts. I didn't have sex with that woman, Monica Lewinsky becomes, Now that you mention it, I did, only you can't impeach me for it. Or, I didn't send classified material becomes, I meant that it wasn't marked classified and even if it was, hey, it's not a crime.

Comey argued that Clinton shouldn't be prosecuted for violating the law in the absence of aggravating factors compounding her offense. But a less generous account of her conduct would find such aggravating factors: She was the secretary of state, implying the need for more care rather than less; she set up her email system to evade federal records laws and freedom-of-information requests; she lied about why she set it up; she persisted in her private system despite getting warned about its perils.

Comey clearly concluded that Hillary is simply too big to indict. A major political party has, for reasons that will escape most observers, put all its eggs in her basket. It's not as though Hillary is a fresh face, a bipartisan healer or a transformational figure. She is a barely adequate political talent with exceptional survival skills honed over a couple of decades of scandal. In other words, she is Michael Dukakis with a broken ethical compass.

At their joint appearance in North Carolina, Obama did all he could to pretend Hillary had fired up the crowd. Then, he stepped to the lectern to show how it's done. In basketball terms, it was a little like watching Steph Curry play a game of 21 with the second-string point guard on the Washington Generals. Just not fair.

Both political parties this year have chosen corrupting nominees. Republicans fully on board the Trump Train must routinely defend the indefensible, or at least avert their eyes from it. In the Clintons, Democrats are in bed with two operators whose idealism long ago got inextricably mixed into a toxic stew of ambition and greed. The party has had to stoop to defend their recklessness before, and will inevitably again.

The email scandal shows that Clintons play by their own rules and assume, correctly as it happens, that they are famous and powerful enough to escape the worst consequences. But that is, as she and her husband like to say, old news.