] Between the competent and the complainers - Garrison Keillor

Between the competent and the complainers 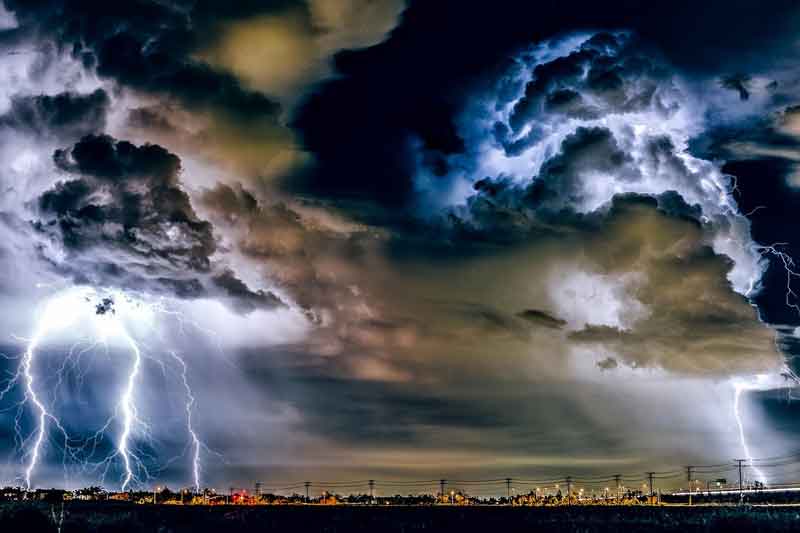 We sat out on our terrace in New York the other night, she and I, and cherished the feel of summer, a great blessing to us stoical northerners unaccustomed to paradise, so we contemplate all that is to come, the first rhubarb and strawberries, strawberry-rhubarb pie, sweet corn, fireflies flashing each other, the light produced by the oxidation of luciferin — one of those insignificant facts you carry around, waiting for a chance to dazzle someone with.

If I were a firefly, I'd say to a female, That's the oxidization of luciferin there, you know, and she'd be impressed and we'd mate and then I'd die.

I look forward to the next big storm, purple sky, lightning ripping the sky, volleys of thunder, so I can be calm and reassuring, a manly role, though I'm the last person you'd want in a real emergency. If I tried to give artificial respiration, I'd probably suffocate the patient.

The pandemic is easing toward an end, the sort of good luck it is bad luck to talk about, so forget what I said. The country is divided, but when was it otherwise? We don't get many Montanans or Dakotans visiting us in Manhattan. We had relatives who disappeared down South and joined a church that is opposed to literacy and people speak in tongues and it's hard for us to understand them. It's too big a country to be united, so we have a loose confederation of nations, vegan nation coming into prominence as the gardens ripen, and earbud nation, which doesn't engage in conversation at all, and the nation of the progressive conquistadorista Ocasio-Cortez that seeks to make us ride bikes and be reeducated and write pronouns on our foreheads.

These deep divisions will fade with time and be succeeded by others. But the deepest division is long-standing, between the competent and the complainers, the doers and the dreamers, the professionals and people content to be passengers on the bus.

My competence is editing, not writing, but I belong to the typewriter age so I have a friend in Wisconsin whom I call to say, "I've been trying for half an hour to make the screen brighter" and he says, "Go to System Preferences, click on Display, and you'll see the brightness scale." And the screen gets bright.

I defend my competence, slender as it is, by sitting up here on the 12th floor out of range of ticks that carry bacteria that can fog your brain. You hike the Adirondacks and a week later you're unable to spell "cat." I stay home. There are excellent picture books about the Adirondacks and a person needn't go see it firsthand any more than you need to be marched to the gallows to see what that's like. Just read In Cold Blood.

My niece got a bad case of poison ivy last week and had to go through the misery of the American health care system, which is no system at all but a conspiracy of chaos. She is French. The French have a system. You provide your medical history, they give you a card, you can present it to any doctor or hospital and they look you up in the system. You don't have to go to an ER and fill out four pages of questionnaire and sit for four hours waiting.

There is no poison ivy on the 12th floor so I've avoided health care and thus I can write this cheerful essay. Were I afflicted with poison ivy, this would be a searing indictment of the indifference of American society to my suffering. It is the elevation that makes the humorist and also old age: you retire and you have the beautiful freedom of irrelevance. More divisions are on the way but thunderstorms and fresh strawberries pull us together.

On the 12th floor, we're talking about what to have for dinner tonight. We like it up here so we won't go to a restaurant where some pigeon-borne virus might make us sick and send us to the ER. We'll eat on the terrace as the sun goes down. She votes for a big salad, I vote for a ground sirloin hamburger on a bun with a slice of onion, a slice of lettuce, a slice of Havarti cheese, and plenty of mustard. We compromise on a big salad with some onion in it and little chunks of Havarti. Thanks to sudden memory loss, I'm fine with that.

I recited "What'll I Do?" at Carnegie Hall for a show honoring Irving Berlin on his 100th birthday and he sat at home and watched me do it on TV and he was struck, so his daughter told me, by how good his lyrics sounded. He'd heard them sung by Sinatra and Julie London and everybody and their uncle but never heard them spoken and it touched him.

He's right, the song is perfect, and why not? He wrote it in 1923 when the woman he loved, Ellin Mackay, was sent on a tour of Europe by her wealthy father who didn't feel good about her marrying an immigrant songwriter who happened to be of the Jewish persuasion. But she came back and married him at City Hall in 1926 and that was that. Heather Masse and I did the song together so I could sing harmony on the chorus.