Judges' anti-Trump end does not justify their means 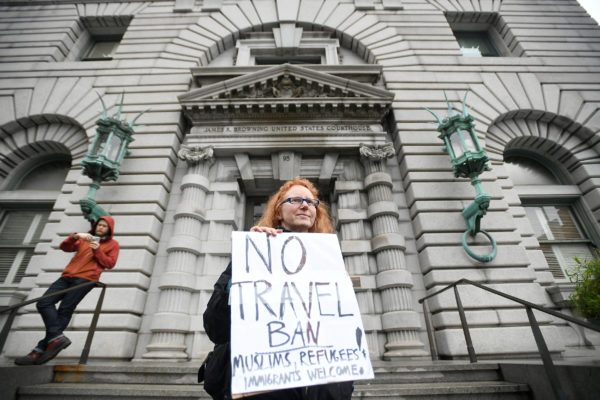 Donald Trump is unfit to be president, it is said, and sure enough there are problems. But what should be more often said is that there are a bunch of judges out there who are unfit to be judges.

Concerning Trump's executive order to temporarily ban some visitors from terrorist-ridden countries, they are usurping power that is not theirs, making a mockery of the U.S. Constitution and putting politics above rationality.

We can look to the U.S. Supreme Court for rescue, but that's not certain. Meanwhile, the latest villains - 10 judges on the 4th Circuit Court of Appeals - have demeaned the judiciary by squashing that presidential document. Their grounds?

Well, what its words say are OK and all of that, we are told, but based on what Trump barked during his campaign, he has an animus against Muslims. He does not like them. He is intolerant of them. He's got this religion thing up his sleeve. Therefore, the document be damned.

Let's come back to this after reviewing some basics.

The executive branch has the clear-cut authority to prevent foreigners from entering this country as long as a reason is given that, on the face of it, makes sense. Those foreigners have no constitutional rights, and the text of an executive order is what any court review should stick to. Trump's plainly valid order makes no mention of Muslims, and the affected countries were all declared to be of particular terrorist concern by the Obama administration. Some bad sorts have come here from them in the past, and a fault all the countries share is administrative disorder of a kind that affords little in the way of records and procedures to make sound vetting simple.

The idea is to slow travel down to the point that some improved techniques can just maybe be put in place. The reason is national security, your life and mine, avoidance of the kind of horror that recently took place in Manchester, England. But now we have judges saying they smell ulterior, anti-Muslim bias at work because, after all, Trump once called for a Muslim ban.

Consider, for a moment, that millions of Muslims from around the world can still come here and that what this ruling says is that supposed, unprovable purposes count for more than the deed. If the ruling holds up, the rule of law will have been let down. It presumes that whims of the judiciary takes precedence over statutes, and even though the judges cite a precedent, analysts show they've got it wrong and another precedent tops it, anyway. So does everyday common sense.

What's really up here is judges having their own animus against Trump, and, well, they have that right. But they do not have a right to misuse their positions to hold him in check. Let's say the presidency really is cracking up. Do we want the judiciary to crack up, too? Does that calm things down, or is it instead an outright assault on constitutional, democratic norms without which despotic elites take charge and the people are dismissed? Trump's words have been said to demean the judiciary, but these actions outdo those words.

As president, Barack Obama managed to put large numbers of overreaching activists in judges' seats, and Trump has a chance to rectify some of that with his own nominees, though the process won't be instantaneous. Meanwhile, we are having a kind of governmental mutiny in felonious, endangering leaks of classified information, and there is congressional combustion as melodramatic Democratic posturing poses as patriotism.

Still more theater of the absurd is transpiring. We need as a nation to get hold of ourselves. We need to do what's right, and that includes the White House. We need to remember that one reason the end does not justify the means is that the means can be a much bigger deal than the end. Jay Ambrose
(TNS)