Vote the Dems into the Smithsonian 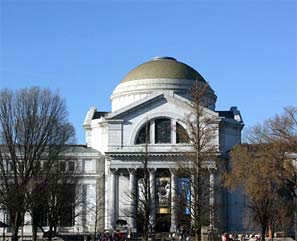 The vital mission of the Republican-Right in November 2022 and '24 should be to demolish the Democrat Party and relegate it to the Smithsonian, amid the Whig and Know Nothing parties.

The Democrat Left have become purveyors of poverty, chaos, danger, and death.

Bloomberg reports that, compared to 2021, inflation will cost the average U.S. household $5,200 this year, or $100 per week, for the same basket of goods. Biden's five-steps-forward, eight-steps-back economy is making Americans poor again.

Biden's figure does not include an estimated 620,000 got-aways who invaded America without even greeting the Border Patrol. Also, 42 foreigners on the terrorist watch list tried to enter the U.S. during the Biden-Democrat Era, including 23 at the southern "border."

From classrooms to board rooms, Democrats are pushing Critical Race Theory, through which they harass whites as privileged oppressors and infantilize blacks as helpless victims. Everything — from troops in U.S. barracks to erasable white boards in physics classes — is bigoted to today's race-possessed Left.

• The Democrat Party endangers Americans, through its policies and a recent embrace of Sandinista-flavored intimidation, thuggery, and political violence.

Democrats in 2020 defunded the police in numerous cities and states that they control. When handcuffed cops somehow arrest career hoodlums, criminal-hugging district attorneys such as San Francisco's Chesa Boudin, Manhattan's Alvin Bragg, Los Angeles' George Gascon, and their ilk too often massage lawbreakers' wrists or flat-out refuse to prosecute them.

• Worst of all, the Democrat-Left has become the Party of Death.

Atlanta, Milwaukee, Portland, and at least 12 other Democrat-run cities suffered record-breaking homicides in 2021, largely due to Leftist mayors and city councils that inflicted pro-criminal policies.

Democrat lawmakers have rejected bills that would protect babies who, somehow, survive abortions. According to today's Democrat ghouls, mothers should be free to kill their babies until the moment of birth.

Republicans and Libertarians henceforth should compose America's two-party system. The Democrats' deadly Wokistani socialism should be deported to Cuba, Nicaragua, and Venezuela — where it belongs.

Until that happy day, the Republican-Right must perform a priceless public service: Banish the Democrat Party to the National Museum of American History, where it no longer could terrorize the American people. Tourists then could marvel at the Democrat Party — neutralized, behind glass, and between Dorothy Gale's ruby slippers and Archie Bunker's easy chair.