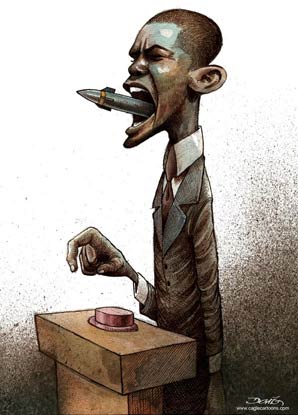 Apparently, Republicans aren't the only ones made a little crazy by the rise of Trump.

As I travel in the United States and overseas, Donald Trump is all anybody wants to talk about. Even President Obama can't resist, even though he probably should.

Just yesterday, The Washington Post's Greg Jaffe wrote a piece entitled, "Obama assails Trump's wall in Rutgers commencement speech." In his speech, the president never mentioned Trump by name, but made multiple references that were clearly about The Donald.

The president has already spoken on the record a few times about Trump's 2016 campaign. Who thinks it is appropriate or helpful for the president to use no less than the distinguished, formal forum of a commencement address to lambaste Trump?

In one of his swipes at Trump, President Obama said, "If we get on a plane, we say we really want a pilot to be able to pilot the plane. And yet, in our public lives, we certainly think, 'I don't want somebody who's done it before.'"

It is ironic that President Obama, who had no real relevant experience when he was elected president, now calls for political leaders with experience.

The president's ego would never let him see the similarities he has with Trump.

Yet the president doesn't have any inhibitions about highlighting Trump's political inexperience. Suddenly, the president thinks the best solutions are offered by seasoned pros. It's almost amusing.

Anyway, the president's obsession with Trump is not flattering. Obviously, he wants to do what he can to weaken Trump politically, but his preoccupation actually makes the presumptive GOP nominee look stronger.

The best thing Obama could do for Hillary Clinton and the Democratic ticket is to not let Trump get under his skin and to mostly stay in the background. His job approval numbers have been slowly improving this year, but getting into hand-to-hand combat with Trump will make the president look small.

To make a difference for his party, the president's approval rating needs to get over 50 percent. It stands to reason that the Democrats will have an easier time in November if a majority of people think more of the same is desirable.

Regardless, Obama isn't exactly ending his presidency on a high note in any category. Most people have tuned this president out. He has limited appeal beyond a core group of liberals who will never support Trump anyway.

Being part of the 2016 shouting match won't help his legacy or Clinton's chances in November. Actually, the best politics for both sides would be for Obama to talk less about Trump, and for Trump to talk more about Obama.