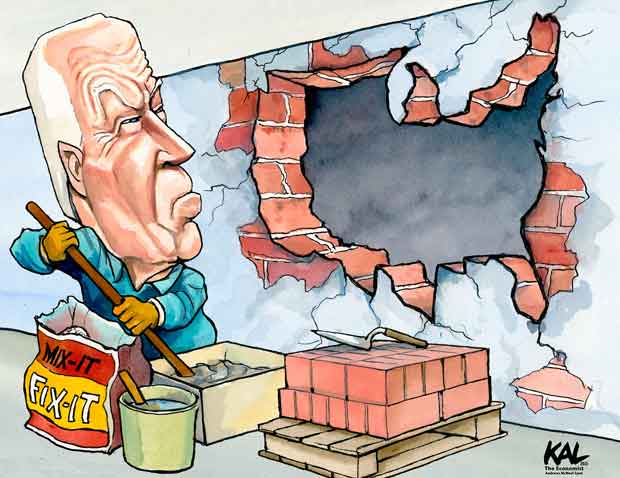 "Parts of our country are backsliding," Biden moaned Wednesday. "The days of Jim Crow, passing laws that harken back to the era of poll taxes, when Black people were made to guess how many beans – how many jelly beans in a jar, or count the number of bubbles in a bar of soap before they could cast their ballot."

Biden said this via satellite to the National Action Network. Its founder, Al Sharpton, is a museum-quality racial arsonist who has called Jews "diamond merchants" and Fred Harari, who is Jewish, a "white interloper."

In 1995, Sharpton's anti-Semitic slurs may have inspired Roland Smith, a crazed protester, who shot up and ignited Freddie's Fashion Mart, Harari's store in Harlem. The ensuing inferno killed seven. Smith fatally shot himself.

Rather than bring Americans together, Biden's inflammatory rhetoric pits citizens against each other. His needlessly incendiary language is like complaining that a supermarket that lacks kosher food harkens back to Kristallnacht.

Biden also trivializes the pain of Jim Crow's genuine victims while diluting the cruelty of these mandates and their 76-year-long, "separate-but-equal" reign of terror.

"This makes Jim Crow look like Jim Eagle," Biden told journalists on March 25. "I mean, this is gigantic what they're trying to do, and it cannot be sustained." Male bald eagles typically weigh 10 times as much as an average one-pound crow. Does Biden truly believe that Georgia's "Jim Eagle" law is 10 times worse than Jim Crow's multifaceted, anti-Black voter suppression?

Poll taxes once made voting too expensive for poor citizens, many Black. Georgia's new law imposed no poll tax.

Before 1965, Alabama's literacy test asked prospective voters 68 questions, including: "If a state is a party to a case, the Constitution provides that original jurisdiction shall be in ________." By refusing to hear Texas' anti-vote-fraud case last December, today's Supreme Court forgot that it is the correct answer.

Also, "The Constitution limits the size of the District of Columbia to ________." Answer: Ten square miles.

Michigan's Jim Crow Museum observes that in many a lynching, "The victim was an example of what happened to a Black man who tried to vote." Georgia did not reinstate lynching.

Northern Freedom Riders headed South to register Black voters in 1961. They endured beatings and fire-bombings. Georgia has resurrected neither.

Elsewhere, investigators found the bodies of black Freedom Summer college students Henry Dee and Charles Moore, a cadaver in a CORE T-shirt, and five other corpses.


That was Jim Crow, not merely requiring voters — black and otherwise — to show ID, as do 36 states (including Biden's blessed Delaware). Blacks routinely present ID at airports, banks, libraries, hotels and millions of other venues daily.

For Biden to compare Georgia's vote-expansion bill with the Jim Crow that slaughtered Chaney, Goodman, Schwerner, Dee and Moore is morally grotesque, ĂĽber-divisive, and a profound insult to those who were killed while crushing Jim Crow and securing black voting rights.

And, remember: The Jim Crow laws were passed, signed, and brutally enforced by Democrats, not Republicans. Perhaps that's why Biden cannot shut up about Jim Crow. Those racist rules were his party's handiwork.